Orthodox patriarch released from hospital ahead of meeting with President Biden 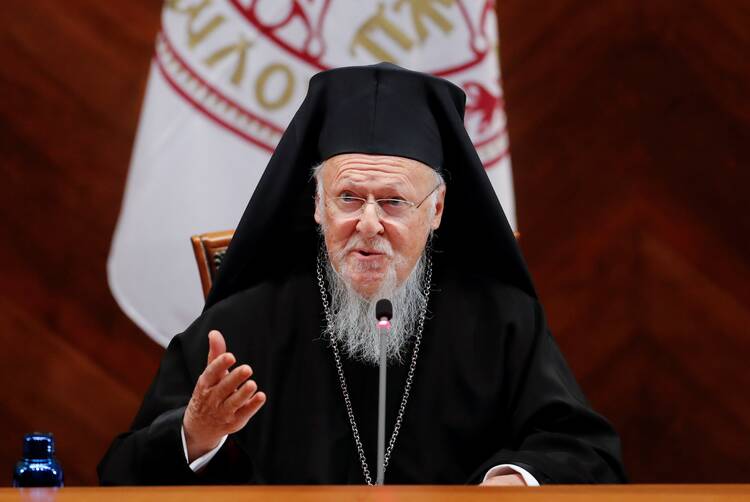 Ecumenical Patriarch Bartholomew, the spiritual leader of Eastern Orthodox Christians, was released from a Washington hospital Monday morning after an overnight stay early in his 12-day visit to the United States.

Bartholomew, 81, was scheduled to meet with President Joe Biden later Monday at the White House, and also to meet with Secretary of State Antony Blinken.

The patriarch “is feeling well and is ready to continue” his official visit Monday, according to a tweet from Archbishop Elpidophoros of the Greek Orthodox Archdiocese of America.

The patriarch “is feeling well and is ready to continue” his official visit Monday.

Bartholomew is the patriarch of Constantinople, based in Turkey. He is considered first among equals among Eastern Orthodox patriarchs, which gives him prominence but not the power of a Catholic pope. He does directly oversee Greek Orthodox and some other jurisdictions, although large portions of the Eastern Orthodox world are self-governing under their own patriarchs.

Bartholomew was brought to George Washington University Hospital on Sunday night after he felt “unwell” due to the long flight here on Saturday and the busy schedule of events, according to the Greek Orthodox archdiocese. The hospitalization was recommended by his doctor “out of an abundance of precaution,” the archdiocese said.

Making the latest of several trips to the country during his 30 years in office, Bartholomew is expected to address concerns ranging from a pending restructuring of the American Greek Orthodox archdiocese to his church’s minority status in his homeland, Turkey. His schedule Monday includes a visit to the embassy of Turkey in Washington.

Bartholomew is expected to address concerns ranging from a pending restructuring of the American Greek Orthodox archdiocese to his church’s minority status in his homeland, Turkey.

Also on Monday, Bartholomew is scheduled to give a speech via videoconference for the Museum of the Bible in Washington, according to the latest schedule released by the archdiocese. An earlier version of his schedule included an in-person visit.

In the evening, he is scheduled to attend a dinner at Georgetown University hosted by its president, John DeGioia, and Cardinal Wilton Gregory, the Roman Catholic archbishop of Washington, D.C.

On Thursday, he is scheduled to receive an honorary degree from the University of Notre Dame in an event highlighting efforts to improve Orthodox-Catholic ties, centuries after the two churches broke decisively in 1054 amid disputes over theology and papal claims of supremacy. And on Nov. 2, he is scheduled to preside at a door-opening ceremony at St. Nicholas Greek Orthodox Church and National Shrine in New York City. The shrine replaces a church destroyed during the Sept. 11, 2001, terrorist attacks on the World Trade Center.

Associated Press religion coverage receives support from the Lilly Endowment through The Conversation U.S. The AP is solely responsible for this content.