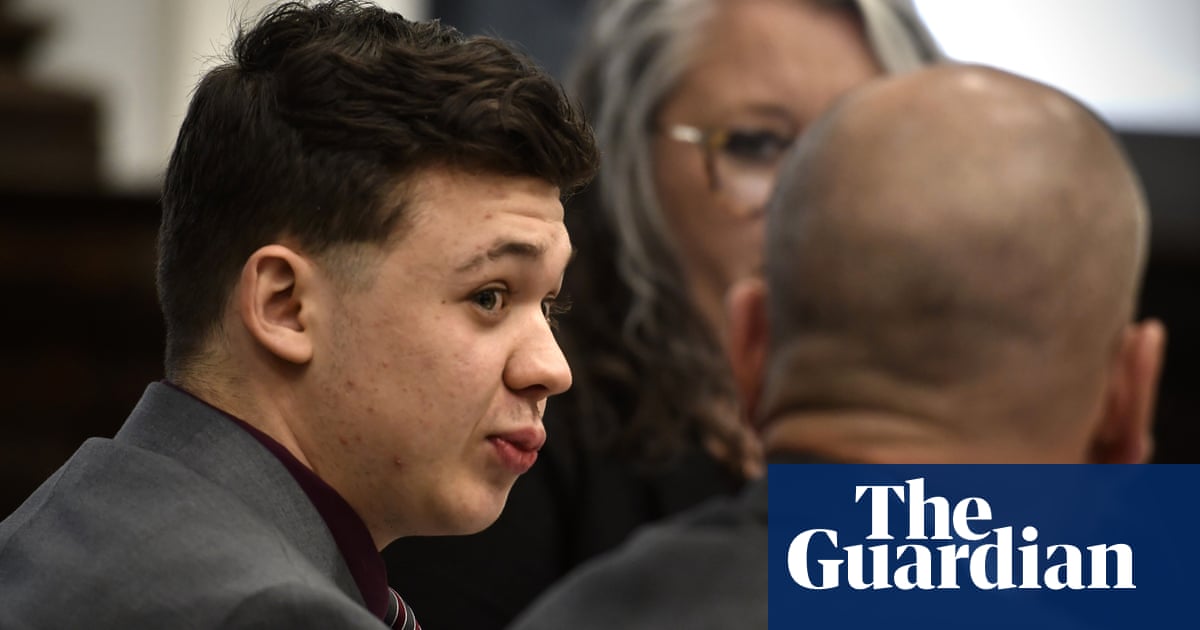 Kyle Rittenhouse’s claim that he is “not a racist person”, made to Tucker Carlson, landed in an atmosphere of controversy and condemnation ahead of the interview airing in full on Fox News on Monday night.

Rittenhouse, 18, was acquitted on Friday on charges stemming from killing two men and wounding one during unrest after the shooting of a Black man by a white police officer in Kenosha, Wisconsin, last year. Rittenhouse is white, as were the men he shot.

Rittenhouse has attracted support from conservative groups and lawmakers, some of whom, on the far right of the Republican party, have celebrated his acquittal and offered him internships. Before the trial, Rittenhouse was photographed in a bar with apparent members of the far-right Proud Boys.

His attorneys have said he is not a white supremacist. Many in the media have said otherwise.

On Saturday, the MSNBC host Tiffany Cross said: “The fact that white supremacists roam the halls of Congress freely and celebrate this little murderous white supremacist, and the fact that he gets to walk the streets freely, it lets you know these people have access to instituting laws, they represent the legislative branch of this country.”

Speaking to Carlson, who also made a documentary on the case, Rittenhouse said: “I’m not a racist person. I support the [Black Lives Matter] movement, I support peacefully demonstrating.”

Rittenhouse’s lawyer, Mark Richards, told CNN he “did not approve” of Carlson filming a documentary with Rittenhouse, and “threw [the film crew] out of the room several times”.

“I don’t think a film crew is appropriate for something like this,” Richards said.

Rittenhouse was 17 when he traveled 20 miles from his home in Antioch, Illinois, to Kenosha, in the wake of the shooting of Jacob Blake on 23 August. That shooting and the protests in Kenosha became part of a national reckoning over police use of force against Black people, after the murder of George Floyd by a Minneapolis police officer in May.

Rittenhouse was armed with an AR-style semiautomatic rifle when he joined others who said they were intent on protecting private property on 25 August.

Prosecutors argued that the teenager as a “wannabe soldier” who went looking for trouble. Rittenhouse claimed he was attacked and in fear for his life. A jury found him not guilty on charges of homicide, attempted homicide and reckless endangering in the deaths of Joseph Rosenbaum, 36, and Anthony Huber, 26, and the wounding of Gaige Grosskreutz, now 28.

Derrick Johnson, the president of the National Association for the Advancement of Colored People (NAACP), said the verdict in the case was hard for Black Americans to take.

“Here you have a 17-year-old who illegally purchased a gun, traveled across state lines to protect property that was not his, for owners who did not invite him, and he put himself in harm’s way based on the rhetoric that he’s seen on social media platforms,” Johnson told CBS’s Face the Nation.

He called the verdict “a warning shot that vigilante justice is allowed in this country or in particular communities”.

Protesters chanted, “No justice, no peace” and “Anthony and Jo Jo”. A couple carried long guns.

The Rev Jesse Jackson, 80, was scheduled to appear but did not. Organizers said he was working with congressional leaders to ask that the Department of Justice investigate further prosecution. A release from Jackson’s Rainbow Push Coalition said the justice department should consider aiding and abetting charges for Rittenhouse’s mother.

“The verdict of not guilty is very revealing of the state of criminal justice in America,” Bishop Grant, the Rainbow Push Coalition national field director, said in a statement.