After getting a lot of attention over the last few days thanks to the so-called Reddit Raiders, topping $30 during yesterday’s trading, (paper) silver prices are fading fast this morning – following CME’s margin hike overnight – erasing almost all of the Monday’s gains. 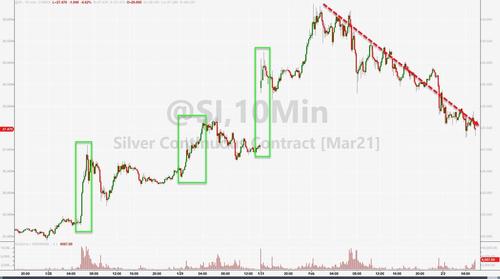 Monday saw another massive inflow of funds into the SLV (Silver ETF), but we note that the value of the ETF is significantly discounted to its NAV… 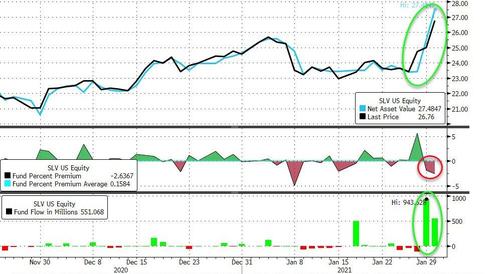 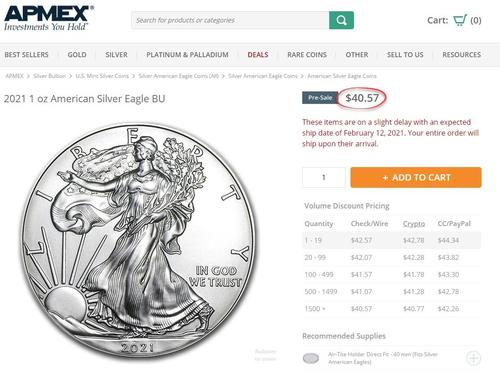 But as Peter Schiff pointed out in a recent podcast, silver is a fantastic buy right now even absent the attention of message board investors. In fact, silver was poised to go up even before the Reddit crowd looked its way.

Overall, SchiffGold.com says that the fundamentals are extremely bullish for silver in the long-term, without or without a push from the Reddit Raiders. 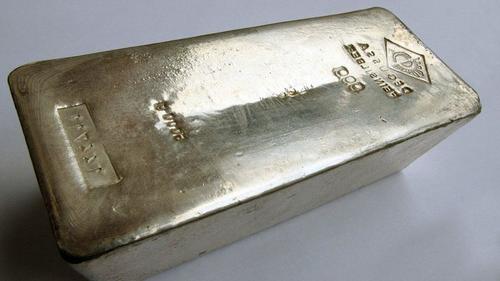 In the first place, silver is at its core a monetary metal. Silver has been used as money for thousands of years. As government fiat currencies devalue, silver and gold both tend to hold their value as the prices increases in dollar-terms. Currently, the Federal Reserve and other central banks are creating money like never before. The money supply increased at a record pace last year as the Federal Reserve responded to the COVID-19 pandemic. And there is no sign that the money printing will abate.

In fact, the Fed can’t exit from this extraordinary monetary policy. It has to continue monetizing the ever-incrasing government debt and hold interest rates artificially low. If it were to back off quantitative easing and allow interest rates to rise, it would collapse the debt-ridden US economy. On the other hand, if it continues this reckless money creation, it will eventually crash the dollar.

Either scenario is bullish for silver.

Fundamentally, central banks destroy the value of fiat money by printing more and more and more of it. On the other hand, real money cannot be created out of thin air. Its value is intrinsic. Since silver and gold are scarce resources, the marketplace ultimately determines their underlying value – not political calculations or central planning manipulation. You can’t print silver. As a result, in times of great economic turmoil, and inflationary central bank policy, silver and gold tend to maintain their purchasing power, while fiat money can potentially become worthless.

While the Reddit Raiders could create a short squeeze in silver futures and drive the price higher, ultimately, silver will stand on its underlying value. Looking long-term, buying silver at $27 an ounce is a bargain – with or without the attention of Reddit investors.

The Fed’s expansionary monetary policy has already driven investment demand for silver to five-year highs. Silver coin and silver bar sales in the US have helped push the big gains in investment demand. Retails sales were projected to rise by 62% on the year.

Second, silver remains historically undervalued compared to gold. Even with the recent run-up in the silver price, the silver-glold ratio is still over 60-1. This is historically high.

The silver-gold ratio simply tells you how many ounces of silver it takes to buy 1 ounce of gold. The average in the modern era has been between about 40:1 and 50:1.

In 1792, the gold/silver price ratio was fixed by law in the United States at 15:1. France mandated a ratio of 15.5:1 in 1803. Faced with the challenges of a bi-metallic monetary system with fixed exchange rates and the aftermath of a worldwide financial crisis, the US Congress passed the Coinage Act of 1873. Following the lead of other Western nations, including England, Portugal, Canada, and Germany, this act formally demonetized silver and established a gold standard for the United States.

With silver playing a smaller role as a monetary metal, the silver-gold ratio gradually spread. The modern average over the last century has been around 40:1.

Since the world went to a total fiat money system, there seems to be some correlation between the silver-gold ratio and central bank money-creation. During periods of central bank money-printing, the gap tends to shink. In fact, it plummeted in the aftermath of the 2008 financial crisis as the Fed engaged in extreme monetary policy.

Looking at the current silver-gold ratio indicates that silver is still undervalued. That means, in effect, we have silver on sale.

While silver is fundamentally a monetary metal, more than half of global demand comes from industrial and technological applications. In the 20th century, photography was the primary industry using silver. That changed with the advent of digital photography. But silver’s unique chemical properties make it indispensable in all sorts of modern applications and demand is no longer supported by just one or two industries. In the first decade of the 21st century, silver demand for electronics, computers, healthcare and other hight-tech industries expanded dramatically. This reflects two of the metal’s key characteristics — it has the highest thermal and electrical conductivity of any metal, and it is widely available. It also has anti-bacterial properties.

As you might expect, non-investment silver demand dropped in 2020 due to the economic contraction sparked by government response to the COVID-19 pandemic. March and April saw precipitous drops in demand, but the market has shown signs of recovery since. Analysts expect industrial demand will rebound further as the global economy begins to recover from the impacts of the coronavirus pandemic.

Silver demand will likely get a boost from the push toward solar power and other green energy initiatives in the coming years. Solar power generation is expected to nearly double by 2025 according to a report released last summer by the Silver Institute. Even if the global economy recovers more slowly than expected in the wake of the pandemic, green energy demand for silver will likely remain robust. Analysts expect many government stimulus plans will include funding for green initiatives.

On the supply side, mine output fell sharply in 2020.  Production was projected to fall by 6.3% to about 780.1 million ounces.  The big drop in silver output is largely a function of mine shutdowns due to coronavirus, but mine output was already trending down before the pandemic. Global mine production fell by 1.3% in 2019.

When you look at all the dynamics, the future looks bright for silver. As Peter Schiff emphasized in his podcast, silver is a good quality investments. Silver is cheap. Silver stocks are a bargain.