As we detailed earlier in the year for our Premium subs, if this turning point in the Chinese credit impulse is confirmed by the upcoming data, expect a dispersion between inflation-sensitive assets in 2021.

At the time, we pointed out a critical estimated timeline of the peak Y/Y performance for each of the assets analyzed after China’s credit impulse turned down. 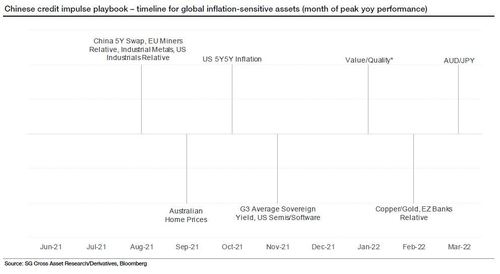 Fast forward til today, and that timeline appears to be starting to come true as alarm bells continue to ring with multiple banks pointing out what we said more than a month earlier. A peaking credit impulse may result in slower global growth and slumping industrial base metal prices.

Regular readers should know by now that under the current Chinese regime of debt-fueled growth – one of the most precise indicators of future economic growth is the credit impulse.

JPMorgan’s Mislav Matejka explains this week in a note to clients that China’s credit impulse is in the process of “peaking.” The change in the growth rate of aggregate credit as a percentage of gross domestic product in the country has a tremendous impact on the global economy’s future. Saxo Bank once said the credit impulse leads the global economy by 9 to 12 months. 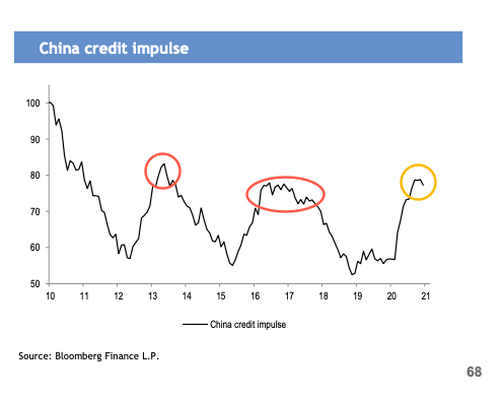 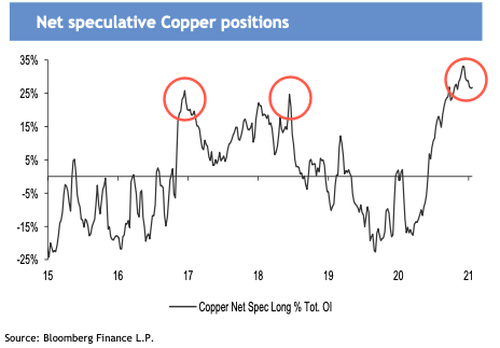 Focusing on copper, which is a critical contributor to the global economy, and prices rise and fall with China’s demand. The chart below shows that China’s peaking credit impulse tends to drag down copper bullish speculative positioning in the base metal, eventually leading to price declines. 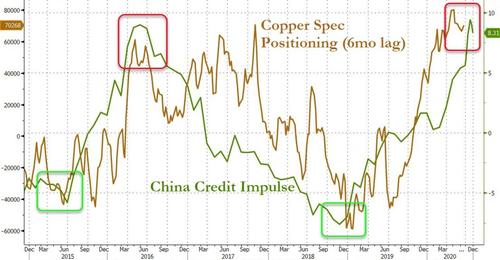 A further move higher in copper prices could depend on China continuing to expand credit or if Washington passes a massive stimulus bill. Though upside in copper could be fairly limited considering the credit situation in China.

If copper prices turn south, other base metals may follow with the threat of persistent oversupplied conditions as the global economy slows. Already, the Bloomberg Industrial Metals index weekly appears to be reversing after a sustained up-move since global central banks injected trillions of dollars into capital markets when the pandemic began in early 2020.

If you need any more confirmation that China could be headed into a slowdown, the always-well-managed services sector activity on Tuesday night printed at its slowest pace in nine months in January.

Again, as we’ve told our readers in the past, all that matters is the Chinese credit impulse.

Previous post: [ Washington vote goes for Cheney, but will it in Wyoming? ]
Next post: [ 'Domestic Terror' Is A Government Without Constraints ]