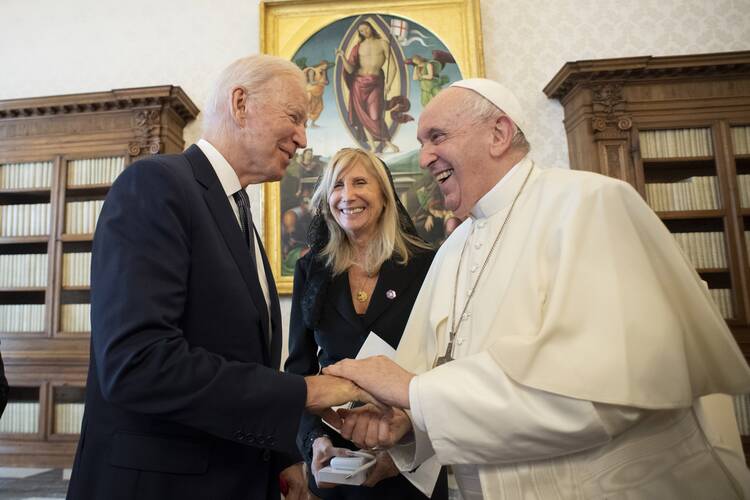 Pope Francis and President Joe Biden talked together in private for 75 minutes, an unusually long time by Vatican standards, a sign that the two leaders had a more in-depth discussion than observers had expected.

Francis warmly welcomed Mr. Biden, the second Catholic president of the United States, when he arrived at the papal library just before 12:10 p.m. Rome time. He then invited the president into the library, and the two leaders sat facing each other across the table in the library where Pope Francis has conversed with many of the world’s leaders over the past eight years, including Mr. Biden’s two predecessors, Donald J. Trump, on May 24, 2017, for 30 minutes, and Barack Obama on March 27, 2014, for 52 minutes.

On the table there was a crucifix, a clock, a note pad and a bell, which the pope rings to signal the end of the private audience and to invite the president’s delegation to enter the room.

Pope Francis and President Joe Biden talked together in private for 75 minutes, an unusually long time by Vatican standards.

Before today’s encounter, much was written regarding the push by some, though not all, U.S. bishops to deny the Eucharist to pro-choice politicians, including the president, and some speculated that the pope might raise the issue with Mr. Biden. A senior Vatican source who asked not to be identified, however, told America on the eve of the visit that Pope Francis had expressed his position clearly on this whole subject on the plane returning from Bratislava on Sept. 15 and did not see the need to say more.

Indeed, it was clear to officials and media in Rome that Mr. Biden came to the Vatican not as a penitent to confess to the pope but as the president of the United States of America to discuss questions of immense global importance with the leader of the world’s 1.3 billion Catholics, of whom he is a great admirer.

A senior Vatican official, who also wished to remain anonymous, told America that Francis was happy that Mr. Biden had decided to come to visit him on the eve of the G20 summit of world leaders in Rome and of the important COP26 conference in Glasgow, where the president will go on Nov. 1.

This morning, before meeting Mr. Biden (and President Moon Jae-in of South Korea), Francis, in a message on BBC Radio 4 this morning, emphasized the great political responsibility of governments to make serious commitments at COP26 to combat climate change and save humanity from climate-provoked disasters.

Joe Biden came to the Vatican not as a penitent to confess to the pope but as the president of the United States.

President Biden was accompanied by his wife, Jill, and a delegation of 10 other people that included Secretary of State Antony Blinken, National Security Advisor Jake Sullivan and the Charges d’affaires of the United States Embassy to the Holy See, Patrick Connell, as the new ambassador has yet to be confirmed by the Senate.

After their private conversation, following protocol, the pope and the president went to the back of the library and stood under a painting of the resurrection of Christ by the 15th-century Renaissance Italian painter Perugino. There the president presented each member of his delegation to the pope, starting with his wife.

A White House official told correspondents in Washington: “The engagement between the two was very warm when the delegation arrived in the room. There was laughter and clear rapport between President Biden and Pope Francis.”

A Vatican source who was present at the exchange of gifts but was not authorized to speak, told America: “The atmosphere was very friendly and relaxed. You could see that the pope and the president know each other well and enjoyed being together.”

“The atmosphere was very friendly and relaxed. You could see that the pope and the president know each other well and enjoyed being together.”

The very friendly atmosphere was evident from the videos released by the Vatican after the visit. They showed the two men joking with each other, like old friends, but at one stage President Biden said, “You are the most significant man for peace that I have ever met.” He also gave the pope a coin that had a connection to his late son, Beau.

Next, the two leaders went to a table in the center of the library where lay the gifts they would give each other. Pope Francis gave the president several gifts, including a painting of “The Pilgrim” on ceramic tile; the volumes of papal documents, including his encylicals and other major texts and this year’s message for peace, personally signed by the Holy Father. He also gifted him with the Document on Human Fraternity, signed in Abu Dhabi with the Grand Imam of Al Azhar, and the volume known as Statio Orbis, which documents through texts and photos Pope Francis’ talk and prayer in St. Peter’s Square on March 27, 2020, at the height of the pandemic.

President Biden gifted the pope with a handwoven chasuble made in 1930 from the Jesuit-run Holy Trinity Church in Washington, where Mr. Biden occasionally attends Mass.

At one stage President Biden said, “You are the most significant man for peace that I have ever met.”

After that exchange of gifts, the pope gave a gift to Dr. Jill Biden and each member of the presidential delegation, and the members of the delegation then left.

Pope Francis then accompanied President Biden to the door of the library, and they bade farewell to each other at 1:40 p.m. This means the length of the entire audience was 90 minutes.

After the audience with the pope, President Biden, accompanied by Mr. Blinken, was escorted to the Secretariat of State for a nearly hour-long meeting with Cardinal Pietro Parolin, the secretary of state, and Archbishop Paul Gallagher, the secretary for relations with states. He had previously met both senior officials in the United States in 2015 and in the Vatican.

During the course of the cordial discussions, the Parties focused on the joint commitment to the protection and care of the planet, the healthcare situation and the fight against the Covid-19 pandemic, as well as the theme of refugees and assistance to migrants.” It added that “ reference was also made to the protection of human rights, including freedom of religion and conscience.” It concluded: “ the talks enabled an exchange of views on some matters regarding the current international situation, also in the context of the imminent G20 summit in Rome, and on the promotion of peace in the world through political negotiation.

President Biden drove up the Via della Conciliazione, leading to St. Peter’s Square, around 11:50 a.m., amid intense security on the ground and helicopters overhead, in a motorcade of 85 vehicles, that recalled the power and prestige of imperial Rome in an earlier era. Mr. Biden was seated in one of the two identical armored cars, known as “the Beast,” surrounded by police escorts.

The cortege entered on the left-hand side of St. Peter’s Square, then went through the Arch of the Bells at the side of St. Peter’s Basilica, on to the St. Damaso courtyard. On his arrival, a platoon of Swiss Guards stood to attention in his honor as he stepped out of the car and was greeted with “welcome” by the Regent of the papal household, Monsignor Leonardo Sapienza. “It’s good to be back,” Mr. Biden responded.

The monsignor then presented him to the seven gentlemen of the papal household, before escorting him to the lift that took him to the second loggia (floor) of the apostolic palace.

On arrival there, he was escorted by Swiss Guards and other gentlemen of the papal household, through the 15th-century corridors and halls decorated by Raphael and other Italian artists, to the small throne room in front of the papal library where he was welcomed by Pope Francis. He arrived almost 10 minutes late for the papal audience due to the fact that President Moon of South Korea, who had an earlier 25-minute private audience with the pope and senior Vatican officials, had yet to leave the Vatican.