Pope Francis on the war in Ukraine: ‘Let the guns be silenced.’ 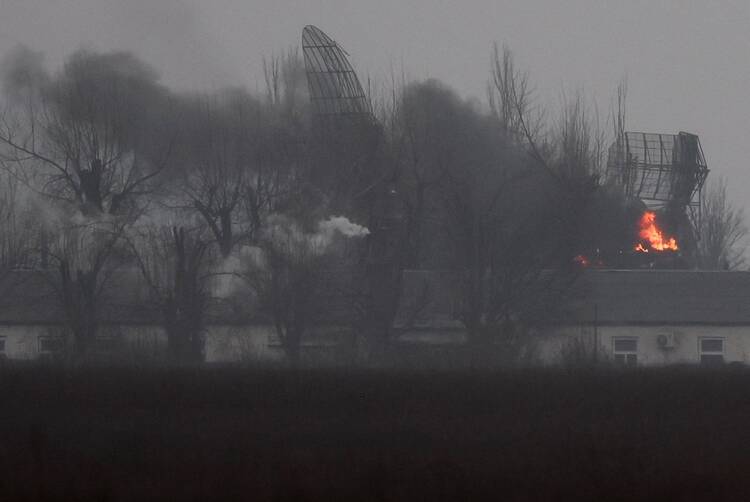 Pope Francis appealed again today, Feb. 27, for an end to the war in Ukraine, for “the silencing of the guns” and the opening of humanitarian corridors to those fleeing the war. “God is with those who work for peace, not with those who use violence,” he said.

The pope’s words were directed to hundreds of pilgrims from many countries, including several waving the blue and yellow flag of Ukraine, who were gathered in St. Peter’s Square. After commenting on the Gospel of the day and reciting the Angelus prayer with them, he spoke.

“I invite everyone to make March 2, Ash Wednesday, a day of prayer and of fasting for peace in Ukraine,” he said, repeating his appeal of last week. He called on people to make it “a day to be close to the suffering of the people of the Ukraine, a day to feel that we are all brothers and sisters and to implore God for the end of the war.”

“The one who makes war forgets humanity,” Pope Francis said.

“The one who makes war forgets humanity,” Pope Francis said. “He doesn’t look at the concrete life of people, but he puts before this all the partisan interests of power. He entrusts himself to the diabolical and perverse logic of arms, which is farthest from the will of God, and he distances himself from the ordinary people who want peace.”

The pope also mentioned the innocent victims of the conflict in Ukraine. “I am thinking of the old people, of those who at this hour seek refuge, of the mothers fleeing with their children,” he said. “They are brothers and sisters for whom it is urgent to open humanitarian corridors, and to give them welcome.” Poland has given refuge to some 150,000 Ukrainians, while Romania, Moldova and Slovakia had also welcomed many refugees.

Pope Francis: “I invite everyone to make March 2, Ash Wednesday, a day of prayer and of fasting for peace in Ukraine.”

Pope Francis said that while our “heart is torn for what is happening in Ukraine, let us not forget what is happening also in other parts of the world—in Yemen, in Syria, in Ethiopia.” He called again for an end to the fighting in Ukraine and these countries: “I repeat, let the guns be silenced.” He concluded his Sunday message with a greeting in Ukrainian, saying “Slava Isusu Khrystu,” meaning “Praise to Jesus Christ.”

In related news, the Greek Catholic archbishop of Ukraine, Sviatoslav Shevchuk, released a public letter yesterday. “On this Sunday we will celebrate the presence among us, the presence here in Ukraine, of the Risen Christ. But on this Sunday, the residents of Kyiv will not be able to go to church because of the government mandated curfew and everyone should stay at home because of the threat to their lives,” he said.

“We believe that, just as morning comes after night, just as after death comes resurrection, after this horrible war there will be victory for Ukraine, which this new day relentlessly and steadily brings closer.”