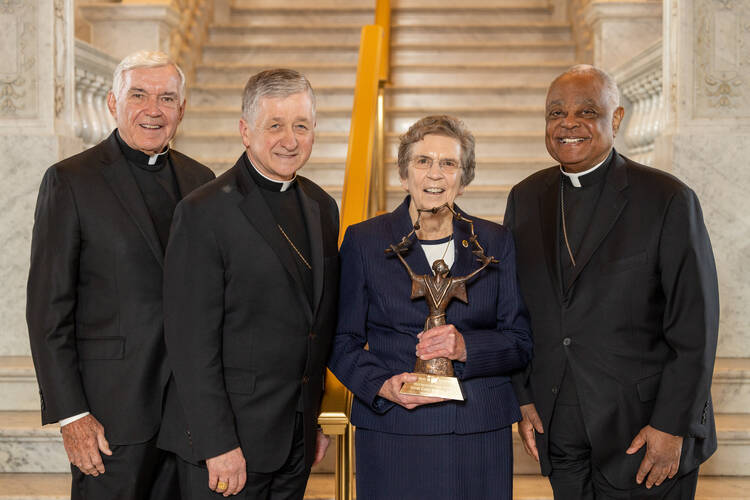 Pope Francis offered his support to a fixture of Catholic medicine who helped reshape the health care landscape in the United States.

Carol Keehan, D.C., the former head of the Catholic Health Association who was credited with helping pass the Affordable Care Act in 2010, was recognized with the Spirit of Francis Award from Catholic Extension, a Chicago-based nonprofit organization that assists ministries in poor dioceses.

Cardinal Pietro Parolin, the Vatican’s secretary of state, relayed a message from Pope Francis that was read by Archbishop Christoph Pierre, the Vatican’s nuncio to the United States, at an awards banquet on May 25 at the Library of Congress.

Carol Keehan, D.C., the former head of the Catholic Health Association, was recognized with the Spirit of Francis Award from Catholic Extension.

“His Holiness willingly associates himself with this recognition of her many years of dedicated leadership in continuing the healing ministry of Jesus Christ through the provision of quality health care for all, especially those most in need,” the message read, referring to Sister Keehan. “He appreciates as well her generous service to the Holy See and her fidelity to the charism of Saint Vincent de Paul, carrying out the apostolate of charity in ‘the consciousness that we are responsible for the fragility of others as we strive to build a common future’ (“Fratelli Tutti,” 115).”

It continued, “To Sister Carol, and to all who gathered for this happy occasion, the Holy Father cordially sends his blessing as a pledge of peace and joy in the Lord.”

“Sister Carol stands in a long line of consecrated religious women who have led the way in providing quality health care that leaves no one behind,” said Cardinal Cupich, who serves as the chancellor of Catholic Extension. “To this day, she continues to show great leadership, advising the Holy See on health care issues and, most recently, cooperating with Pope Francis’ initiatives to educate the world about Covid-19 vaccination.”

“Sister Carol stands in a long line of consecrated religious women who have led the way in providing quality health care that leaves no one behind,” Cardinal Cupich said.

Sister Keehan entered the contentious debate over the Affordable Care Act at pivotal time, lending Catholic support to a bill that had been criticized by U.S. bishops.

In the run-up to the bill’s passage in 2010, Catholic bishops, while supportive of expanding access to health care, had come out against the bill because of concerns that it would expand access to abortion. Sister Keehan reviewed the legislation and said she did not share those concerns.

At the time, The Washington Post called Sister Keehan’s sign-off of the legislation “a critical endorsement,” and later, then-President Barack Obama credited her with helping provide the necessary support to help pass the bill.

“We would not have gotten the Affordable Care Act done if it weren’t for her,” Mr. Obama said at a Catholic Health Association gathering in 2015.

In a 2019 interview with America, Sister Keehan said that as a result of her advocacy for the Affordable Care Act, some of her speeches were canceled and the Vatican received letters from people asking that she be exiled from her religious order. But she also said she did not have “any regrets” over her support for the law, which eventually would expand health care access to more than 30 million Americans.

After beginning her medical career as an emergency medicine nurse in 1964, Sister Keehan made the jump to hospital administration in 1969. In 2005, she took the helm of the Catholic Health Association and made expanding access to health care her top priority. She retired 14 years later. In 2021, she was appointed coordinator of the Public Health Task Force of the Vatican Covid-19 Commission, charged with promoting global vaccine equity and ensuring that Catholics understood that the vaccines were safe and morally licit.