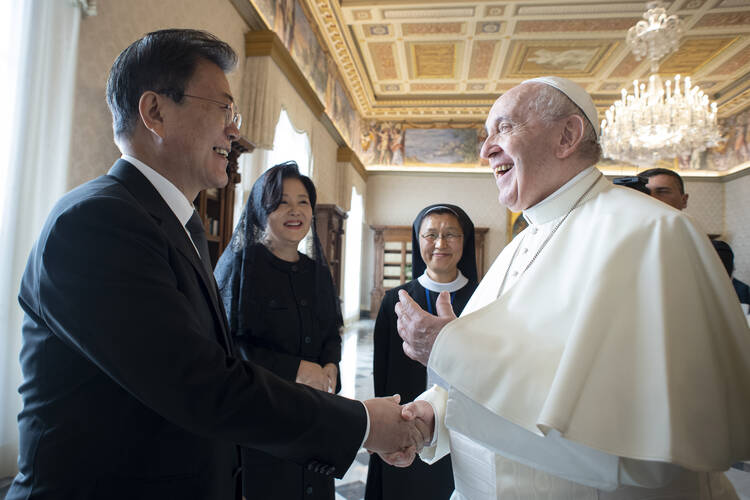 VATICAN CITY (AP) — South Korean President Moon Jae-in gave Pope Francis a statue of a cross made with barbed wire from the demilitarized zone separating the Koreas and told him Friday that a papal visit to the North would help create “momentum for peace” on the peninsula, officials said.

Moon, a Catholic, called on Francis before the start of the Group of 20 summit in Rome.

The Vatican, which didn’t allow independent media in the audience, said the talks touched on the role of the Catholic Church in promoting dialogue and said “hopes were shared that joint effort and good will may favor peace and development in the Korean Peninsula, supported by solidarity and by fraternity.”

Ahead of the visit, South Korean presidential officials said they expected Moon and Francis would discuss a possible papal visit to the officially atheist North, since Francis had previously expressed a desire to visit if it becomes possible. The Vatican made no mention of a possible trip in its statement Friday and none is currently believed to be under consideration.

Moon first floated the idea of a papal visit to the North in 2018 when he revealed that North Korean leader Kim Jong Un had said during a summit between the Korean leaders that the pope would be “enthusiastically” welcomed.

Kim then was actively engaging in diplomacy with Seoul and the Trump administration in an effort to leverage his nuclear programs for an easing of U.S.-led economic sanctions. But the diplomacy derailed and the North also cut off cooperation with South Korea while expressing frustration over the Moon government’s inability to wrest concessions on its behalf from Washington.

Park said Francis told Moon that he would “gladly visit” the North if he receives an official invitation, so that he could help the Korean people and contribute to peace.

Moon told the pope on Friday that if he does get an opportunity to visit North Korea, it would “create a momentum for peace in the Korean Peninsula” and that “South Koreans have huge expectations (for a papal visit to the North),” said Moon spokesman Park Kyung-mee.

Park said Francis told Moon that he would “gladly visit” the North if he receives an official invitation, so that he could help the Korean people and contribute to peace. He described the people of the two Koreas as “brothers who share the same language.”

During the exchange of gifts, Francis gave Moon a medallion replicating Bernini’s original plan for St. Peter’s Square. The design envisages the two main colonnades of the Vatican piazza embracing humanity in the church. He also gave him copies of some of his main texts, including one outlining his vision for greater human fraternity.

Moon’s statue of a cross was made with barbed wire from the DMZ. An accompanying note, written in Spanish, said his hope was that the spikes and iron used to make the barbed wire could be used instead as a symbol of peace.

“I pray devotedly that this cross sprouts deep roots and that peace may flourish,” the note said.