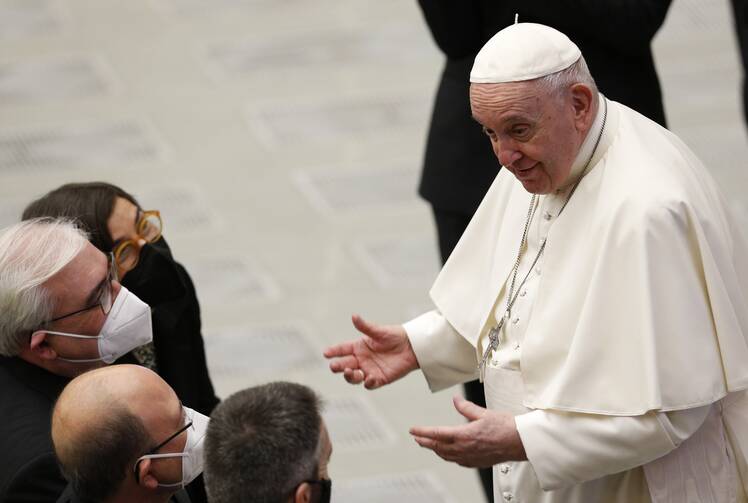 Below is the text of Pope Francis’ weekly Wednesday audience, delivered on Jan. 12, 2022.

To receive these remarks and more in your inbox every week, sign up for America’s daily newsletter.

The evangelists Matthew and Mark refer to Joseph as a “carpenter” or “joiner.” We heard earlier that the people of Nazareth, hearing Jesus speak, asked themselves: “Is not this the carpenter’s son?” (13:55; cf. Mk 6:3). Jesus practiced his father’s trade.

The Greek term tekton, used to specify Joseph’s work, has been translated in various ways. The Latin Fathers of the Church rendered it as “carpenter.” But let us bear in mind that in the Palestine of Jesus’ time, wood was used not only to make ploughs and various pieces of furniture, but also to build houses, which had wooden frames and terraced roofs made of beams connected with branches and earth.

Therefore, “carpenter” or “joiner” was a generic qualification, indicating both woodworkers and craftsmen engaged in activities related to construction. It was quite a hard job, having to work with heavy materials such as wood, stone, and iron. From an economic point of view, it did not ensure great earnings, as can be deduced from the fact that Mary and Joseph, when they presented Jesus in the Temple, offered only a couple of turtledoves or pigeons (cf. Lk 2:24), as the Law prescribed for the poor (cf. Lv 12:8).

Jesus’ neighbors were scandalized by him because he was the son of the carpenter, but he spoke like a doctor of the law.

Thus, the young Jesus learnt this trade from his father. Therefore, when as an adult he began to preach, his astonished neighbors asked: “But where did this man get this wisdom and these mighty works?” (Mt 13:54), and were scandalized by him (cf. v. 57), because he was the son of the carpenter, but he spoke like a doctor of the law, and they were scandalized by this.

This biographical fact about Joseph and Jesus makes me think of all the workers in the world, especially those who do gruelling work in mines and certain factories; those who are exploited through undocumented work; the victims of labor: we have seen a lot of this in Italy recently; the children who are forced to work and those who rummage among the trash in search of something useful to trade…

[Let us think] of the victims of work, who suffer from work accidents. Of the children who are forced to work: this is terrible! A child at the age of play, who should be playing, forced to work like an adult! Children forced to work. And of those—poor people!—who rummage in the dumps to look for something useful to trade: they go to the dumps… All these are our brothers and sisters, who earn their living this way: they don’t give them dignity! Let us think about this. And this is happening today, in the world, this is happening today.

But I think too of those who are out of work. How many people go knocking on the doors of factories, of businesses [asking] “Is there anything to do?”—“No, there’s nothing, there’s nothing. [I think] of those who feel their dignity wounded because they cannot find this work. They return home: “And? Have you found something?”—“No, nothing…. I went to Caritas and I brought bread.”

What gives dignity is not bringing bread home. You can get it from Caritas—no, this doesn’t give you dignity. What gives you dignity is earning bread—and if we don’t give our people, our men and women, the ability to earn bread, that is a social injustice in that place, in that nation, in that continent. The leaders must give everyone the possibility of earning bread, because this ability to earn gives them dignity. It is an unction of dignity, work. And this is important.

It is good to think about the fact that Jesus himself worked and had learned this craft from St Joseph. Today, we should ask ourselves what we can do to recover the value of work.

Many young people, many fathers and mothers experience the ordeal of not having a job that allows them to live tranquilly. They live day to day. And how often the search for work becomes so desperate that it drives them to the point of losing all hope and the desire to live. In these times of pandemic, many people have lost their jobs—we know this—and some, crushed by an unbearable burden, reached the point of taking their own lives. I would like to remember each of them and their families today. Let us take a moment of silence, remembering these men, these women, who are desperate because they cannot find work.

Not enough consideration is given to the fact that work is an essential component of human life, and even of the path of sanctification. Work is not only a means of earning a living: it is also a place where we express ourselves, feel useful, and learn the great lesson of concreteness, which helps keep the spiritual life from becoming spiritualism. Unfortunately, however, labor is often a hostage to social injustice and, rather than being a means of humanization, it becomes an existential periphery.

I often ask myself: With what spirit do we do our daily work? How do we deal with fatigue? Do we see our activity as linked only to our own destiny or also to the destiny of others? In fact, work is a way of expressing our personality, which is relational by its nature. And, too, work is a way to express our creativity: each one of us works in their own way, with their own style: the same work but with different styles.

It is good to think about the fact that Jesus himself worked and had learned this craft from St Joseph. Today, we should ask ourselves what we can do to recover the value of work; and what contribution we can make, as the Church, so that work can be redeemed from the logic of mere profit and can be experienced as a fundamental right and duty of the person, which expresses and increases his or her dignity.

Dear brothers and sisters, for all of this I would like to recite with you today the prayer that St. Paul VI lifted up to St. Joseph on 1 May 1969:

O St. Joseph,
Patron of the Church!
you, who side by side with the Word made flesh,
worked each day to earn your bread,
drawing from Him the strength to live and to toil;
you who experienced the anxiety for the morrow,
the bitterness of poverty, the uncertainty of work:
you who today give the shining example,
humble in the eyes of men
but most exalted in the sight of God:
protect workers in their hard daily lives,
defending them from discouragement,
from negative revolt,
and from pleasure loving temptations;
and keep peace in the world,
that peace which alone can ensure the development of peoples.