No wonder, then, as the billionaire VC said at the time, “the Chinese Communist Party hates crypto and loves AI.” 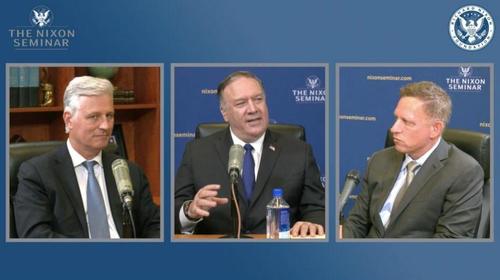 Some have suggested that the appearance with Pompeo could have implications for the 2024 presidential race. The former secretary of state is widely seen as a possible candidate for the Republican nomination – and Thiel has signaled a willingness to back figures closely aligned with Trump.

But, aside from his comments regard Apple as “probably the one [tech company] that’s structurally a real problem” for U.S. interests, adding that “Apple is the one that has real synergies with China;” Thiel caught the attention of the crypto crowd as he appeared to urge urged the U.S. government to consider tighter regulations… specifically against China.

“From China’s point of view, they don’t like us having this reserve currency as it gives us lots of leverage… like over oil supply chains…

They don’t want the Reminbi to become the reserve currency because then they’d have to open up their capital account [this losing some of the all-important centralized control they cherish].

The euro could perhaps be seen as a potential Chinese weapon against the dollar… though the last decade hasn’t worked out that way… but China may have liked to see two reserve currencies and leveraged the euro.”

And then Thiel shifted his focus specifically to crypto…

“I do wonder whether at this point, Bitcoin should also be thought [of] in part as a Chinese financial weapon against the U.S.,” Thiel said during the event.

“It threatens fiat money, but it especially threatens the U.S. dollar.”. 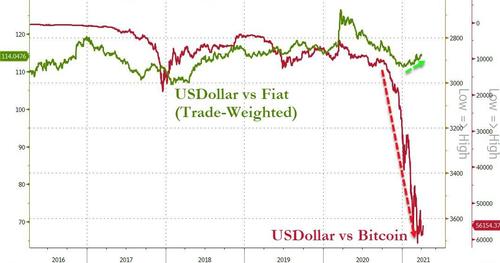 While the yuan has been strengthening against its fiat peers for much of the last year, it has been dramatically weakening against bitcoin. 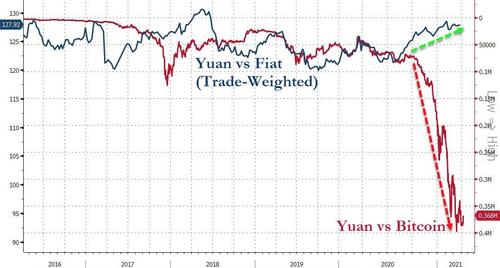 “[If] China’s long Bitcoin, perhaps from a geopolitical perspective, the U.S. should be asking some tougher questions about exactly how that works.”

The thoughtful VC also commented on China’s CBDC plans, agreeing with our previous comments that it has nothing to do with bitcoin, or any cryptocurrency:

“…that’s not a real cryptocurrency, that’s just some sort of totalitarian measuring device.”

“Even though I’m a pro-crypto, pro-Bitcoin maximalist person, I do wonder whether if at this point Bitcoin should also be thought of in part as a Chinese financial weapon against the U.S.” says @Paypal co-founder Peter Thiel.

While some have suggested this appears to be Thiel flip-flopping on bitcoin, it could perhaps been interpreted as him merely stating the fact that crypto is seen generally as a threat to the hegemonic dollar (as insurance against the constant money-printing of the central bank) and if China – in its own battle against the unipolar order – wants the USDollar to appear to be weakening, it makes sense for them to be buying (or mining… illegally) bitcoin.

Hence, Thiel is more likely suggesting that, in his self-proclaimed “pro-crypto, pro-Bitcoin maximalist” manner, that the US should be buying bitcoin… to counter China’s attempts to ‘corner’ it.