Less than a week ago, we reported that the US COVID-19 vaccination scheme had fallen dramatically in recent weeks, likely a factor of a drop in new cases combined with an easing of facemask requirements.

And as President Biden scrambles to hit his July 4 target to vaccinate more than 70% of adults, a goal that’s looking increasingly remote every day, the NYT reported Thursday morning that there’s one region of the country that’s seeing vaccination demand fall more sharply than the others: And that’s the deep south. It shouldn’t come as a surprise. But what’s even more surprising according to the NYT’s latest reporting, is that public health departments across the region have tried everything they can think of – public health meetings, church clinics, going door-to-door. In the spirit of offering raffle prizes to those who get vaccinated, one state even offered winners of one a spin around a NASCAR track. 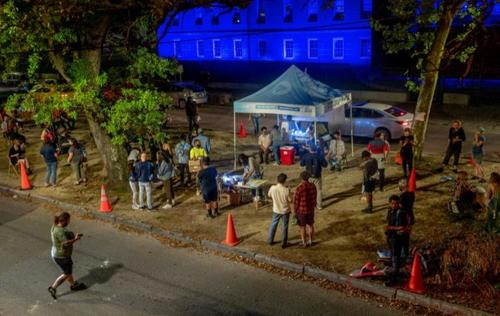 But doctors who spoke to the NYT from states like Alabama, Louisiana and Mississippi (all states where fewer than half of adults have gotten even their first jab), warned that the sense of victory that’s settled in across the region is premature.

“A lot of people have the sense, ‘Oh, dodged that bullet,’” said Dr. Jeanne Marrazzo, the director of the Division of Infectious Diseases at the University of Alabama at Birmingham. She added, “I don’t think people appreciate that if we let up on the vaccine efforts, we could be right back where we started.”

As of last night, the South is home to 8 of the 10 states with the lowest vaccination rates. Several theories have emerged to try and explain this: hesitancy from conservative white people, concerns among some Black residents, longstanding challenges when it comes to health care access and transportation.

“It’s kind of a complex brew, and we’re teasing apart the individual pieces,” said Dr. W. Mark Horne, president of the Mississippi State Medical Association. He added: “There’s no magic bullet. There’s no perfect solution. There’s no pixie dust we can sprinkle on it.”

Currently in the US, everyone over the age of 12 is eligible to be vaccinated. Daily, vaccinations are down to about 1.1MM doses from a peak of more than 3.3MM doses a day in mid-April. Unless the US see a sharp uptick in jabs, Biden is on track to miss his July 4 goal of getting 70% of Americans vaccinated by July 4.

In some parts of the south, it’s unclear if that threshold will ever be attainable.

“I certainly don’t expect us to get to 70 percent by Fourth of July. I don’t know that we’ll get to 70 percent in Alabama,” said Dr. Karen Landers, Alabama’s assistant state health officer. “We just have a certain group of people, of all walks of life, that just aren’t going to get vaccinated.”

Unfortunately for countries that are desperate for more jabs, vaccines have a short shelf-life, with a three-month shelf life at refrigeration temperatures, millions of doses of the Johnson & Johnson vaccine are set to expire nationwide this month, prompting some governors to urgently plead that health providers use them soon. 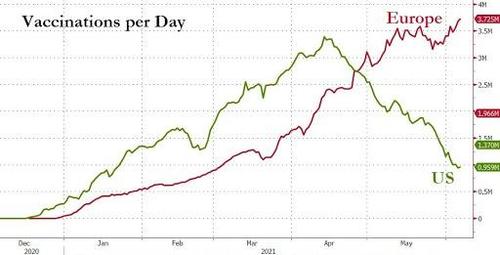 In Alabama, Nick Saban, the championship-winning football coach, urged fans to get vaccinated so they could attend games safely this fa

Across much of the South, vaccine skepticism is pervasive. In Jackson, Miss., Felix Bell Sr., a warehouse supervisor, expressed concern about how quickly the vaccines were developed. He did not plan to get a shot. “At first they said it’s going to take several years,” said Mr. Bell, who said he had previously recovered from Covid-19. “And then all of a sudden, it was ‘Boom.’” He added, “They’ve got to get more information about what happens down the line.” 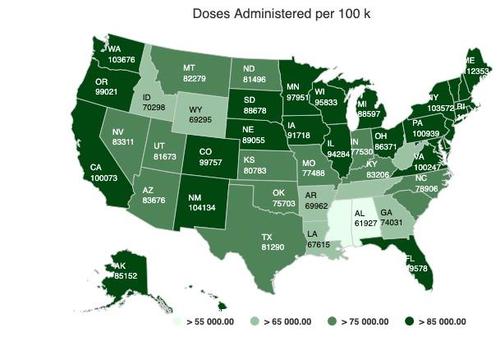 The big worry right now is that mutant COVID-19 strain’s like the fearsome “Delta” mutant first discovered in India could spark another vaccine-resistant strain to take hold and essentially restart thee outbreak.

“If we don’t get our numbers up, we could be where we were last year, sheltering in place,” said William Parker, the president of the Birmingham City Council, who has proposed spending millions of dollars on vaccine incentives and who answered questions about vaccines on Monday as part of an online forum for residents.

Doctors have warned that the low vaccination numbers could make the South vulnerable to another wave of infections. Some polls have suggested that reluctance to accept the vaccine is linked to political affiliation, as Republican voters are more personally resistant to the jab than Democrats. But the big “unknown” right now is whether all this worrying might be for naught. Because as disagreements among doctors have shown, some believe that  antibodies produced by those who have already been infected (which have been found to last longer than earlier studies had suggested) might mean the US has already passed its “herd immunity” threshold.

But there’s no way to know for certain until the fall arrives.