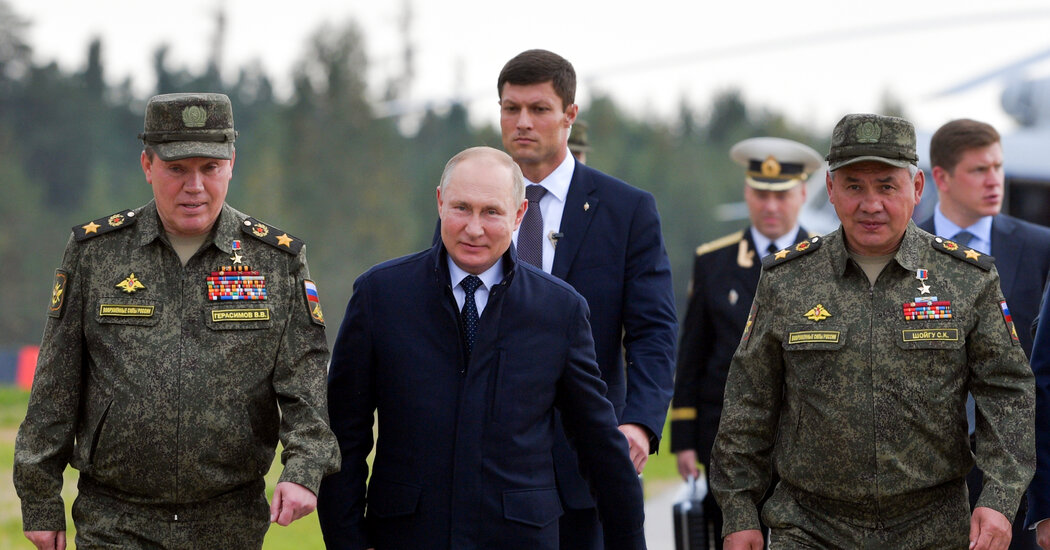 President Vladimir V. Putin of Russia said he is isolating because several members of his inner circle tested positive for the coronavirus.

Mr. Putin canceled a planned trip to Tajikistan this week for a Central Asian security summit, the Kremlin said, describing a phone call that Mr. Putin had on Tuesday with Emomali Rahmon, the Tajik president.

“Vladimir Putin said that in connection with identified cases of the coronavirus in his environment, he must observe self-isolation for a certain period of time,” the statement said.

In a televised videoconference later Tuesday with senior officials, Mr. Putin said that one of the people who tested positive was a vaccinated staff member with whom he had recently interacted “very closely in the course of the whole day.” Mr. Putin has said he was vaccinated with the two-dose regimen of Russia’s Sputnik V vaccine, but he has continued to be extraordinarily careful in his public appearances, often requiring people he meets to quarantine beforehand.

“We’ll see how Sputnik V works in practice,” Mr. Putin said in the videoconference, adding that his antibody levels were still high.

Mr. Putin’s spokesman, Dmitri S. Peskov, said Mr. Putin would continue working while in isolation and expressed confidence that the vaccine would protect him from a serious case of the disease.

“We all know that the vaccine is guaranteed to protect you from serious consequences, but cases of illness are still possible,” Mr. Peskov said. “The president is absolutely healthy.”

Mr. Putin had been scheduled to attend a summit on Friday of the Shanghai Cooperation Organization, a regional security group. He will still participate in the meeting, but will do so by video link, the Kremlin said. Prime Minister Narendra Modi of India and President Xi Jinping of China are also scheduled to address the gathering remotely.

Mr. Putin’s isolation — the first time he has taken such a step because of potential exposure — underscores the pandemic’s continuing severity in Russia. Widespread vaccine hesitancy and lax mask-wearing have allowed the Delta variant of the coronavirus to spread largely unchecked.

Russia’s officially reported mortality from the coronavirus has been essentially flat, at just below 800 deaths per day, since July. The remarkable stability of the daily toll has led some analysts to question its veracity, though officials insist it is accurate.

Mr. Putin had several in-person events on Monday as officials were deliberating over whether he should go into quarantine, including a meeting with President Bashar al-Assad of Syria, a close Russian ally. That took place “before the decision was made about the necessity of self-isolation,” Mr. Peskov said, adding, “No one’s health was put in danger.”

Both Mr. al-Assad and his wife, Asma, contracted the virus but quickly recovered, officials said in March. There was no word from Syria on Tuesday that Mr. al-Assad would need to self-isolate after the meeting with Mr. Putin.

“We are working together on solving the most important problem that all of humanity faces today — the fight against the coronavirus infection,” Mr. Putin told Mr. al-Assad, according to a transcript published by the Kremlin on Tuesday. “I hope that, with our joint efforts, we will be able to help the Syrian people get back on their feet in every sense of the word.”

Russia intervened in support of Mr. al-Assad in Syria’s civil war in 2015 and turned the tide of the conflict in his favor, amid heavy criticism from human-rights groups of a brutal bombing campaign. Russia delivered 250,000 doses of its one-shot Sputnik Light vaccine to Syria in July.