Below is my column in the Hill on how the second Trump impeachment could become a trial over reckless rhetoric in America. The House managers may be playing into that very danger by selecting some managers who have been criticized in the past for their own over-heated political rhetoric.

As managers were replaying the comments of former President Donald Trump from prior years to show how his words fueled divisions, critics were pointing to similar statements from the managers themselves.

Rep. Jamie Raskin, D-Md., the leading impeachment manager, was chided for using “fight like hell” in a 2019 interview with The Atlantic – the very words replayed repeatedly from Trump. He also used that phrase repeatedly in prior years to ramp up his supporters in fighting for Democratic control of Congress.

Speaker Nancy Pelosi blundered by appointing managers like Eric Swalwell who is notorious for his inflammatory rhetoric, in a trial where such rhetoric would be the focus of the managers.  Swalwell’s comments not only include disturbing legal claims, but highly personal and offensive remarks like mocking threats against Susan Collins, R-Maine. Swalwell declared “Boo hoo hoo. You’re a senator who police will protect. A sexual assault victim can’t sleep at home tonight because of threats. Where are you sleeping? She’s on her own while you and your @SenateGOP colleagues try to rush her through a hearing.”  Pelosi picked not only a member who has viciously attacked Republicans but one of the Republicans most needed by the House in this trial. If this trial boils down to irresponsible political rhetoric, the public could find it difficult to distinguish between the accused, the “prosecutors” and the “jury.”

That is the problem with a strategy that seems focused not on proving incitement of an insurrection but some ill-defined form of political negligence. 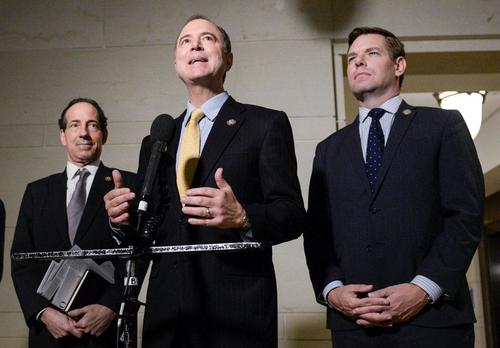 Here is the column:

Little more than one year since Donald Trump’s first impeachment, the Senate is poised to pass judgment on him again. There is, however, one notable difference in the trial that starts today: In 2020, Trump’s conduct with Ukraine turned on his words alone; this time, a vote to convict could be seen as implicating a host of others in the use of similarly reckless rhetoric — including some of his Senate “jurors.”

The search for moral clarity will be lost if Americans cannot distinguish between the behavior of the accused and that of his jury. With polls showing only half of the country favoring conviction, this trial could end up as an indictment of both sides for fueling our divisions. Impeachments were intended to be used in the clearest possible cases to secure two-thirds votes for conviction. But Congress could wind up looking like an unimpeached co-conspirator — not in the riot, but in our ongoing political discord.

The Senate will focus on words from Trump’s Jan. 6 speech that could be viewed as criminal incitement or as political exhortation. The House will ask the Senate to convict on how Trump’s words were interpreted, even if those did not actually call for violence. House impeachment managers plan to replay video of Trump urging his supporters to “fight like hell, and if you don’t fight like hell, you’re not going to have a country anymore.” He also told them: “We will not be intimidated into accepting the hoaxes and the lies that we’ve been forced to believe over the past several weeks.” The problem? Those words could be equally consistent with calling for a protest, not violence, as many groups routinely do at state and federal capitals.

While the House frames these words in the most menacing light, it barely mentions other words that reinforced a nonviolent meaning. For example, Trump told his supporters that “everyone here will soon be marching over to the Capitol building to peacefully and patriotically make your voices heard.” He said the reason for the march was that “we are going to cheer on our brave senators and congressmen and women.” As for those opposing any electoral vote challenge, Trump said “we’re probably not going to be cheering so much for some of them. Because you’ll never take back our country with weakness.”

Cheering on your congressional allies is an act of free speech, not insurrection. Yet, the House impeached Trump for inciting an actual insurrection or rebellion. Its impeachment article does not charge him with recklessly causing a riot or threatening Congress; it alleges an effort to overthrow our government. That is the deepest possible hole to dig in the House and to fill in the Senate.

The Supreme Court has long rejected fluid standards in criminalizing speech. Indeed, a case based on this speech likely would fail in federal court. In Brandenburg v. Ohio, the Supreme Court refused to allow the criminalization of speech that actually calls for “the use of force or of law violation” unless it is imminent.

The Trump team is likely to play back similar language used by Democrats in both houses to “fight” for the country and to “retake” Congress. During Trump’s 2017 inauguration, Democrats denounced his legitimacy as riots broke out in Washington involving violent groups. Rep. Maxine Waters (D-Calif.) later called on people to confront Republicans in public; Rep. Ayanna Pressley (D-Mass.) insisted during 2020’s violent protests that “there needs to be unrest in the streets.” Then-Sen. Kamala Harris (D-Calif.) said “protesters should not let up” even as many protests turned violent or deadly. House Speaker Nancy Pelosi (D-Calif.) has condemned fellow members as effectively traitors and the “enemy within.” She was criticized last year for stating, in the midst of violent protests, that “I just don’t know why there aren’t uprisings all over the country. Maybe there will be.”

All of these Democrats insist they meant peaceful acts — and I believe them. But that is the point: Rioters sought to burn federal buildings or occupy state capitals and, in some cases, seized police stations, sections of cities, even a city hall. Democrats’ words did not cause that violence on the left. Yet, this impeachment trial invites the same or similar words to be interpreted subjectively, based on whether you believe or approve of the speaker.

Reckless rhetoric reflects our age of rage. Senate Majority Leader Chuck Schumer (D-N.Y.)  stood in front of the Supreme Court and, citing two justices by name, declared menacingly: “Hey, Gorsuch. Hey, Kavanaugh — you’ve unleashed a whirlwind. And you’re going to pay the price.” Rep. Cori Bush (D-Mo.) seemed to defend the recent violent takeover of a St. Louis prison by tweeting the words of Martin Luther King that “a riot is the language of the unheard.” Nor is this limited to Washington: Michigan Gov. Gretchen Whitmer (D) defended state Rep. Cynthia Johnson (D) who called for “soldiers” to “make [Trump supporters] pay” for criticizing and harassing her.

Fired FBI director James Comey has been given to reckless rhetoric, too. He recently said: “The Republican Party needs to be burned down … It’s just not a healthy political organization.” Likewise, Washington Post columnist Jennifer Rubin declared that “We have to collectively, in essence, burn down the Republican Party. We have to level them because if there are survivors, if there are people who weather this storm, they will do it again.” Since the Republican National Committee was targeted with a pipe bomb on Jan. 6, would that constitute incitement to arson or violence? Not under Brandenburg.

Such rhetoric even extends to academics, who historically abhor violence. One professor recently called for more Trump supporters to be killed. Rhode Island Professor Erik Loomis, who writes for the site Lawyers, Guns, and Money, said he saw “nothing wrong” with the killing of a conservative protester — a view defended by other academics.

While they are not the president, the fact is that politicians, pundits and professors regularly engage in more direct, violent speech than what Trump said on Jan. 6. While certainly not responsible for the disgraceful riot in the Capitol, many of them remain accessories to stoking our politics of hate and division. Many of their statements have been defended as appropriate calls to action to combat great social injustice. The question is whether we want shifting majorities to decide whether a statement is inciteful or insightful — a dangerously fluid standard.