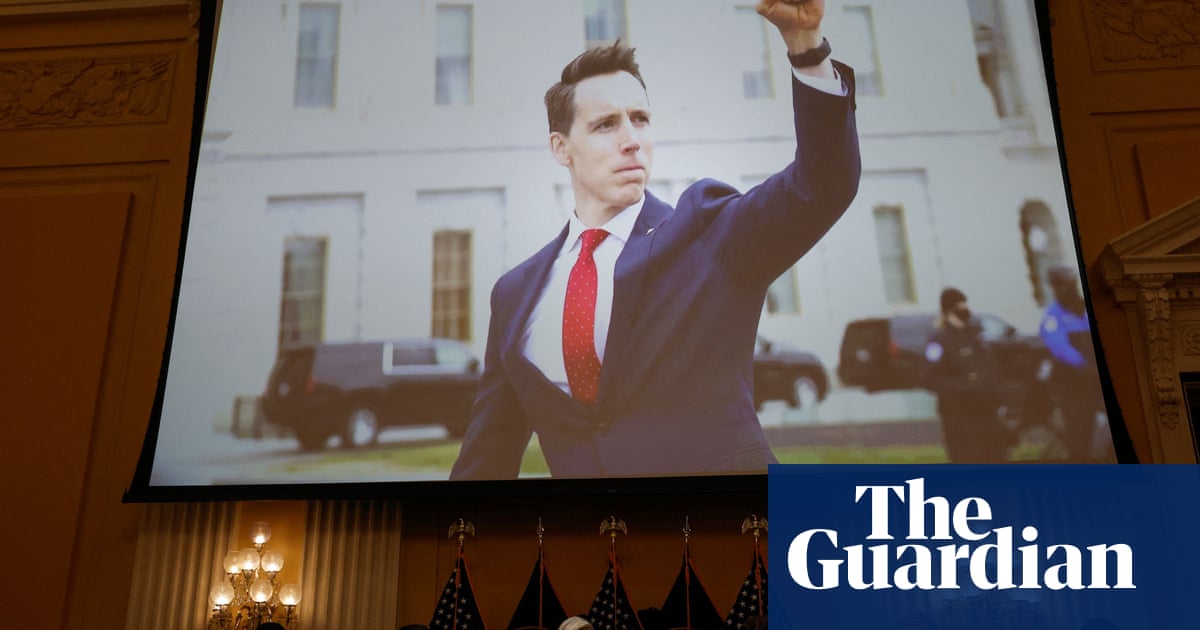 The House January 6 committee on Thursday played Capitol security footage which showed the Missouri Republican senator Josh Hawley, who famously raised a fist to protesters outside, running for his safety once those protesters breached the building. It prompted a flurry of online memes ridiculing Hawley fleeing from the very people he had earlier encouraged.

She said: “Senator Josh Hawley also had to flee.

“Earlier that afternoon before the joint session [of Congress] started, he walked along the east front of the Capitol.

“As you can see in this photo, he raised his fist in solidarity with protesters already amassing at the security gates.”

The committee showed the famous image of the senator raising his fist, which was taken by a photographer for E&E News, subsequently bought by Politico.

“Later that day, Senator Hawley fled after those protesters he helped to rile up stormed the Capitol. See for yourself.”

The committee then played video of Hawley trotting across a corridor and hurrying down a staircase next to an escalator.

In the room, the clips were greeted with laughter.

Online, some took a similarly lighthearted view, one user scoring the footage of Hawley running to a soundtracks including Stayin’ Alive by the BeeGees, Born to Run by Bruce Springsteen and the Benny Hill theme.

Hawley had been the first Republican senator to say he would object to results in key states won by Joe Biden, in the certification process Trump ultimately sent a mob to delay or destroy.

Hawley has denied trying to incite violence with his raised fist, telling the Huffington Post: “This was not me encouraging rioters … At the time that we were out there, folks were gathered peacefully to protest, and they have a right to do that. They do not have a right to assault cops.”

Luria said: “We spoke with a Capitol police officer who was out there at the time. She told us that Senator Josh Hawley’s gesture riled up the crowd and it bothered her greatly because he was doing it in a safe space, protected by the officers and the barriers.”

The senator has also used the image for fundraising purposes.

The Lincoln Project, a group of anti-Trump conservatives, said: “Hawley’s legacy will forever be fleeing from the same mob he helped incite.”

After the mob had been cleared from the Capitol – a riot now linked to nine deaths and nearly 900 criminal charges – Hawley was one of 147 Republicans who went through with their objections to results in key states.