A New York Grand Jury has voted not to indict several Rochester police officers involved in the death of 41-year-old Daniel Prude last March, according to New York Attorney General Letitia James, who launched an investigation into the fatal encounter.

In a viral video released nearly six months after his death, Prude could be seen sitting handcuffed and naked in the street, wearing a “spit hood” which had been placed around his head after he reportedly smashed store windows and ranted about having COVID-19. The officers could be seen laughing and smiling as Prude made delusional comments, at times shouting incoherently in what a lieutenant later described in police documents as Prude having “acted in a fashion consistent with an individual in some form of mental distress.”

Rochester police arrested Prude in the early hours of March 23 while responding to a 911 call made by his brother, who was concerned about Prude’s safety during an apparent mental health crisis.

Prude had been released from Rochester’s Strong Memorial Hospital earlier that evening after expressing suicidal thoughts and had left his brother’s house wearing long johns and a tank top in below-freezing temperatures. Police found him naked and acting irrationally, allegedly smashing storefront windows and ranting about having the coronavirus. –NPR

According to police reports, Prude lost consciousness and stopped breathing – only to die a week later after being taken off life support.

Prude’s family, which obtained the bodycam footage through a Freedom of Information Act (FOIA) request, filed a federal lawsuit alleging the Rochester police department attempted to cover up the true nature of his death.

According to the Chicago Tribune, officers Troy Taladay, Paul Ricotta, Francisco Santiago, Andrew Specksgoor, Josiah Harris and Mark Vaughn, along with Sgt. Michael Magri were cleared of wrongdoing by the Grand Jury, after their attorneys argued that the officers were strictly following their training that night, and had employed a restraining technique called “segmenting.”

They claim that Prude’s use of PCP was the “root cause” of his death, while the county medical examiner cited the drug as a “contributing factor.”

Following Prude’s death, Democratic Mayor Lovely Warren fired police chief La’Ron Singletary, the latter of whom claims that Warren told him to lie to support her claim that she didn’t know about Prude’s death until months later, and that he was fired for refusing to do so. 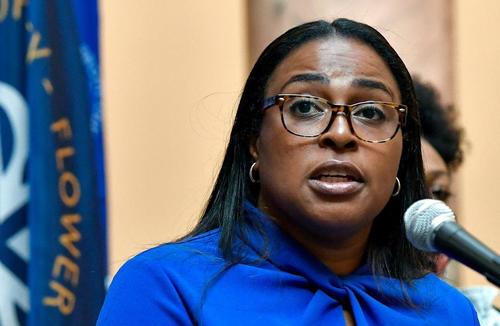 Warren announced a run for a third term in January and pleaded not guilty in October to an unrelated indictment alleging she broke campaign finance rules and committed fraud. The city’s public integrity office found no ethical lapses by the mayor in a narrow review of Prude’s death.

The city halted its investigation into Prude’s death when James’ office began its own investigation in April. Under New York law, deaths of unarmed people in police custody are typically turned over to the attorney general’s office, rather than handled by local officials. –Chicago Tribune

Cover photo via the Daily Mail.