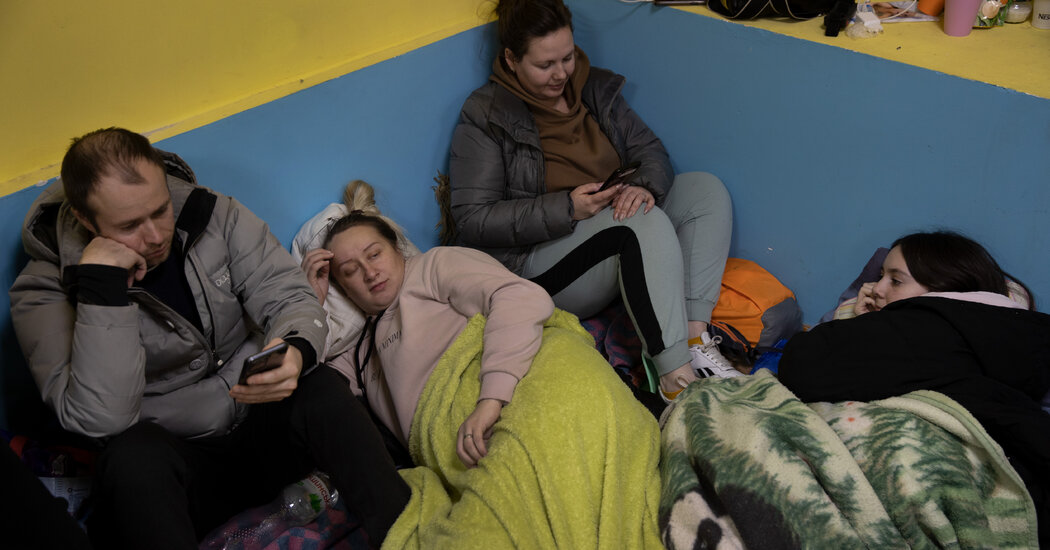 MYKOLAIV, Ukraine — A day after Ukrainian forces pushed Russian troops back beyond the city limits of Mykolaiv, the Russians on Monday unleashed a ferocious artillery attack on the southern Ukrainian city, hitting residential neighborhoods with rockets and sending streams of people fleeing for safety.

At about 5 a.m., the city awoke to a barrage that lit up the dark sky. Residents took shelter in basements and truckloads of Ukrainian troops rushed to the east of the city, where the fighting appeared to be heaviest. At one point during the day, a fierce tank battle erupted between Russian forces and Ukrainian troops defending Mykolaiv’s airport, with blasts that could be heard throughout the city.

The initial, early morning attack killed at least eight Ukrainian soldiers, when a Kalibr cruise missile struck the barracks where they were sleeping, Vitaliy Kim, the Mykolaiv region governor said in a message on Facebook. Another 19 were wounded and 8 were still unaccounted for.

“They attacked our city dishonorably, cynically, while people were sleeping,” Mr. Kim said.

By evening though, the guns had died down, and Ukrainian officials declared that their forces had once again repelled the Russian onslaught.

“They are retreating and running away,” Mr. Kim said, though this could not be independently verified. “Nothing remains of their tanks, as far as I understand.”

Mr. Kim said a group of about 20 Russian soldiers had fled into the forest, and he urged residents to call the police should they encounter them.

Mykolaiv, a port city of about 500,000 residents on the Southern Buh River near the Black Sea, is a critical objective of Russian forces. The city is on the way to Odessa, on the Black Sea and home to Ukraine’s largest port. Odessa, a city of more than 1 million people, is the country’s primary outlet to the global economy.

The Russian military’s failure thus far to take the city fits in with its faltering efforts elsewhere in the country. Though many times larger than the Ukrainian military and with more advanced weapons and air superiority, Russian forces have become bogged down just about everywhere in the country, struggling with logistical problems, apparent poor troop morale and tactical errors that Ukrainian troops have taken advantage of.

Unable to make major military gains with precision attacks, Russian seem to have resorted to a campaign of terror in Ukrainian cities and villages.

Though the most intense shelling of the day in Mykolaiv occurred at frontline positions, as elsewhere, rockets rained down on civilian neighborhoods.

Several rockets landed in a neighborhood of dense apartment blocks in the far east of the city, blowing out windows and sending shrapnel through walls and home appliances. There were no immediate reports of injuries, but residents were shaken, often invoking the name of Russia’s president, Vladimir V. Putin, with a torrent of profanity.

“Tell Putin that he is killing peaceful people,” Olga Kololyova, 48, said through sobs as she stood in the kitchen of her broken home. The glass had been blown out of her front window and her front door had been destroyed. She said she hid in her bathroom as the rockets rained down.

“He thinks that we are to submit to him?” she said. “I want him to go through what I went through this morning.”

Viktor Voroboi had just returned to his bed after an early-morning cigarette on his balcony when a rocket hit outside, blowing out the balcony glass and showering him with debris. A day before, he had moved his mother into his apartment after her own neighborhood was bombed in an earlier attack. Neither of them suffered injuries on Monday.

“I was lucky, it means an angel is protecting me,” he said, his voice still shaking.

Residents of an apartment block sheltered in a basement that normally serves as a gym; the sound of artillery fire shook the walls. Margarita Andreyeva accused Russia of tarnishing what she described as a sacred victory over the Nazis in World War II, in which Ukrainians and Russians fought together.

“And now Germany is giving us weapons to defend ourselves from the Russians,” she said. “This is absurd. What would our grandfathers think?”

By noon on Monday, the soundtrack of incoming and outgoing artillery fire around the city had reached high volume.

Reached on WhatsApp at the front line on Monday morning, Colonel Sviatoslav Stetsenko from the Ukrainian Army’s 59th Brigade said Ukrainian forces were holding back Russian forces with their artillery.

“The best way to preserve yourself is to destroy the enemy who attacks you,” he said.