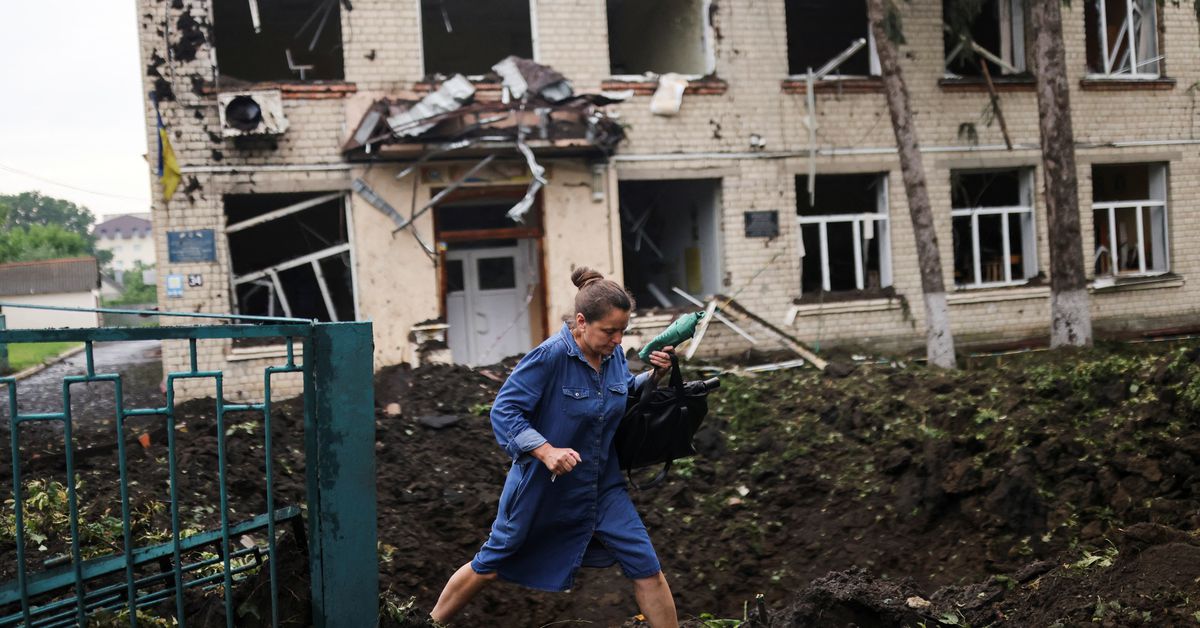 KYIV, July 16 (Reuters) – Russia said on Saturday its forces would step up military operations in Ukraine in “all operational areas” as Moscow’s rockets and missiles pounded cities in strikes that Kyiv says have killed dozens in recent days.

“Three people lost their lives, why? What for? Because Putin went mad?” said Raisa Shapoval, 83, a distraught resident sitting in the ruins of her home.

To the south, more than 50 Russian Grad rockets pounded the city of Nikopol, on the Dnipro River, killing two people who were found in the rubble, the region’s governor Valentyn Reznichenko said.

Ukraine says at least 40 people have been killed in such attacks on urban areas in the last three days. Russia says it has been hitting military targets.

Russian Defence Minister Sergei Shoigu ordered military units to intensify their operations to prevent Ukrainian strikes on eastern Ukraine and other areas held by Russia, where he said Kyiv could hit civilian infrastructure or residents.

“Clearly, preparations are now under way for the next stage of the offensive,” said Vadym Skibitskyi, a spokesman for Ukrainian military intelligence, adding that there was Russian shelling along the entire front line and active use of attack helicopters.

Shoigu, a close ally of Russian President Vladimir Putin, was shown in military fatigues at a command post on the defence ministry’s Zvezda TV channel being briefed on the war and awarding “Golden Star” medals for heroism to two generals.

His remarks appeared to be a direct response to what Kyiv says is a string of successful strikes carried out on 30 Russian logistics and ammunitions hubs using several multiple launch rocket systems recently supplied by the West.

On Saturday, the Ukrainian military said Russia appeared to be regrouping units for an offensive towards Sloviansk, a symbolically important city held by Ukraine in the Donetsk region.

While the focus of the war has moved to Ukraine’s eastern Donbas region, Russian forces have been striking cities elsewhere in the country with missiles and rockets in what has become an increasingly attritional conflict.

Moscow, which launched what it called its “special military operation” against Ukraine on Feb. 24, says it uses high-precision weapons to degrade Ukraine’s military infrastructure and protect its own security. It has repeatedly denied targeting civilians.

A teacher walks in front of a destroyed school following a military strike in Chuhuiv, about 6 km from frontline, amid Russia’s invasion of Ukraine, in Kharkiv region, Ukraine July 16, 2022. REUTERS/Nacho Doce

Kyiv and the West say the conflict is an unprovoked attempt to reconquer a country that broke free of Moscow’s rule with the break-up of the Soviet Union in 1991.

In one recent attack that stoked outrage from Ukraine and its Western allies, Kalibr cruise missiles hit an office building in Vinnytsia, a city of 370,000 people about 200 km (125 miles) southwest of Kyiv, on Thursday. read more

Kyiv said the strike killed at least 23 people and wounded dozens. Among the dead was a 4-year-old girl with Down’s Syndrome named Liza, found in the debris next to a pram. Images of her playing shortly before the attack quickly went viral.

Russia’s defence ministry has said the strike on Vinnytsia was directed at a building where top officials from Ukraine’s armed forces were meeting foreign arms suppliers. read more

Late on Friday, Russian missiles hit the city of Dnipro, about 120 km (75 miles) north of Nikopol, killing three people and wounding 15, Reznychenko, governor of the Dnipropetrovsk region that includes both cities, said on Telegram, adding that an industrial plant and a busy street next to it were hit.

“When the blast wave hit, there were few shards because all my windows were taped up,” a local woman who gave her name as Klavdia told Reuters.

“The people whose windows were not protected like this, there was a lot of blood, their injuries were horrible. I saw a small child all covered in blood. It was awful,” she said.

Russia said it had destroyed a factory in Dnipro making missile parts.

The war dominated a meeting of G20 finance ministers in Indonesia. U.S. Treasury Secretary Janet Yellen said differences over the conflict had prevented the finance chiefs and central bankers from issuing a formal communique but that they agreed on a need to address a worsening food security crisis. read more

“This is a challenging time because Russia is part of the G20 and doesn’t agree with the rest of us on how to characterize the war,” Yellen said.

Western countries have imposed tough sanctions on Russia and have accused it of war crimes in Ukraine, which Moscow denies. Other G20 nations, including China, India and South Africa, have been more muted in their response.

In one spillover from the conflict, a blockade restricting exports of Ukrainian grain has prompted warnings it could put millions in poorer countries at risk of starvation.

Despite the bloodshed, both Russia and Ukraine described progress towards an agreement to lift a blockade in recent talks. Turkey, which is mediating, has said a deal could be signed next week.