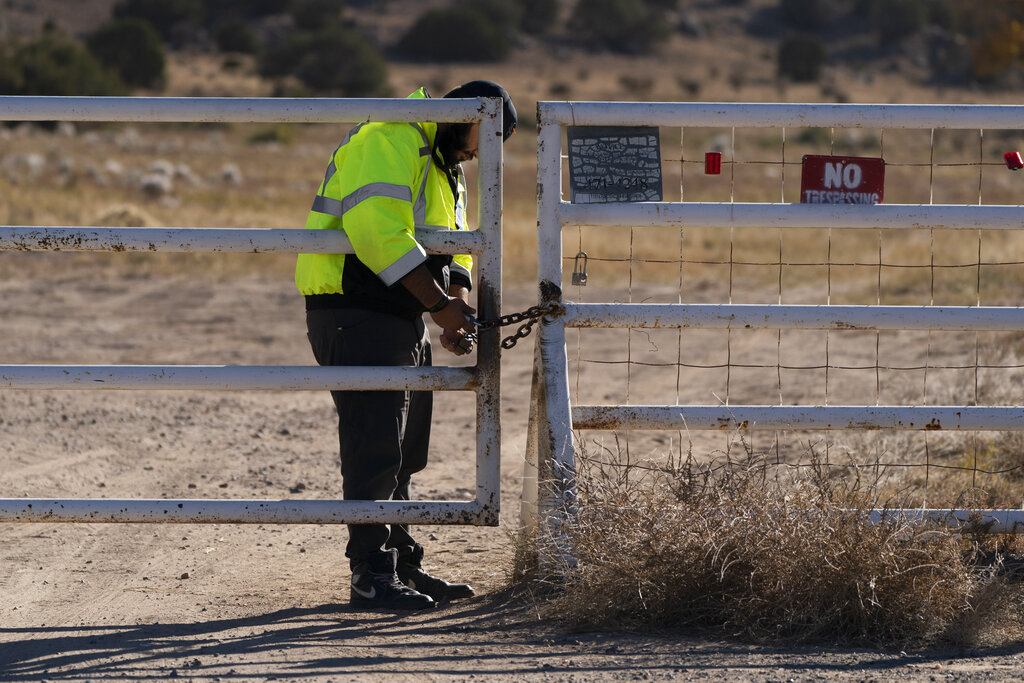 Lawyering up with a former Assistant U.S. Attorney after being called out in public by Santa Fe’s Sheriff, the Rust armorer at the center of the tragedy that saw cinematographer Halyna Hutchins fatally has spoken out for the first time.

Disputing tales of after-hours target practice with weapons used for the film, Rust armorer Hannah Gutierrez’ lawyers also confirmed that two weapons were accidentally discharged on the troubled set of Rust before the tragedy.

“Safety is Hannah’s number on priority on set,” said attorneys Jason Bowles and Robert Gorence in a statement released late Thursday night. “Ultimately this set would never have been compromised if live ammo were not introduced. Hannah has no idea where the live rounds came from.”

“Hannah still, to this day, has never had an accidental discharge,” her lawyers claim in their statement tonight. Pointing to a chaotic and disorganized Rust set that saw several members of the camera crew resign over safety and financial concerns shortly before the rehearsal in which Alec Baldwin discharged a pistol that caused Hutchins’ death and the injury of director Joel Souza, Gutierrez’s lawyers double down on the unsafe set. “The first one on this set was the prop master and the second one was a stunt man after Hannah informed him his gun was hot with blanks.”

No timeline is given by Gutierrez’s attorneys on when these discharges happened, but we know a lot about the shooting of Hutchins and director Souza.

Minutes before Hutchins was shot, Baldwin was told by First Assistant Director that the 1880s-style long Colt .45 revolver was a “cold gun” when the weapon was handed to the Rust star/producer on the afternoon of October 21. Despite that, Santa Fe County Sheriff Adan Mendoza told media on Wednesday that the fatality of Hutchins came from at least “one live round” that discharged during the rehearsal.

“We identified two other people that handled and or inspected the loaded gun prior to Baldwin firing the weapon,” Sheriff Mendoza noted on Wednesday. “These two individuals are armorer Hannah Reed-Gutierrez and Assistant Director David Halls. All three individuals have been cooperative in the investigation and have provided statements.”

While Halls admitted in an October 27 affidavit from the police that he didn’t properly check the gun in question that day, Gutierrez insists she had “checked the ‘dummies’ and made sure there were not ‘hot rounds’” in the gun.

With First Judicial District Attorney Mary Carmack-Altwies warning at this juncture of the investigation that “all options are on the table – no one has been ruled out,” both Halls and Gutierrez retained New Mexico criminal defense attorneys. Gutierrez’s legal team has begun planting her narrative of events, circumstances, and responsibilities on Rust.

“Hannah was hired on two positions on this film, which made it extremely difficult to focus on her job as an armorer,” Bowles and Gorence stated. “She fought for training days to maintain weapons and proper time to prepare for gunfire but ultimately was overruled by production and her department.”

They did not specify what Gutierrez’s second role was; it is believed to be assistant prop master. Industry veteran Neal W. Zoromski said earlier this week that he had turned down an offer to join Rust as prop master after he’d asked for two experienced crew members: an assistant prop master and an armorer but was told the movie could only afford one person handling all these duties.

The attorneys’ statement was first reported by MSNBC’s Yasmin Vossoughian. “The whole production set became unsafe due to various factors, including lack of safety meetings,” the lawyers added in pointing fingers at the producers of the low budget Western.

“Along with expressing Gutierrez’s “deepest and most sincere condolences to the family and friend of Halyna,” the awkwardly worded statement denied a reporter first raised last Saturday that Rust weapons were being used for target practice, after hours.

“Hannah and the prop master gained control over the guns and she never witnessed anyone shoot live rounds with these guns, nor would she permit that,” the lawyers stated. “They were locked up every night and at lunch and there’s no way a single one of them was unaccounted for or being shot by crew members.”

Rust was Gutierrez’ second film as an armorer.

Gutierrez is the 24-year old daughter of veteran film armorer Thell Reed. She debuted as armorer on the Nicolas Cage film The Old Way. Crew members on that Brett Donowho-directed movie have spoken to several media outlets about Gutierrez being lax on gun safety protocols.

The Santa Fe Sheriff’s office has said its investigation will take a while and that more search warrants are likely.

Leaning into that, Gutierrez’s attorneys say they “will have more to say soon. Hannah and her legal team will address more of these rumors and the whole incident in an upcoming statement next week.”

The producers have issued statements about their commitment to safety. With a bright young cinematographer dead, and the director of the film nursing a gunshot wound, and extraneous producers disavowing responsibility as possible criminal and civil suits draw near, the production’s claims about commitments to safety ring more than hollow – this was a tragedy that increasingly looks like it could have been prevented.

A New York Times report said the producers saved money by not securing a completion bond, but it is well known in the industry those are hard to come by because of Covid and the possibility that an outbreak could shut down sets for weeks. Completion bonds were routine pre-Covid, but numerous productions that found the costs prohibitively high have taken the risk of going without them. Clearly that comes with its own perils.