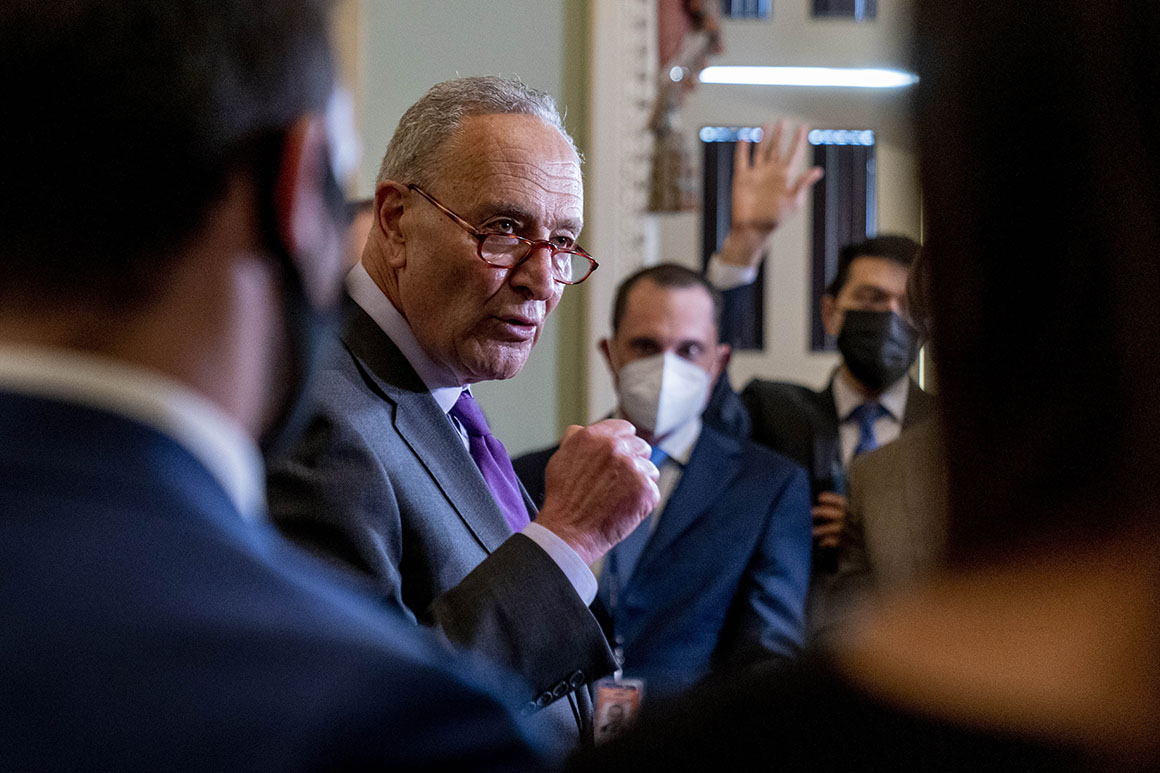 In other words, the meeting between Biden, Pelosi and Schumer couldn’t come at a better time. Both a credit default and a collapse of the Biden agenda are possible, particularly if rifts continue between House and Senate Democrats. There is little margin for error in either chamber. Pelosi can lose three votes in the House, and Schumer has no extra room to maneuver in a 50-50 Senate.

“In the abstract we all have been talking about how tough it is to work with these really thin margins,” said Rep. Dan Kildee (D-Mich.). “This is actually the result.”

Democratic senators are watching Pelosi’s House machinations on the bipartisan infrastructure bill with exasperation, worried the speaker’s planned break from the two-track process that coupled Biden’s jobs and families plan to a roads and bridges bill will provoke disaster. Schumer told his members that he had not been consulted about Pelosi’s plan to decouple the two and forge ahead with a solo vote on the bipartisan bill this week.

Across the Capitol, House Democrats are perplexed at Schumer’s tactics to raise the debt ceiling, concerned his insistence at challenging Republicans is a box canyon and that eventually he’ll have to go it alone through a reconciliation vehicle. Several fumed about voting a second time on a debt ceiling increase that stands little chance of winning Republican support— and could cost them politically next year.

“I do see there’s some daylight between them right now. I trust Nancy,” Rep. Juan Vargas (D-Calif.) said of the two leaders. “If you let Nancy run the whole place, things would get done.”

But Democrats who wrote the bipartisan infrastructure bill are agog that Pelosi’s progressive members might tank it or get it pulled from the floor.

“That’s a shame. That’s the best bill you got. It’s the most important thing we have,” said Sen. Joe Manchin (D-W.Va.), who added that a deal on the social spending package is “not possible” ahead of the vote.

After her meeting with Biden and Schumer, Pelosi indicated she was not changing her plans.

“The plan is to bring the bill to the floor,” she said. “One hour at a time.”

Democrats acknowledge the friction isn’t helpful at this critical moment. But they expressed confidence that it would be short-term and may ultimately be productive.

On Wednesday, several House Democrats threatened to rebel over a vote for a clean debt ceiling increase that’s certain to be blocked by Senate Republicans. Rep. Henry Cuellar (D-Texas) said one of the House moderates griped to him: “We’re doing Schumer’s thing. The debt ceiling should be on reconciliation. Why are we voting on this again? It’s pointless.”

Yet Schumer is eager to paint the GOP as the party of “default” and wants to lambaste them for risking the country’s credit worthiness. He also refuses to entertain using the complex budget reconciliation process to raise the debt ceiling without Republican votes, an idea Pelosi wouldn’t rule out this week. And Schumer sees House Democrats getting cold feet about the clash with Senate Minority Leader Mitch McConnell.

Meanwhile, Senate Democrats are livid at the suggestion from House members to fold and move on to raising the debt ceiling through reconciliation. Leaders are currently insisting it cannot be done before the Oct. 18 deadline.

“Totally disagree,” said Senate Majority Whip Dick Durbin (D-Ill.). “It is not realistic. We will never get it done by the October deadline, that’s for sure. And secondly, establishing the precedent of using reconciliation is outrageous. To think that this pro forma declaration of the debt of the United States has to go through this elaborate procedure every year? Shame on us.”

Despite the bad feelings in the House, the chamber passed a clean debt ceiling suspension Wednesday evening after Pelosi upbraided her members who were balking at the vote.

Now, Pelosi is under pressure not just from her own members but also from Democratic senators to proceed on a vote on infrastructure legislation that was painstakingly negotiated by Senate centrists. They say folding to progressive pressure and yanking the planned vote this week would be a catastrophe.

“I want to see it pass. I think it would be a mistake not to pass it,” said Sen. Jon Tester (D-Mont.). “I think it’s going to happen. But if that dies, and reconciliation dies? Man oh man.”

Not everyone lays the current conundrum at Pelosi’s feet. House Democrats say Schumer is to blame for multiple reasons. The infrastructure bill cleared the Senate with little input from the House, and now members in the lower chamber are irate at some of the provisions — particularly those that claim to address climate change.

In addition, the key to unlocking progressive support for infrastructure is securing public guarantees from Manchin and Sen. Kyrsten Sinema (D-Ariz.) on the bigger spending bill.

Schumer, those Democrats say, has failed to deliver those promises. And now the House has run out of time and must vote on the Senate-passed infrastructure bill as progressives root for its defeat.

“I hope to see our progressives in the House stand strong. They know the deal that we all agreed to months ago,” said Sen. Elizabeth Warren (D-Mass.).

Even if Pelosi and Schumer reconcile their immediate differences, there is another huge fight looming: what health care programs to fund in their social spending bill.

Pelosi has been advocating for programs that would shore up Obamacare, including an effort backed by House Majority Whip Jim Clyburn (D-S.C.) to expand Medicaid to more than 2 million people in mostly Republican states.

Clyburn railed on Democrats opposed to that effort during a private caucus meeting this week, saying there’s a “racial component” to the backlash among his colleagues for expanding Medicaid.

Schumer, meanwhile, has been backing Sen. Bernie Sanders’ (I-Vt.) effort to permanently expand Medicare to offer vision, hearing and dental benefits. The effort is costly and would siphon away critical dollars that Pelosi wants to use for Obamacare-era programs.

“This is legislation in the works. I mean, it’s never pretty,” said Rep. Ron Kind (D-Wis.). “It takes a little time to work these things out.”