Just when you thought the future couldn’t get much more dystopian, scientists have issued more stark warnings that COVID-19 is reducing fertility in men, and could contribute to depopulation of the planet. 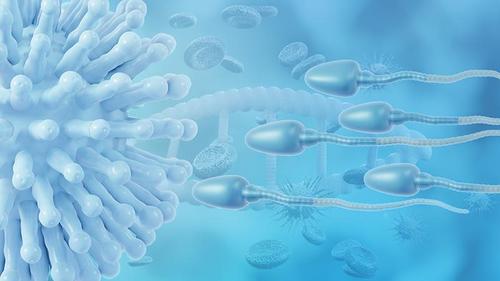 Scientists say that there is increasing evidence in patients of testicular damage and lower sperm counts and mobility, with initial studies revealing the presence of the virus in semen samples.

Researchers at the Justus-Liebig-University in Germany. along with scientists from Allameh Tabataba’i University in Iran have reported  significant inflammation markers in samples of testicular tissue from 84 Covid-19 patients.

They discovered that the inflammation and cellular stress were twice as severe in the Covid-19 positive group as in a control group.

Researchers also noted that sperm was three times slower in COVID patients, and sperm count in general was much lower.

The study found that sperm concentration was reduced by 516 per cent, mobility by 209 per cent and sperm cell shape was altered by 400 per cent.

The researchers further noted that this represents oligoasthenoteratozoospermia, one of the most common causes of subfertility in men.

“Although these effects tended to improve over time, they remained significantly and abnormally higher in the Covid-19 patients, and the magnitude of these changes were also related to disease severity,” Maleki further warned.

In addition, Researchers from the Huazhong University of Science and Technology in Wuhan (yes, that Wuhan) have issued a call for a long term study into the effects of the virus on male fertility.

“We propose that there is an urgent need to track male Covid-19 patients during their recovery,” microbiologist Yu Tian and reproductive biologist Li-quan Zhou noted.

Previous studies have pointed toward a correlation between the virus and reduced fertility.

Last year a Miami University study found that COVID-19 can invade tissues in the testicles and  impair sperm function.

In January a review of studies published in the journal Open Biology warned that COVID posses a “global threat to male fertility potential.”

Research conducted by Professor Dan Aderka of the Sheba Medical Centre in Tel Aviv, Israel, reported that the virus was present in 13 percent of sperm samples taken from screened COVID-19 patients. He also found a 50 percent reduction in sperm volume, concentration, and motility in patients with moderate symptoms 30 days post diagnosis.

Another study conducted last year by researchers in Shangqiu, China discovered the presence of the virus in sperm, raising concerns that it could be sexually transmitted.

The list of studies linking the virus to potential infertility is endless.

Global fertility rates were already decreasing before COVID at a “jaw dropping” rate, with one study published in The Lancet highlighting that the global fertility rate almost halved to 2.4 in 2017, and projections indicate that it will fall below 1.7 by 2100.

Other studies have noted that the “Total sperm count in North America, Europe, Australia and New Zealand dropped by up to 60% in the 38 years between 1973 and 2011” and more recent research shows the trend is continuing.

In addition, it is projected that the fall out of COVID will lead to a huge decline in the birth rate as people simply choose not to bring children into the world at this time.

Previous post: [ How Close Is The UK To 'Herd Immunity'? ]
Next post: [ US Deploys B-1 Bombers To Norway For First Time Amid Russia's Arctic Ambitions ]