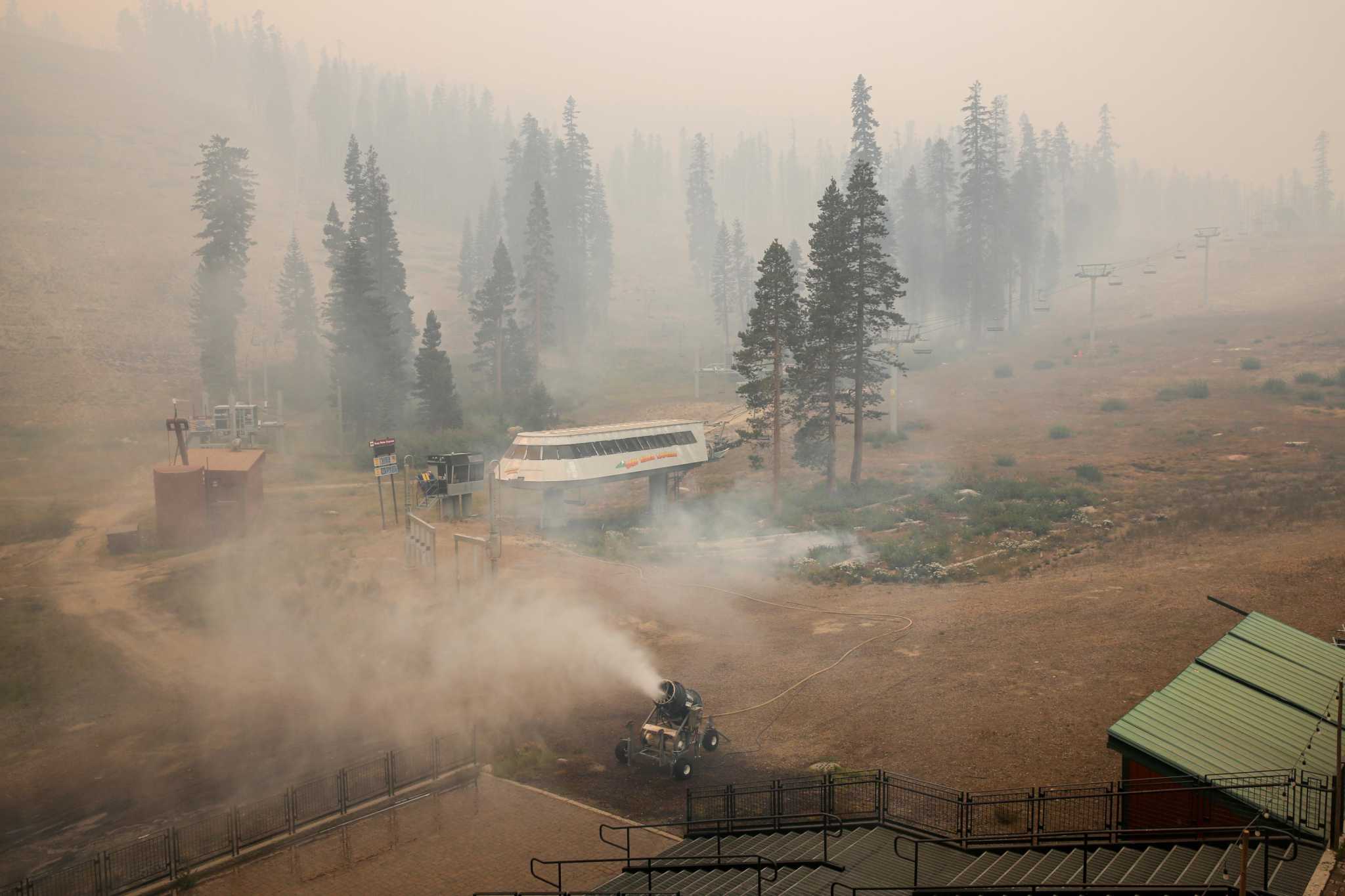 For the past two weeks, John Rice watched the Caldor Fire march up the mountains toward Sierra-at-Tahoe Resort, growing into an existential threat to the ski area he has managed for 29 years.

Late Sunday, Rice stood on the roof of his office at the resort’s base and watched as the blaze hit the property.

“It came in from the west side, almost a bullseye right towards us, this big wall of fire,” he said.

Driving toward South Lake Tahoe from the Bay Area, Sierra is the first resort skiers pass along Highway 50, in Twin Bridges. The 2,000-acre resort is known for its legendary tree runs and great instruction programs for beginner skiers and snowboarders from Sacramento and the Central Valley. It has been around for 75 years, produced Olympic gold medalists and withstood earthquakes.

In advance of the fire, Rice and another manager feverishly cut defensible space around buildings, taped up air ducts to block embers, drove heavy equipment into the resort’s parking lots to spare them from damage and repositioned the resort’s cannon-shaped water hydrants, typically used for snowmaking, to douse structures when the flames arrived.

Inside, they went office to office, boxing up important documents and collecting computer servers to move them offsite.

“Everything and anything we could do to mitigate losses,” Rice said.

They knew the fire was coming. It was just a question of what the damage would be.

At the same time, Rice kept a close eye on his home in nearby Christmas Valley, which came under an evacuation order Sunday. As a member of the Lake Valley Fire Protection District’s Board of Directors, he was allowed to cross the road barriers to travel to and from the resort.

The resort could have suffered catastrophic damage on Sunday and Monday, Rice said, if not for the early work he and his fellow manager did in the days prior — but also if not for the arrival of 12 men in four fire trucks who showed up unexpectedly a week earlier to lend a hand. They were a contract crew of mostly retired wildland firefighters sent by the resort’s insurer, AIG, to consult on mitigation and perform last-minute defense.

The men, some of them former Cal Fire firefighters, quickly got to work, scraping the landscape of dry materials, chainsawing away branches and drenching building exteriors with fire-retardant gel.

“I thought they’d be here for a day helping,” Rice said Monday afternoon, after the fire front had swept through. “No. They’re still there, right now.”

After Rice and his fellow manager were forced to evacuate on Monday afternoon, the crew texted him updates: This building is still standing; these wires didn’t melt. He’d heard about insurers sending private crews to ward fires away from upscale residences, but never about ones showing up at a ski resort.

“I think we’re the first test for this kind of disaster,” Rice said.

Sierra-at-Tahoe may not be out of danger yet, however. On Monday night, a camera on the mountain appeared to show fire burning again on the property.

While wildfire is not a new threat to the forests in which Tahoe’s 11 major ski areas operate, the frighteningly powerful incarnations of California’s more recent megafires have sent insurance premiums up and prompted resort operators to rethink fire preparedness. Most ski resorts operate on U.S. Forest Service property and are required to keep fire plans updated annually.

“There’s no question about it, that with the increase in wildfires, whatever fire plan a resort did have has been re-evaluated in the last few years,” said Michael Reitzell, president of the California Ski Industry Association. “Now it’s, ‘What can we do to make this as strong as possible?’”

The most immediate threat to Tahoe’s ski areas continues to be the Caldor Fire, which was 186,568 acres and 15% contained Monday night. It had moved farther south over the weekend toward Kirkwood Mountain Resort on Highway 88 south of Lake Tahoe. Half of the fire crew that helped out at Sierra-at-Tahoe peeled off on Saturday to assist in the Kirkwood area.

“Right now, the conversation really is about how these resorts can help each other,” Reitzell said. “I reached out to our resorts last night just to say, keep Sierra-at-Tahoe and Kirkwood in your thoughts. These people will do whatever’s needed to help each other out.”

On its ascent toward Sierra-at-Tahoe, the fire destroyed structures on both sides of Highway 50, leaving behind black and barren trees and chimneys surrounded by burned rubble. On Monday afternoon, small fires and smoldering logs were still burning at various points throughout the area between Phillips and Twin Bridges.

But the ski resort’s buildings, chairlifts and towers appeared all but unscathed, save for a maintenance building on the upper mountain that was burned in the blaze.

“If I didn’t get that crew, it’d be a different story,” Rice said.

Throughout the ordeal, other ski areas reached out to offer assistance: equipment storage, lodging for evacuated employees — anything Rice may have needed. The manager says that’s the kind of support that has kept ski resorts going for generations.

“The bottom line is, we’re a very resilient group of people,” Rice said. “We come together and help each other through the hard times. I’m confident we’ll meet this challenge.”

Whether Sierra-at-Tahoe would be ready for the anticipated season opening in November, Rice said he’d need to bring in specialists to evaluate the chairlifts and equipment after the fire passes. But he’s optimistic.

“If our season pass sales coming into this winter are any indication of what to expect, people want to come. I fully expect we’ll be serving them this winter. But the resort might look a little different.”