The Russian military’s future appears to be dominated by advanced hypersonic missile technology, stealth fighter jets, and perhaps in the next 15 years, combat suits for infantrymen that resemble the military gear worn by “Master Chief” in the Halo video games.

State-owned defense giant Rostec State Corporation released a press release describing how it has begun work on a new combat suit for the “soldiers of the future.” The effort will result in the new suit being deployed on the modern battlefields by 2035.

“The fourth-generation outfit is a principally new gear that demands looking into the future. It will unite the Russian military-defense complex’s latest achievements, new protection, and life-support systems, robotized equipment, and integrated information exchange systems. The outfit demands a big volume of research. We have begun the first stage to determine tactical and technical requirements,” Rostec Industrial Director Bekhan Ozdoev said.

Rostec has already supplied the Russian military with 300,000 second-generation Ratnik combat gear outfits. The company is currently working on third-generation Sotnik gear that could be released by the mid-point of the decade. 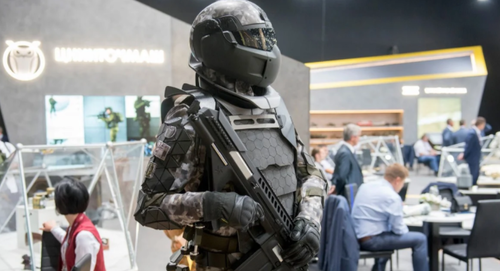 Rostec’s press release was vague regarding details about the fourth-generation gear. Ozdoev has said before that the new suit would be made with special armor that could withstand a .50 caliber shot. “The gear will not restrict movement and will allow you to take the extra weight necessary to perform special missions,” according to Ozdoev.

Russia is also developing an exoskeleton that has already been field-tested in Syria while the US Army is still playing catch up with an exoskeleton still in testing.

Previous post: [ Our Oligarchs' Crisis Of Confidence ]
Next post: [ H.R. 127: A New Bill In Congress Would Literally End Your 2nd Amendment Rights Permanently ]