LOS ANGELES — Officials in Southern California on Sunday raced to limit the damage done by an oil spill that has been blamed on a broken pipeline leading to an offshore platform.

An estimated 126,000 gallons of heavy crude leaked into the waters off Orange County starting late Friday or early Saturday, when boaters began reporting a sheen in the water, officials said. The pipeline and operations at three offshore platforms owned by Houston-based Amplify Energy Corp. were shut down Saturday night, CEO Martyn Willsher said. 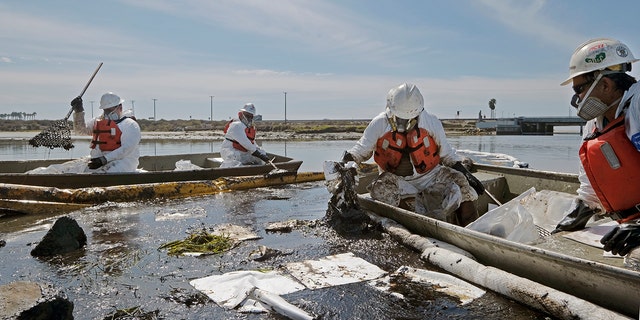 The Los Angeles Times reported that the Newport Beach Police Department, in Orange County, started to get calls of the mysterious smell of oil wafting in the air sometime on Friday. About a day later, officials spotted evidence of the spill.

The report said the pipeline in question is connected to a 41-year-old platform about eight miles off the coast named Elly. Huntington Beach — which was the site of the Pacific Airshow on Sunday — canceled its final day due to the conditions on the beach. Kim Carr, Huntington Beach mayor, told Fox 11 that the spill could pose a “potential ecologic disaster.”

“Officials are already responding to protect sea life. Dead fish and birds are already being reported on beaches and shorelines. I have serious concerns about the environmental impacts of the spill and applaud the workers who are doing their best to prevent the oil from hitting sensitive wetlands,” she wrote.

Beta Offshore, which is based in Long Beach, was blamed for the spill and is working with the Incident Management Team on repairs and cleanup efforts, a statement from Huntington Beach said.  The O.C. Register identified the company as a subsidiary of Amplify Energy.

Willsher said the pipeline is 80 to 100 feet below the surface was suctioned out so no more oil would spill as the location of the leak was being investigated. An after-hours email from Fox News was not immediately returned.

GET THE FOX NEWS APP

Some birds and fish were caught in the muck and died, Orange County Supervisor Katrina Foley said. But by early afternoon Saturday the U.S. Coast Guard said there so far was just one ruddy duck that was covered in oil and receiving veterinary care. “Other reports of oiled wildlife are being investigated,” the Coast Guard said in a statement.