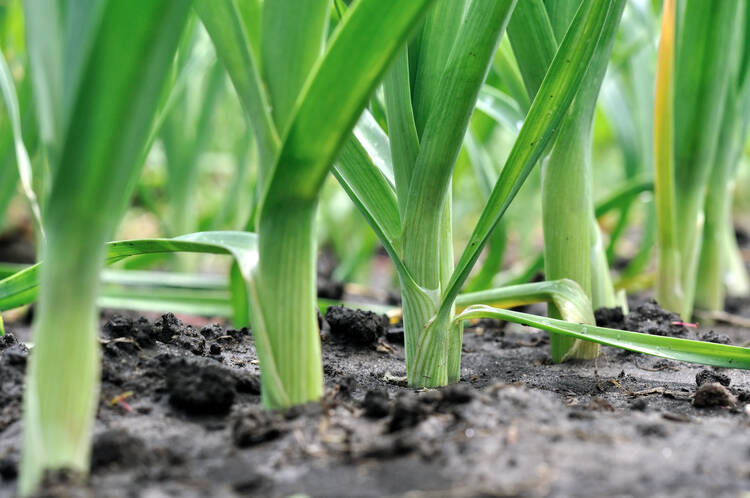 How to make sense of magnolia
branches clacking against glass?
My eyes study the budding limbs
as diners make small talk,
the clink of ice, every glass refilled
once then twice, it’s the first of March,
something tender unfolds from tree bark,
as the world goes on with its business
and the first of the snow comes.

David of Glyn Rhosyn, patron saint
of the Welsh, the Celts sometimes pin
spring bulbs to their jackets on David’s Day.
My bulbs are pinned to a grocery cart
jostled by potatoes, cheddar and bottled stout
scanned by the checkout girl who asks,
What you gone do with these leeks?

Often depicted with a dove
perched on his shoulder, David was better
known as Dewi, protector of vegetarians,
poets and all of Pembrokeshire,
Gwnewch y pethau bychain
mewn bywyd—said David as he died.
Do the little things in life.

Soup, I tell the cashier and later split
the shank sideways and rinse bits of dark earth
from under green flaps—there’s a scent
that comes from cut leeks, like daffodils
and wild onions, like spring pushing up from winter—
which brings to mind the magnolia,
a thousand pink buds headed toward something
that can’t be turned back, no matter the spell
of unexpected weather.