Relative real yields are making the greenback more attractive in G-10 crosses, while stretched positions have speculators on the wrong side of the trade. Conditions are ripe for dollar strength to thwart the risk rally.

While the dollar is being challenged by its EM peers, a corrective phase has the Bloomberg Dollar Spot Index grinding higher as markets pivot away from the perception of all central banks holding at effective lower bounds. That is disrupting long-held correlations — leaving the dollar as a headwind to an ongoing S&P 500 rally. 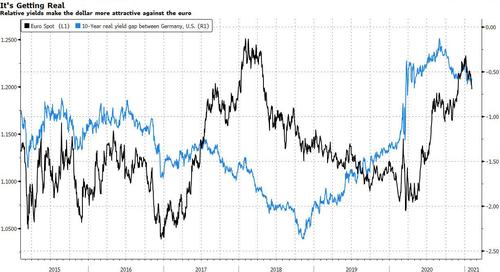 One needs to look no further than the tumbling yen – no longer a reliable barometer of risk sentiment – as the USD/JPY pair extends above 105. The 12-month rolling weekly correlation between the S&P 500 and USD/JPY has extended deeper into negative. Japanese investors directing flows abroad isn’t helping – but the trend reflects the dollar’s dominance in risk-off periods. The same holds for the heavily euro-weighted DXY, as its rolling negative correlation to the S&P 500 extends to multi-year highs. 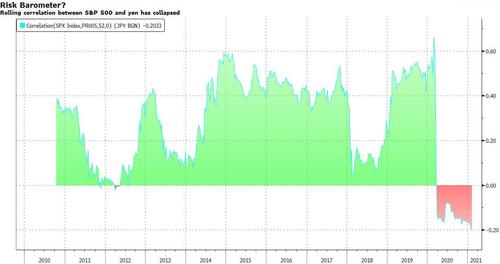 The dollar bounce higher is unlikely to be sustained beyond a Q1 consolidation – rising deficits, Fed QE outpacing peers, and growth recoveries abroad should revive dollar declines. Yet should US yields grind higher, the setup suggests tactically long USD – and the S&P 500 shaking off some of those built-up reflation gains.