In footage that almost has to be seen to be believed, an exercise instructor who regularly leads live-streamed workout routines from public venues inadvertently filmed Monday’s military coup as it was underway behind her.

The exercise instructor was in the middle of her workout routine just as literally a few hundred meters behind her military trucks sped to take over the nation’s capitol complex in Naypyitaw. The video has since gone viral.

Vibe check: A woman doing a live aerobics class in #Myanmar this morning, apparently unaware of the ongoing coup. Military vehicles arrive behind her to seize the parliament building. pic.twitter.com/eZX2w2A4AE

The woman has since been identified as Khing Hnin Wai, a physical education teacher with the Ministry of Education who initially posted the video on her Facebook page where it went viral.

In later media interviews she said she had no idea of the historic events then unfolding immediately behind her.

“Before I heard the news… in the morning, the video I made for the aerobic dance competition has become an unforgettable memory,” she wrote on Facebook. 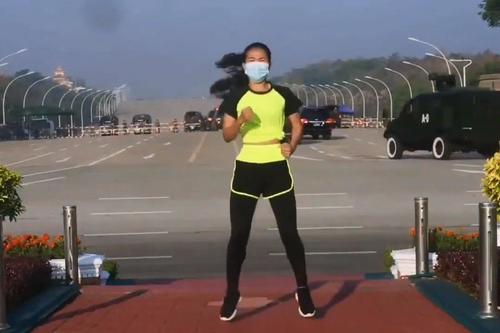 In those very moments Myanmar’s military (the United States still calls the country Burma), had seized and sealed off all central government buildings after raiding the homes and making arrests of the national civilian leadership, most notably Aung San Suu Kyi, leader of Myanmar’s governing National League for Democracy (NLD) party, as well as President Win Myint and senior party figures.

The BBC and other outlets have “confirmed the video is real” after some initially questioned its authenticity. 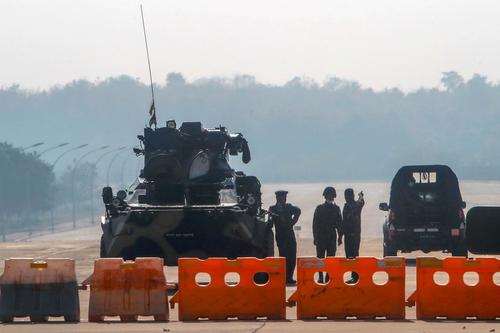 The State Department is now warning of the potential for “civil and political unrest in Burma” following the dramatic military takeover of the country after the army called prior November elections “fraudulent”. This as all international travel has been halted, and various communications including internet were cut to the capital.

The Biden administration has now formally declared it as a coup d’état, which means Washington is required by law to cut off all foreign assistance to the southeast Asian country. It further announced that targeted action will be taken “against those responsible” for the arrests and continued detention of the elected civilian leadership, likely in the form of sanctions.

Previous post: [ The People Vs Navalny: Russia Draws Red Lines To Foreign Meddling In Its Sovereign Affairs ]
Next post: [ Xi, Putin Make The Case For Win-Win, Not Zero-Sum ]