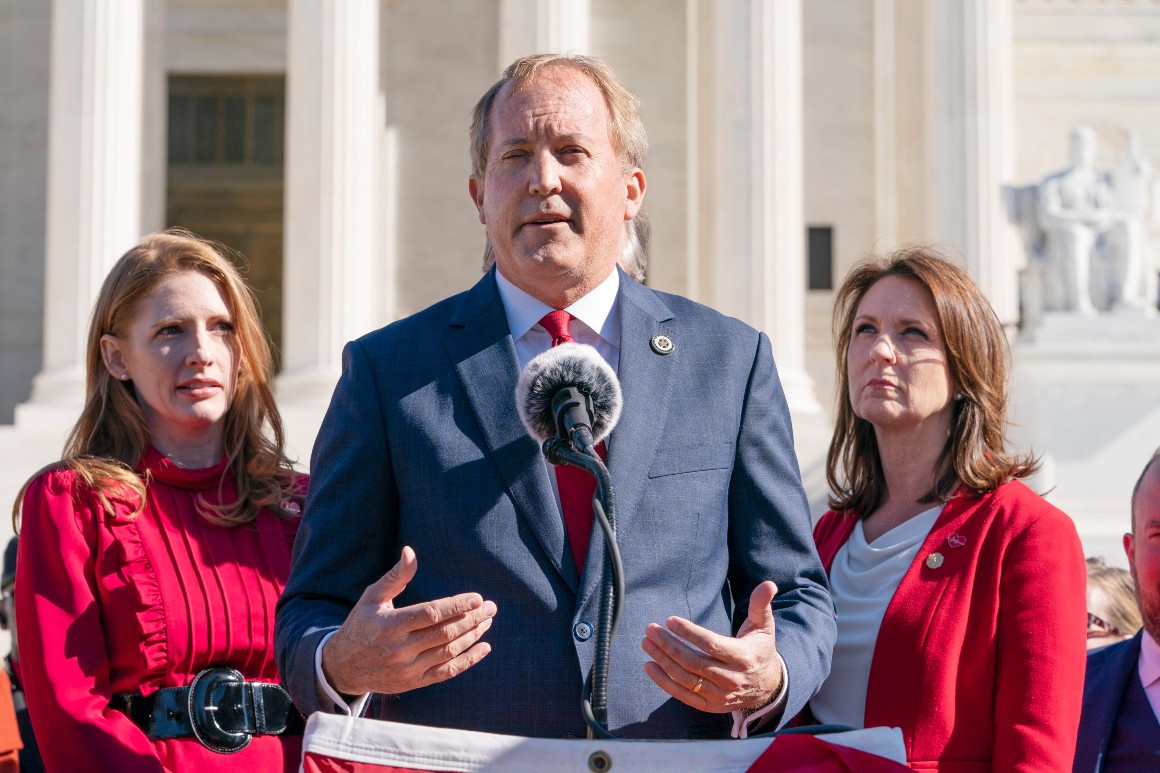 With abortion dominating the Supreme Court’s agenda this term, lawyers and advocates on both sides of the issue were scrambling to read the tea leaves from Monday’s arguments about where the Texas case will come out and where the court is headed on abortion.

Here are POLITICO’s takeaways from the nearly three hours of arguments the high court heard on Monday:

Roe wasn’t on the table, but justices see it around the bend

Monday’s arguments didn’t wade too far into the blockbuster question soon facing the court — whether Roe v. Wade and the successor case Planned Parenthood v. Casey should be overruled or further narrowed — but several comments from the justices indicated that the searing questions they’re set to take up a month from now in connection with Mississippi’s ban on abortions after 15 weeks of pregnancy were already on their minds.

Justice Samuel Alito raised the prospect of changes to longstanding abortion law, asking Texas’ solicitor general about how much of the chilling effect from cutting roughly in half the number of abortions in the state in recent weeks was due directly to Texas’ law, S.B. 8, and “the degree to which it is attributable to the fear of liability if Roe or Casey is altered.”

Texas Solicitor General Judd Stone replied that it was impossible to know.

Kavanaugh also discussed the possibility of a rollback of those precedents, but he seemed deeply troubled that S.B. 8 was written to impose retroactive financial liability on abortion providers if the Supreme Court narrowed the impact of the precedents that now guarantee abortion rights.

“It would be private plaintiffs,” Stone replied.

“Is that a yes?” Kavanaugh interjected.

Both sides of the cases that were argued on Monday warned that a ruling in either direction could trigger an avalanche of legal consequences that range far beyond abortion.

Clinic defenders said allowing Texas’ law to stand would enable states across the country to pass laws empowering regular citizens to file suits interfering with gun rights or religious liberty or free speech. Texas’ representatives said allowing the federal government to intervene in this case would lead to the trampling of states’ rights more broadly.

“The state of Texas was very candid today in saying that an S.B. 8-type law could be used to target those rights — including gun rights, same-sex marriage, birth control, religious liberties,” Planned Parenthood’s Julie Murray told reporters after the arguments. “Many of the questions that came out today were in clear recognition of the fact that whatever happens with S.B. 8, if it is permitted to stay in effect, you are going to see other states turn to the same type of model with respect to other constitutional rights that they disagree with.”

And the lawyer representing Texas used stark language to warn about the threat of allowing federal courts to step in now and block the state’s abortion law before its own courts have had a chance to interpret it.

Stone repeatedly blasted the effort to block the law through an injunction aimed at state courts or judges, calling it “a violation of our whole scheme of government” — a phrase borrowed from a century-old case governing the balance between state and federal power.

After the arguments, Texas Attorney General Ken Paxton, a Republican, dismissed out of hand the questions repeatedly raised about a similar law potentially affecting gun rights — an issue that Kavanaugh made clear was troubling him.

“The focus for me is this case and this case alone,” Paxton said. “Each state has a responsibility to do what they think is right.”

Did the Texas case scramble the court’s usual ideological alignment?

As the arguments played out over the Texas law, some of the justices asked questions that seemed to come from a different ideological perspective than many court-watchers expected.

Barrett — who’s considered very conservative but is still something of a cipher as the court’s newest justice — kicked off the unexpected queries early by noting that the Texas statute was drafted to prevent abortion providers from making arguments to state courts about a general chilling effect on the right to obtain an abortion. That heartened abortion rights advocates.

“It is certainly a promising sign that Justice Barrett recognized that those state court proceedings do not provide adequate relief,” ACLU attorney Julia Kaye told reporters on a call after the arguments.

Justice Stephen Breyer, one of the court’s established liberals, also acknowledged some resonance to the claims from conservatives about the dangers of suggesting that almost any civil suit could be pulled into federal court by going after the state judge involved.

“There are 4 billion tort suits in the United States, OK? And probably in 3 billion of them, somebody thinks something is unconstitutional. All right? So can they all sue the judge?” Breyer asked.

Justice Clarence Thomas, often considered the court’s most stalwart conservative, also offered up queries that were in tension with his expected take on the case. Thomas repeatedly compared the Texas statute to a type of state law known as a “private attorney general” law, in which private parties can step in to enforce state laws.

Thomas’ analogy seemed to suggest that the clinics might have grounds to get federal courts to stop private individuals from suing under S.B. 8 because they could be considered to have been deputized as state actors, akin to a police officer or prosecutor.

Of course, questions are no guarantee of where a justice will ultimately come out on a case. And sometimes justices have been known to put a question to an advocate they agree with in order to get an answer that might be useful in scoring a point with the other side.

Congress gets called on the carpet

Members of Congress might not have expected to be on the hot seat at Monday’s arguments about a law passed by the Texas Legislature, but the justices turned to the role of federal lawmakers on several occasions. Defenders of the Texas statute said Congress could have passed a law to give the federal courts or the Justice Department the right to step in over such a law, but had not done so.

Stone said the clinics and the Justice Department were simply trying to invent legal bases for an injunction without any statute to point to authorizing the federal courts to get involved under these circumstances.

“If Congress believes it needs to expand access to the lower federal courts in order to protect petitioners’ rights, then that is a matter for Congress, not a basis to alter bedrock doctrines organizing the federal courts,” he said. “Congress must create such novel remedies if they are to exist at all.”

Chief Justice John Roberts noted in passing that the current Congress was unlikely to pass anything like that, but other justices were more pointed.

Justice Elena Kagan shot back that “go ask Congress” was an inadequate answer for citizens whose rights are being infringed on.

Justices battle over hypotheticals vs. reality on the ground

Several justices on Monday pressed the attorneys for Texas, the Biden administration and abortion clinics about various hypotheticals. Alito asked multiple times about the possibility of a person who has had an abortion suing their own doctor for emotional damages.

Both Alito and Stone also raised the possibility of individuals suing under the new law over abortions that aren’t protected by the provisions of Roe and Casey, such as abortions later than 24 weeks of pregnancy. They argued that blocking the Texas law could be over-broad because it would keep people from suing over those abortions, which states are free to prohibit.

U.S. Solicitor General Elizabeth Prelogar suggested that this was too hypothetical to be worried about.

“Texas already separately prohibits post-viability abortions,” she said. “The providers don’t provide them. So, I don’t think that that would have any actual real-world effect.”

Kagan, meanwhile, repeatedly sought to bring the arguments back to what’s actually happening on the ground in the state. She noted on Monday that the abortion ban in question had been in effect for most of the last couple of months, giving the court ample evidence of its direct and indirect impacts. Even with the fate of the law up in the air, she pointed out, abortion providers are so afraid of a potential wave of lawsuits that the number of abortions has fallen by about half, according to health researchers at the University of Texas.

“We’ve had a little experiment here,” Kagan said. “You know, usually, in these chilling-effect cases, we’re kind of guessing. Here, we’re not guessing. We know exactly what has happened as a result of this law: It has chilled everybody on the ground.”

Amy Hagstrom Miller, president of Whole Woman’s Health, the network of abortion clinics that spearheaded the challenge to the Texas law, reinforced this point to reporters after the arguments.

“Our staff and doctors have been forced to deny hundreds of patients the abortion care they need and deserve,” she said, noting that the law has been in effect for a total of 62 days so far. “Texans have been forced to remain pregnant against their will or to leave the state to get care that Whole Woman’s Health should be able to provide right here at home. … The legal back-and-forth has also been excruciating and confusing for our patients and our staff.”