‘Ted Lasso’ officially has its own Judas character. 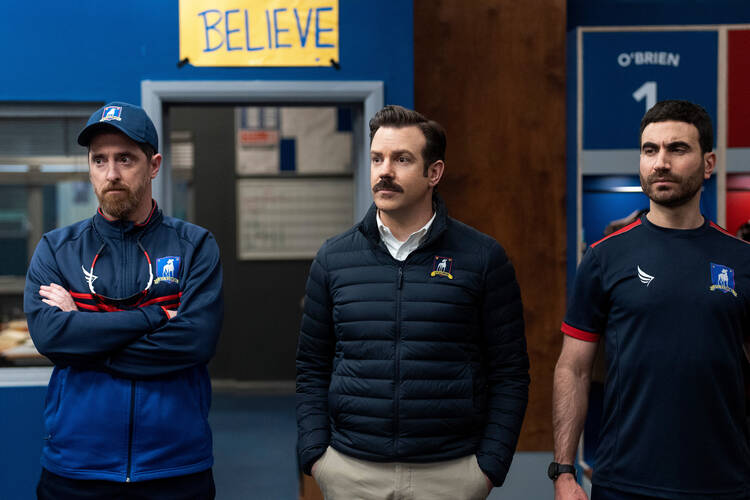 In the Season 2 finale of “Ted Lasso,” during the halftime of a momentous match that is not looking good for AFC Richmond, the titular Ted points toward the locker room and tells his assistant coaches: “Look at it out there. It looks like a Renaissance painting portraying masculine melancholy.”

Cut to the players arrayed in tableau style, mourning and motionless until a water bottle is fumbled. The image is a moment of levity in the midst of a sequence of tense scenes. But in an episode that culminates in a burning-all-bridges betrayal, it is also a kind of Last Supper.

“Ted Lasso” is not an allegory, and Ted is not Jesus. But the ethos of compassion the unsinkable Coach Lasso is trying to nurture among his players and propound in press conferences—the shorthand for which is his locker room sign, “BELIEVE”—is clearly consonant with the Gospel. This may be one reason why the show has made a name for itself as a beacon of hope in a troubled time. Going into the show’s third and purportedly final season, it has become hard to see recurring Christian imagery and themes as either coincidental or inconsequential.

Now a show that has often made a point of painting a nuanced and sympathetic portrait of each of its characters has its own Judas—Nate Shelley, a (for now) unrepentant, turncoat villain who fully inhabits the part. In the pilot, Nate is the first person to feel the transformative power of Ted’s positivity. A lowly kit manager inclined to apologize for his very presence, he cannot believe Ted even asks his name, much less remembers it later. By the end of Season 1, Ted notices that Nate is a font of soccer knowledge and sports psychology insights and promotes him to assistant coach.

But once lifted from obscurity, Nate undergoes a transformation, underscored by the gradual graying of his hair over the course of Season 2. Ted’s inclusive, all-for-one-and-one-for-all approach allows Nate his big break, but after Nate begins thinking of himself as a success, selfishness takes hold. He obsesses over perceived slights and whether he is getting his due. Ted’s emphasis on kindness over winning becomes repulsive. Metaphorically Nate spits on it, just as he is seen literally spitting at his own reflection in the mirror whenever he wants to transform his self-loathing into agency and power.

In fact, DaVinci-esque portraits notwithstanding, Nate may be more Lucifer than Judas. He is gifted, beloved, exalted—and bubbling over with resentment, because none of it is enough. The lack at his core cannot be filled, because he refuses to humble himself and admit it is there. Instead, he lashes out at love and acceptance—and casts himself into the netherworld of West Ham United, where, admittedly, he has to serve the show’s other great villain, owner Rupert Mannion. I don’t claim the parallels are exact.

Nate and Ted have it out. Critics have pointed out that there are truths among the charges Nate throws reproachfully at Ted, and there are. But Ted is not meant to be perfect either. The show is about his struggles and imperfections as much as anything else. Ted is, rather, striving to make people around him feel good, a pursuit he faithfully resumes after every stumble. It is Nate’s wholesale rejection of the pursuit that marks him as fallen. Nate’s choice to tear up Ted’s iconic “BELIEVE” sign symbolizes Nate’s sundering from the group and from the pursuit of good even more than his anger at Ted.

The “dark side” trope, whatever its religious or mythic origins, has established itself in secular culture. Nate has been compared to Cobra Kai and Anakin Skywalker, among other heels. But both the heroes and villains of “Ted Lasso” remain quite ordinary. And it is the show’s portrayal of that daily reckoning with good and evil, those small temptations, that make it easy to relate to despite the fact that it is set in a universe that is somewhat magical and certainly high-profile. The world of “Ted Lasso,” however foreign its events might feel, is fundamentally recognizable as a slice of our mundane 21st-century reality, and because of that it presents a uniquely practical vision of what it is to keep choosing faith, hope and charity in the small moments of life.

The world of “Ted Lasso,” however foreign its events might feel, is fundamentally recognizable as a slice of our mundane 21st-century reality.

The question of choices is explicitly addressed when Ted makes a speech in part to apologize to his players and in part as an appeal to Nate’s conscience. “Fellas, we make a lot of choices in our lives, every single day,” he begins. After mentioning some of the big and small ones he has made in his time, he notes that no choice is reversible, but “every choice is a chance.” This could come across as trite, were it not for Ted’s consistent humility and willingness to make amends, whether the trespass is his or someone else’s. Ted once snapped at Nate, who had inadvertently disturbed Ted signing his divorce papers. His irritability was understandable under the circumstances. But Ted turns his lapse to good. He apologizes to Nate—then has him deliver a pre-game talk that proves a major turning point in his career.

One complaint from the Internet about Ted Lasso is that, for a show about a football team, football too rarely features in the plot. Yet the primary interest of the show and its title character is not winning or losing matches. Instead it is the meta-game of love and forgiveness—and the real demands those high ideals, so easily lost in platitudes, make on our lives when we take them seriously. It is difficult to watch Nate excoriating Ted, and harder to forgive him for it. When Season 3 airs, we will see Ted and AFC Richmond facing their greatest foe yet—not the prowess of Nate or West Ham United, but the temptation to give in to hatred, bitterness and recrimination.

In Ted’s speech, the writers subtly nod to all those blockbuster franchises that pit good against evil: “To quote the great UCLA basketball coach, John Obi-Wan Gandalf, it is our choices, gentlemen, that show what we truly are, far more than our abilities.” The quote is in fact from Albus Dumbledore of Harry Potter, so Ted is referring to three franchises in one. But the guru of the show is the legendary UCLA basketball coach and devout Christian John Wooden, a signed copy of whose “Pyramid of Success” hangs on Ted’s wall.

The pyramid is a visual aid for the argument that competitive greatness starts with virtues including cooperation, industriousness and—right in the center of the base—loyalty. The finale’s title, “Inverting the Pyramid of Success,” is an amalgam of Wooden’s device and a 2008 book on soccer tactics by Jonathan Wilson. But given the show’s true stakes and fundamental concerns, it sounds just as much like a reference to the flipping of worldly values expressed in Chapter 8 of the Gospel of Mark: “For what shall it profit a man, if he shall gain the whole world, and lose his own soul?”