At the start of this week on Monday Myanmar underwent a military coup after army commanders ordered the civilian leadership of the country to be arrested on allegations of a “fraudulent” election in November.

The military had taken immediate control of the streets and tightly restricted communications in and out of the capital of Naypyitaw, which included cutting the internet to the city. The now detained State Counsellor Aung San Suu Kyi has been calling for supporters in her National League for Democracy (NLD) party to protest the junta led by Senior General Min Aung Hlaing. 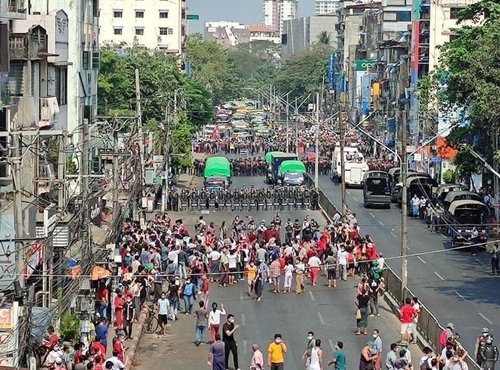 That now appears to be happening, setting up the potential for severe unrest and violence, as Reuters reports, “Tens of thousands of people took to the streets of Myanmar’s cities on Saturday to denounce this week’s coup and demand the release of elected leader Aung San Suu Kyi despite a blockade on the internet by the junta.”

The block on the internet which reportedly also included the cutting of phone lines was aimed at precisely preventing such large demonstrations.

Factory workers from the western Yangon suburb of Hlaing Tharyar block traffic on Insein Road and chant against military dictatorship.

Several thousand workers and students in Myanmar’s largest city have taken to the streets this morning to protest Monday’s coup. (Frontier) pic.twitter.com/aUhICqYZ3o

Update: A near-total internet shutdown is now in effect in #Myanmar.

The response to the growing protests has seen the junta expand the internet restriction from the capital to a total shutdown nationwide, as regional media reports:

The government made attempts to stop mobilization of people by shutting down the internet. The largest telecom operator of Myanmar Telenor has said in a press release around Saturday afternoon time that Myanmar Ministry of Transport and Communication have ordered a temporary nationwide shutdown of the data network service. Voice and SMS services remain open. The internet blockage tracking website NetBlocks reported that around 10 a.m. local time, Myanmar was in the midst of national scale internet blackout.

Massive crowds in streets of Yangon to protest against Myanmar coup and call for release of Aung San Suu Kyi despite ban on internet. https://t.co/2BgfLG2seh #WhatsHappeningInMyanmar pic.twitter.com/xQz6mKUlkm

Reuters describes further the crowds are calling for the immediate restoration of democracy and civilian rule:

Many in the crowds wore red, the color of Suu Kyi’s National League for Democracy (NLD) which won Nov. 8 elections in a landslide, a result the generals have refused to recognixe, claiming fraud.

The widespread commmunications blackout has continued, with the junta claiming for itself a state of emergency powers for at least a year.

This week President Biden condemned what the US now recognizes formally as a coup d’état and announced that sanctions are on the table which would target the coup leaders.

However, the administration might tread cautiously as The Hill notes, “experts say Biden may be wary of pressuring the military there too much out of fear of pushing it further into China’s arms.”