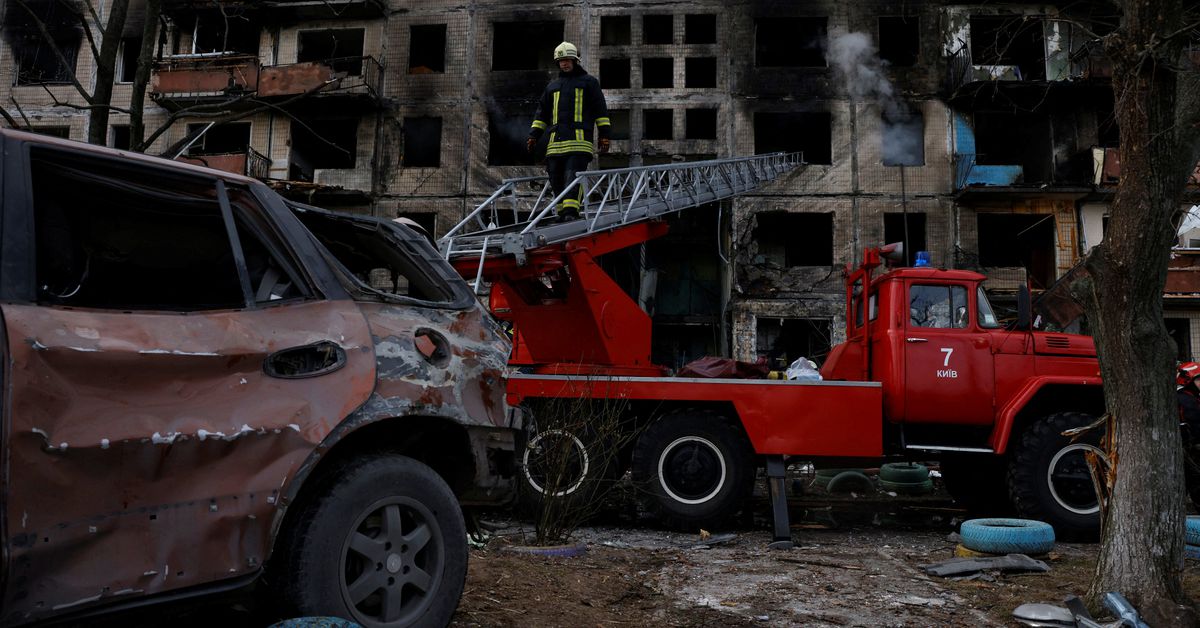 LVIV, Ukraine, March 14 (Reuters) – Ukraine said it would seek to discuss a ceasefire, immediate withdrawal of troops and security guarantees with Russia on Monday after both sides reported rare progress at the weekend, despite fierce Russian bombardments.

Previous rounds of talks have had similar aims but have ended up focused mainly on humanitarian issues and agreed ceasefires to supply towns and cities under siege by Russian forces have frequently failed.

Writing at the expected start time of 10:30 a.m. Kyiv time (0830 GMT), he said he believed Russia “still has a delusion that 19 days of violence against (Ukrainian) peaceful cities is the right strategy.”

Russia denies targeting civilians, describing its actions as a “special operation” to demilitarise and “deNazify” Ukraine. Ukraine and Western allies call this a baseless pretext for a war of choice.

Moscow said earlier it saw no reason for United Nations peacekeepers to be sent to Ukraine, a prospect that had not been widely considered up to now. Pyotr Ilyichev, director of the minitry’s international organisations department, said there was no need for peacekeepers as Russia was in control, RIA reported.

Moscow widened its assault on Sunday with an attack on a base near the border with NATO member Poland.

Ukraine said 35 people had been killed at the base while Moscow said up to 180 “foreign mercenaries” died and a large number of foreign weapons were destroyed. The base has hosted military instructors but NATO said it had no personnel in Ukraine. Reuters could not independently verify the casualty reports.

At least one person was killed and three injured at a residential building in Kyiv on Monday, Ukrainian state television said, while the city administration said the Antonov aircraft plant there had been shelled. Reuters was not immediately able to verify the reports.

Russian troops have yet to enter the capital but thousands of people have died in other occupied or encircled towns and villages since the invasion on Feb. 24.

“Russia is already beginning to talk constructively,” Ukraine negotiator Podolyak said in a video online. “I think that we will achieve some results literally in a matter of days.”

A Russian delegate to the talks, Leonid Slutsky, was quoted by the RIA news agency as saying the negotiators had made significant progress and it was possible they could soon reach draft agreements. read more

Ukrainian President Volodymyr Zelenskiy said the countries’ delegations had been speaking daily by video link and a clear aim of his negotiators was to “do everything” to arrange for him to meet Putin.

“We must hold on. We must fight. And we will win,” Zelenskiy said in a late night video speech.

A firefighter leaves a residential building that was hit by a shell in the Obolon district of Kyiv as Russia’s invasion contiunes, Ukraine, March 14, 2022. REUTERS/Thomas Peter

Global financial markets, which had been riven by fears the conflict could spread and drag in NATO, rallied on hopes for progress in peace talks. Stocks rose while oil prices gave up some of their massive recent gains.

Russian coal and fertiliser king Andrei Melnichenko said the war in Ukraine, a top producer of grains, must be stopped or there would be a global food crisis as fertilizer prices were already too high for many farmers. read more

The West has sanctioned Russian businessmen, including European Union sanctions on Melnichenko, frozen state assets and cut off much of the Russian corporate sector from the global economy in an attempt to force Putin to change course.

Russia’s finance ministry said on Monday it had approved a temporary procedure for repaying foreign currency debt, but warned payments would be made in roubles if sanctions prevented banks from honouring debts in the currency of issue. read more

According to several U.S. officials, Russia has also asked China for military equipment, sparking concern in the White House that Beijing may undermine Western efforts to help Ukrainian defenders,

Asked about Russia’s request for military aid, Liu Pengyu, spokesperson for China’s embassy in Washington, said, “I’ve never heard of that,” while a foreign ministry spokesperson in Beijing accused the United States of “disinformation.”

China found the situation in Ukraine “disconcerting”, he said, adding, “We support and encourage all efforts that are conducive to a peaceful settlement of the crisis.”

Air raid sirens sounded before dawn in many cities and regions of Ukraine, including Kyiv, Lviv, Odessa, Ivano-Frankivsk and Cherkasy.

Authorities said they were stockpiling two weeks’ worth of food for the 2 million Kyiv residents who have not yet fled from Russian forces attempting to encircle the capital.

North of Kyiv, staff operating radioactive waste facilities at Chernobyl have stopped carrying out safety-related repairs as they are exhausted since they have not been relieved since Russia seized the site last month, the U.N. nuclear watchdog said, citing reports from Ukraine.

More than 2,500 residents of the southern port of Mariupol have been killed since the start of the invasion, presidential adviser Oleksiy Arestovych said on Monday. Reuters was not able to verify that toll. read more