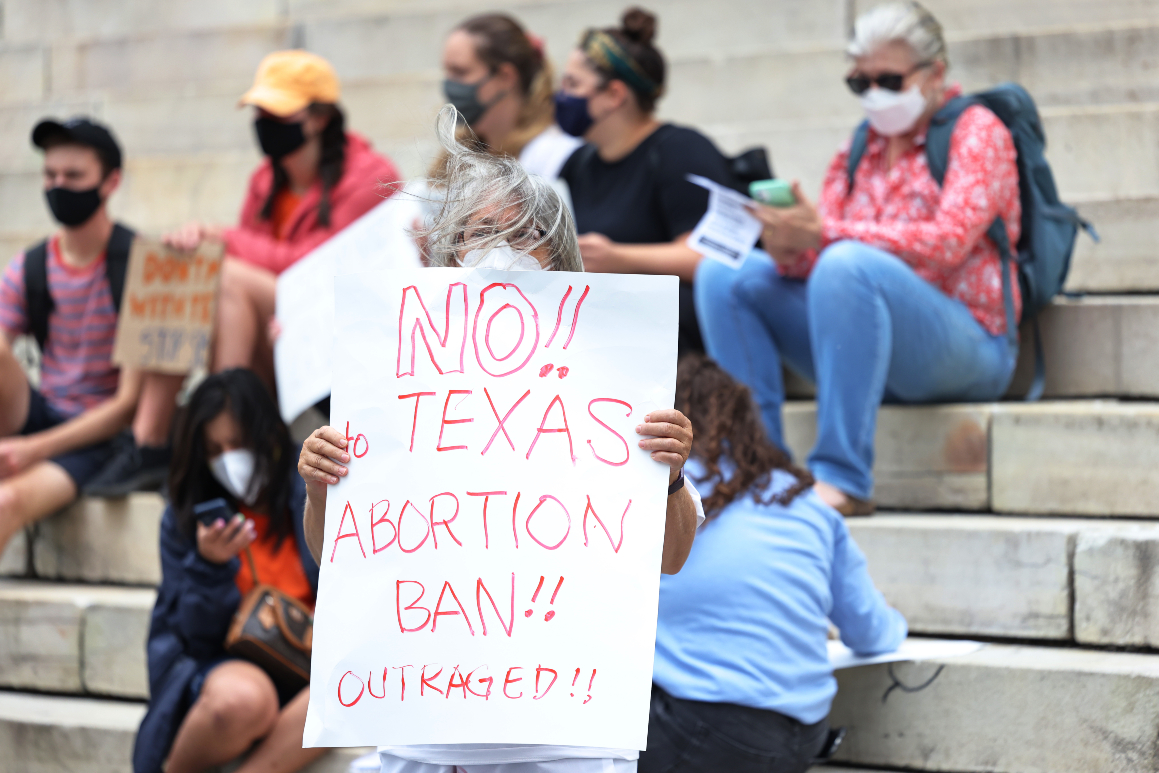 The diverging language is complicating the left’s efforts to remain united on abortion rights and take on Republicans intent on banning the procedure, while drawing national attention to a fight that has long played out in private. And it’s pitting the Democratic Party’s advocacy wing against its political establishment, each of which believes it has the best strategy for protecting access to abortion.

The younger and more diverse advocates pushing for more gender-neutral language argue that describing abortion rights solely as a women’s issue marginalizes the trans and non-binary people who want to terminate a pregnancy, and say being more inclusive helps build stronger political coalitions to take on the right.

“Every time we have staff meetings with people in Congress and the White House, we continue to hammer that abortion is also a trans issue and a trans experience,” said D. Ojeda, a policy advocate for the National Center for Transgender Equality. “Language matters because it shapes our perceptions of the world and it drives our behaviors towards other people. And in the healthcare context, it matters even more.”

But the older generation in government and in some advocacy groups has resisted this shift, fearful of alienating potential supporters and provoking an even bigger backlash from the right.

One former senior leader in the reproductive rights movement said that routinely using the gender-neutral language could threaten efforts to appeal to donors, lawmakers and more moderate voters who they see as crucial to the abortion rights fight.

“What is the end goal here? Is the end goal actually winning, or is it just using the right language at that moment and winning is apparently not a priority?” said the advocate, who asked not to be named in discussing internal deliberations.

Old habits also die hard, even for those who want to be inclusive, and so much of the language in the current legal fight has been baked in for decades. The network of clinics suing Texas, whose president met with Vice President Harris on Thursday, is called Whole Woman’s Health. The bill Democrats plan to bring to the floor that would prevent states from banning abortion is the Women’s Health Protection Act.

Even some longtime progressive stalwarts say they don’t understand the need to strip gendered language from defenses of abortion rights.

“Obviously, ipso facto, it’s an attack on women,” said former Sen. Barbara Boxer (D-Calif.) of Texas’ law and those like it. “We don’t have to say that, because who has babies? Women.”

Yet Boxer conceded that while she views the abortion bans primarily as an affront to women, she’s open to arguments that it also affects others.

The generational divide over these terms is also cleaving the Democrats currently on Capitol Hill. Some of Congress’ younger members, including Reps. Cori Bush and Alexandria Ocasio-Cortez, have recently spoken and posted on social media about the need to protect “birthing people” and “menstruating people” — provoking an outcry from conservatives who accused them of “erasing” or “canceling” mothers.

“Roe isn’t a ‘women’s issue,’” Ocasio-Cortez tweeted Wednesday. “Trans, two-spirit, and non-binary people have always existed and will always exist. People can stay mad about that if they want, or they can grow up.”

Democratic leadership, however, is continuing to talk about the fight solely as a women’s issue.

When Pelosi vowed last week to hold a vote to codify Roe v. Wade in the wake of Texas’ law taking effect, she said the bill would “make sure that women everywhere have access to the reproductive health that they need.”

That preference among senior lawmakers for using traditional gender terminology, current and former advocates said, has sometimes forced them to craft one message for their activist base and another for people in power.

“There was always a tension when talking about members of Congress,” said one former Planned Parenthood staffer. “If you don’t say ‘women,’ they won’t get what you’re talking about. It won’t resonate with them.”

Another former Planned Parenthood staffer said advocates often got frustrated with such lawmakers, accusing them of “choosing political expediency over a strategy that could bring us all closer to justice.”

Biden and his team have largely stuck with a traditional approach to gender. During the 2020 Democratic primary, Biden campaign staffers were less likely to list their pronouns in emails and social media bios than staffers on more progressive campaigns such as Sen. Elizabeth Warren’s.

In the White House, only a handful of officials — such as political director Emmy Ruiz and associate director of public engagement Hannah Bristol — list their pronouns in their Twitter biographies. Although Vice President Harris listed her pronouns on her campaign Twitter account, she does not do so on her official vice presidential account.

Biden himself has never used the term “birthing person” in public remarks as president, according to a review. His Office of Management and Budget, however, did use the term in the budget they released earlier this year — which led to Health Secretary Xavier Becerra and acting OMB Director Shalanda Young to be grilled by Republicans on the Hill. Becerra under questioning did not defend the move as inclusive to trans and non-binary people, arguing only that it was “precise” while distancing himself from the wording choice. Some in the White House thought the budget language was an unnecessary misstep.

Biden’s written statement last week on the Texas law included eight references to women as those who would be hurt by the law and the Supreme Court’s decision to let it take effect.

The White House did not respond to questions about these language choices.

Some advocates for transgender rights expressed disappointment that the president and his top aides are not using gender-neutral language in the ongoing abortion battle.

“Maybe there’s an element of political cautiousness that people feel they care, but they think some constituents or other relevant groups might not want to hear about trans men’s issues or non-binary people’s issues,” said Devin Michelle Bunten, an assistant professor of urban economics at the Massachusetts Institute of Technology. “It’s disappointing — whatever the source of it is.”

Bunten argued that framing the Texas law solely as a danger to women neglects at-risk people who can become pregnant, but don’t identify as female.

“In particular, trans men have really bad experiences with reproductive health care and that sort of erasure of that experience has medical consequences,” she said. “Having this one-sided language thing has really real consequences for people.”

Attorney General Merrick Garland has seemed to straddle the linguistic divide. In a written statement Monday, he said the department was exploring its options “to protect the constitutional rights of women and other persons.”

However, in announcing a new federal government lawsuit against Texas Thursday, Garland omitted the gender-neutral language. Speaking to reporters in-person at a news conference, the attorney general said bluntly that the Justice Department was defending “the women who exercise their right” to terminate a pregnancy.

In the suit filed in Austin, Texas Thursday, Justice Department attorneys framed the issue almost exclusively as an infringement on women’s rights. The 27-page complaint includes more than 30 references to women. The suit’s single reference to “pregnant people” is quoted from a New York Times article, although a footnote refers to “the duration of pregnancy [being] measured from the first day of a person’s last menstrual period.” (The suit also claims the law intrudes on the powers of federal agencies.)

The Justice Department’s use of more traditional language for the abortion-rights debate may reflect the audience the case is likely to ultimately face: the justices of the Supreme Court. In the 5-4 ruling last week refusing to block the Texas law, the dissenting Democratic-appointed justices all described the law as an affront to women.

Indeed, the member of the court widely viewed as its most liberal — Justice Sonia Sotomayor — most aggressively branded the law as an assault on the rights of women. “The Act is a breathtaking act of defiance — of the Constitution, of this Court’s precedents, and of the rights of women seeking abortions throughout Texas,” she wrote in a four-page dissent that contained eight references to the law’s impact on women.

When the new suit will reach the Supreme Court is unclear, but the court’s plan to hear arguments later this year on Mississippi’s ban on abortion after 15 weeks of pregnancy and to revisit the core holdings of Roe v. Wade will put advocates face-to-face with the justices, providing the potential for a high-profile illustration of the linguistic and cultural schism on display in recent weeks.