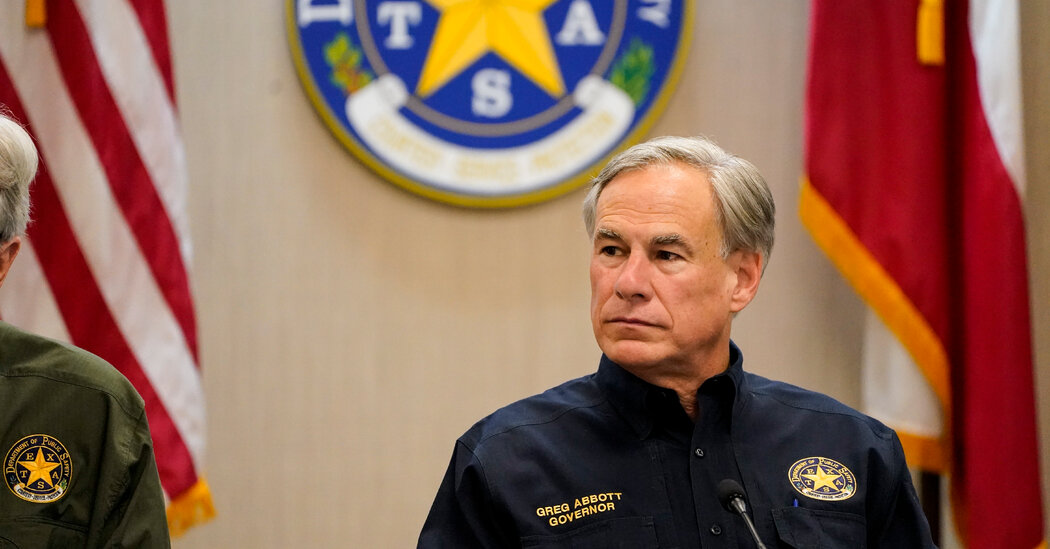 HOUSTON — The Republican-controlled Texas Legislature on Tuesday passed a major bill overhauling the state’s elections, overcoming a six-week walkout by Democrats to cement Texas as one of the most difficult states in the country in which to vote.

The voting restrictions were a capstone victory in Republicans’ national push to tighten voting rules and alter the administration of elections in the wake of false claims about the integrity of the 2020 presidential contest. Gov. Greg Abbott, a Republican, vowed on Tuesday to sign the bill.

The legislation takes aim in particular at Harris County, a growing Democratic bastion that includes Houston and is the nation’s third most populous county. The legislation forbids balloting methods that the county introduced last year to make voting easier during the pandemic, including drive-through polling places and 24-hour voting, as well as temporary voting locations.

It also bars election officials from sending voters unsolicited absentee ballot applications and from promoting the use of vote by mail. The bill greatly empowers partisan poll watchers, creates new criminal and civil penalties for poll workers and erects new barriers for those looking to help voters who need assistance, such as with translations. It requires large Texas counties — where Democrats perform better — to provide livestreaming video at ballot-counting locations.

Including Texas, 18 states across the country have passed more than 30 bills this year restricting voting, one of the greatest contractions of access to the ballot since the Voting Rights Act was passed in 1965. The relentless pace of these voting laws has raised pressure on Democrats in Congress, where a stalemate in a narrowly divided Senate has left them with little hope of passing federal voting legislation that would combat the new restrictions.

Texas, a state with booming urban areas and demographic trends that have long been seen as favoring Democrats, already had some of the nation’s tallest barriers to casting a ballot. It has closed hundreds of polling locations since the Supreme Court invalidated a key part of the Voting Rights Act in 2013, according to a report by the nonpartisan Leadership Conference Education Fund. The state has one of the strictest voter identification laws in the country and does not permit no-excuse absentee voting by mail for voters younger than 65.

Democrats, voting rights groups and civil rights leaders had furiously opposed the Texas bill, called Senate Bill 1, arguing that its impact would fall disproportionately on Black and Latino voters. To delay passage, more than 50 Democratic members of the State House fled the state for Washington in July, denying Republicans the necessary numbers to hold a vote. The move drew national attention and support from President Biden and Senate Democrats, whom the Texas lawmakers urged to pass federal legislation protecting voting rights.

“We knew we wouldn’t be able to hold off this day forever,” Representative Chris Turner, the chairman of the House Democratic caucus, said in a statement on Tuesday. “Now that it has come, we need the U.S. Senate to act immediately.”

As the legislation headed to the governor’s desk to become law, civic and voting rights groups were already preparing lawsuits to its many provisions.

“I tell Republicans all the time, ‘You may have the votes, but we’re all equal in federal court, so don’t delete any emails,’” said State Representative Trey Martinez Fischer, a Democrat who organized the effort to leave the state. “And I think that that’s where we are.”

State Senator Bryan Hughes, the Republican author of the legislation, called the measure “a bill that we can be proud of,” in a speech on the chamber floor in Austin on Tuesday.

“How much fraud is OK?” Mr. Hughes asked. “None. How much suppression is OK? None. That’s why Senate Bill 1 makes it easier to vote and harder to cheat.”

Republicans in Texas have argued that the legislation was necessary to create confidence in the election system and address the possibility of fraud by voters. Throughout the debates in both the House and the Senate, Republican lawmakers pointed to discrete episodes of what they described as improper and fraudulent voting, though not the sort of systematic voter fraud that could have shifted election results. They strongly denied that the bill would disproportionately hurt Black and Hispanic voters, but blocked Democratic efforts to make studying the bill’s impact on voters of color a part of the legislation.

“It is about ensuring that all Texans trust the outcome of every election in Texas,” Lt. Gov. Dan Patrick, a Republican who presides over the Texas Senate, said in a statement.

The voting bill is not the only conservative measure being considered in the Texas capital. The ongoing special session, which followed a notably conservative regular legislative session earlier this year, contains a raft of proposed legislation that is possibly even more contentious.

The list of bills — revived by Mr. Abbott, who faces re-election next year and, for the first time in his 25-year career in elected office, serious primary challenges from fellow Republicans — features priorities of the G.O.P.’s most staunch supporters. The measures include more money for a wall along the border with Mexico, stricter rules on how Texas schools teach about race, bans on receiving abortion drugs by mail and restrictions on transgender athletes in competitions.

The Legislature is also weighing a measure to pre-empt local worker protection ordinances, an effort that would deepen the battle lines between the Republican-dominated state government and Democratic officials in Texas cities.

The passage of the election bill came after an unusually bitter and unpredictable several months in the Texas Capitol.

After the Democratic House members left the state, Mr. Abbott called two special sessions, one after the other. The Republican speaker of the House, Dade Phelan, issued civil warrants for the lawmakers’ arrest. Democrats took refuge first outside Texas and then, when some returned, furtively within their homes or in “undisclosed locations” in the state.

Over time, attention waned and many Democrats wavered. The first 30-day special session expired in early August without any vote. The second one started immediately after and Democrats hunkered down, mostly in Texas, meeting daily via videoconference to try to hold their ranks together. Some trickled in, but not enough to allow Republicans to hold a vote.

Then, on Aug. 19, three Democratic members from Houston surprised their colleagues by showing up together on the House floor at the State Capitol. The move paved the way for Republicans to establish a quorum, and set off a round of finger-pointing and backbiting among Democrats in the state.

That the bill had been delayed as long as it had — the walkout lasted 38 days in all — surprised many in Austin. It raised the national profiles of the Democrats who took to Washington to call for federal voting rights legislation, their only real hope of countering the Republican measures in Texas.

Some Republican members of the Legislature called on Texas citizens and others to help track down the absent Democrats. And outside groups offered money — as much as $2,500 in one case — for information leading to the Democrats, worrying those members that some vigilante might take the law into his or her own hands.

In the end, Republican leaders in the state opted to wait out their Democratic colleagues rather than making arrests — as some more fiery lawmakers called for — to establish a quorum.

The walkout ended as others have in Texas over the years, with Democrats returning to Austin to watch as bills they vociferously opposed passed the Legislature with little of their input.

On Friday, the House passed the bill on a nearly party-line vote of 80 to 41. The Senate had previously passed its version of the bill, but because the House made some revisions to the Senate bill, it was sent back to the Senate for the author of the bill, Mr. Hughes, to concur.

Mr. Hughes agreed to all of the changes but one: He opposed a Republican-introduced amendment that could have helped Crystal Mason and other Texans who were prosecuted for voting. They had voted after being released from prison, unaware that they were ineligible.

A conference committee of the House and Senate removed the amendment. Both chambers of the Legislature passed the final version of the bill on Tuesday.

But the noise made by Democrats, and the national media focus they drew to Texas, did appear to alter at least some measures that had prompted voting rights advocates to view the initial bills as the most restrictive in the country. The final version did not contain limits on Sunday voting hours — seen as an attempt to target “souls to the polls” events at Black churches — or provisions that made overturning elections easier.

It also expanded weekday early voting by one hour and added a provision allowing voters to fix problems with absentee ballots.

Even so, passage of the legislation was a stark demonstration of the political dominance of Texas by Republicans, who hope to hold onto the levers of power in the country’s largest red state. More than 20 Democrats kept up their protest on Tuesday, remaining absent from the House.

“You largely did what you wanted in this bill,” Representative Senfronia Thompson, a Houston Democrat, told her Republican colleagues in the State House before the previous vote on the bill on Friday. “This is your bill. Your idea. And you will be responsible for the consequences.”

Representative Andrew Murr, the Republican sponsor in the House, defended the legislation on Friday, in a voice nearly hoarse from hours of debate. “We want Texans to be confident in the outcome of the system,” he said. “We all strive for improvement, and I believe that that is what we are looking at today with this legislation, is improving the election code in Texas.”