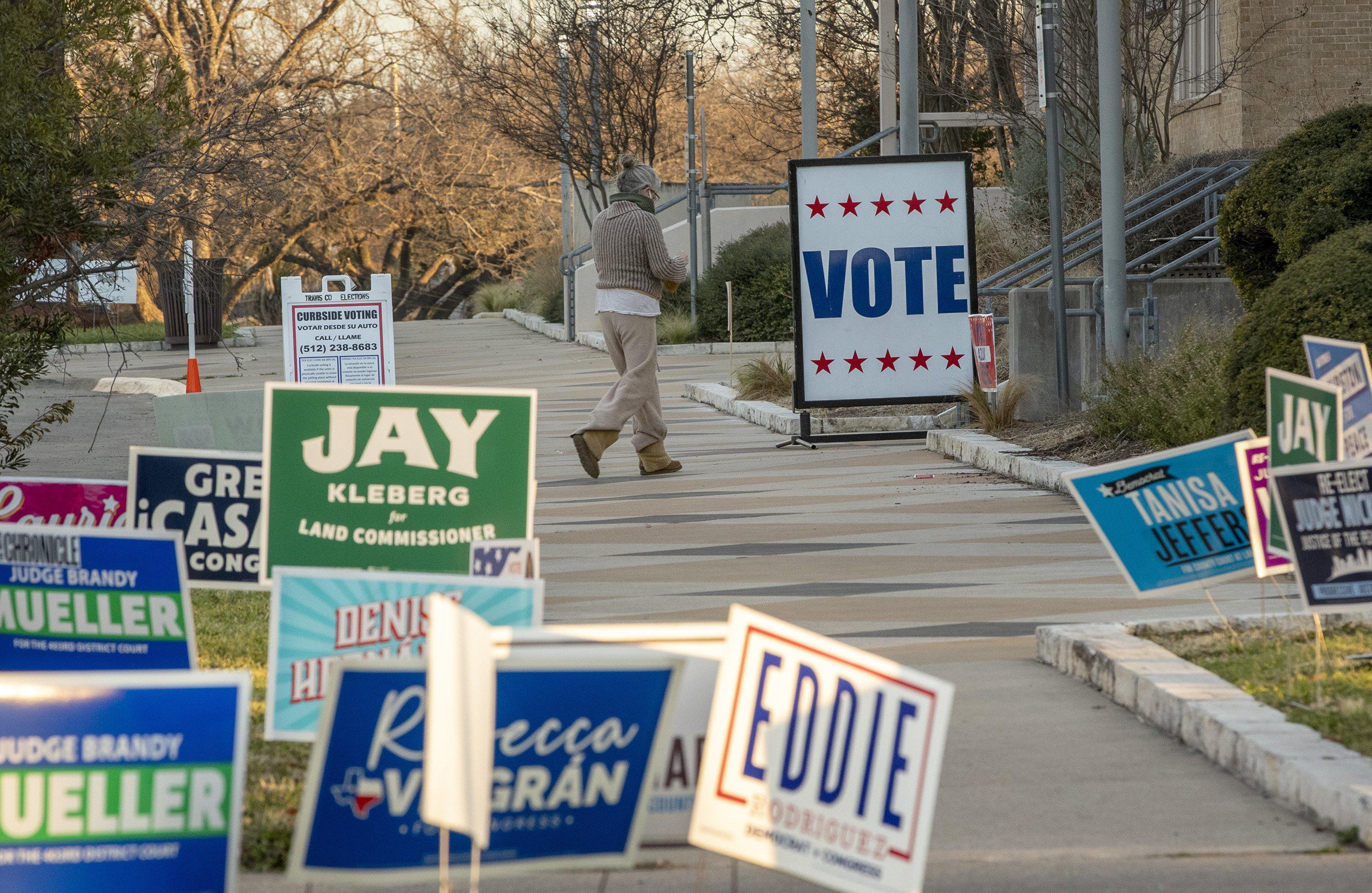 AUSTIN, Texas (AP) — Voters in Texas are ushering in the midterm campaign season with primaries Tuesday that will test just how far to the right the Republican Party will shift in a state where many in the GOP have already tightened their embrace of former President Donald Trump.

Republican Gov. Greg Abbott appears well positioned to secure his party’s nomination for another term. Starting the campaign with more than $50 million, he has built hard-line positions on guns, immigration and abortion.

The GOP primary for attorney general may be more competitive as incumbent Ken Paxton seeks a third term. He’s facing several challengers, including Texas Land Commissioner George P. Bush and U.S. Rep. Louie Gohmert, who are vowing to restore order to the office. Paxton led a failed lawsuit to overturn the 2020 election and has for years faced securities fraud charges and an FBI investigation into corruption allegations. He has broadly denied wrongdoing.

Democrats face challenges of their own after nearly three decades of statewide losses. Former U.S. Rep. Beto O’Rourke has little competition for the party’s nomination for governor, but he faces uphill odds going into the fall. Nine-term U.S. Rep. Henry Cuellar, meanwhile, is hoping to avoid becoming the first Democratic member of Congress to lose a primary this year. He’s being challenged by progressive rival Jessica Cisneros and contending with the fallout of a recent FBI raid on his home. Cuellar has denied any wrongdoing.

Still, in America’s largest Republican state, much of the focus will be on the GOP’s rightward lurch. The evolution is especially pronounced in Texas, where rapid growth — driven by more than 4 million new residents — has shifted once solidly red suburbs away from Republicans. But the GOP has countered that with redrawn maps that left fewer competitive congressional districts along with dramatic new voting restrictions.

Already, thousands of mail-in ballot applications — and actual ballots — have been rejected under the state’s new requirements. Most of those were due to voters not including newly mandated identification, worrying local elections officials that many won’t correct problems to have their vote count.

“Just common sense will tell you there is going to be a number of people who don’t cure that ballot,” said Bruce Sherbert, the nonpartisan election administrator in Collin County, in Dallas’ northern suburbs.

In Houston, morning voters were left standing in line or looking for polling places after a Harris County website that directs people to nearby voting sites went down temporarily. And in Fort Worth, a handful of Democratic poll workers did not show up as scheduled, delaying the opening of some party polling places in Tarrant County. Texas law requires each party to have a separate setup at voting sites.

This year’s primary season is beginning at a pivotal moment in American life.

The U.S. is steadily moving out of the deepest lows of a pandemic that has raged for nearly two years. But that’s tempered by inflation reaching a decades-high level and a burgeoning war in Europe. And there are persistent questions about the country’s commitment to basic democratic principles after many GOP leaders have tied themselves to Trump’s lie that the 2020 election was stolen.

“There really isn’t a candidate on the Republican side who is someone who is standing up for the rule of law and supporting the fact that the 2020 election was free and fair and accurate,” said Christine Todd Whitman, a former Republican governor of New Jersey who is critical of Trump and is the co-chair of States United Democracy Center, a nonprofit that works to safeguard elections.

Tuesday’s results could have lasting implications. After Texas, primaries in other states won’t resume until May. That means results here could be viewed for months as a measure of the nation’s political mood.

Monica Carter, 66, a retired beer distributor, voted Tuesday in the Republican primary in River Oaks, one of Houston’s wealthiest neighborhoods. She said rising crime is the biggest issue facing the country right now, followed by the economy and inflation.

“I think crime is out of hand. The police force needs to be reinforced,” said Carter, who moved to Texas in December and voted to reelect Abbott.

“I want to get back to border control, too, and that is something he is very much focused on,” she said.

Republicans are betting that Tuesday will be the first step toward them retaking Congress in November, pointing to President Joe Biden’s low approval ratings, spiking inflation and anger about the chaotic withdrawal of U.S. forces from Afghanistan.

History is also on the GOP’s side. The party controlling the White House has lost congressional seats in the first midterm race every election cycle this century except in 2002, after the Sept. 11 terrorist attacks.

But the fight over the party’s future is much fiercer than it was 20 years ago.

U.S. Rep. Van Taylor of North Texas, for instance, has become a target for some on the right after he voted to certify Biden’s electoral victory and to create an independent commission to investigate the Capitol insurrection. The Republican now faces four primary challengers who have largely refused to accept Biden’s victory and have tried to minimize the insurrection.

Businesswoman Suzanne Harp, one of the Republicans aiming to unseat Taylor, says the left “is using the divisive language of ‘domestic terrorism’ to subvert attention away from the fraudulent election” and ultimately trying to ensure “President Trump can never run for political office again.”

One of the most storied dynasties in Republican politics could also reach its end Tuesday. George P. Bush, whose father was Florida governor and whose uncle and grandfather were president, is the last of his family in office but may not be able to garner enough support to force a runoff against Paxton, who has been endorsed by Trump.

Cisneros is one of three Texas progressives who could secure Democratic nominations in House districts blue enough to all but guarantee they’ll be headed to Congress.

A 28-year-old immigration attorney who supports Medicare for All, Cisneros nearly toppled Cuellar during Texas’ 2020 primary. She still has to overcome Cuellar’s strong name recognition, though.

Cisneros has been endorsed by progressive stalwarts Vermont Sen. Bernie Sanders and New York Rep. Alexandria Ocasio-Cortez, who campaigned with her and with Greg Casar, an Austin City Councilmember who championed a $15 citywide minimum wage and is favored to win the Democratic nomination for an open House seat representing Texas’ capital.

In Dallas, Emily Winnenberg, 29, who owns a small business, voted in the Democratic primary and said issues like Texas’ new restrictive abortion law and voter rights were top of mind.

“I’m first and foremost extremely concerned with women’s reproductive rights being all but being taken away,” Winnenberg said. “I’m also really concerned about the gerrymandering and the voter suppression that’s happening in Texas.”

She said she was heartened that O’Rourke came so close to defeating Republican Sen. Ted Cruz in 2018 and is hopeful he’ll defeat Abbott this year.

As for Biden, she said she thinks his presidency “has a PR problem, not a logistical problem.”

“I think he’s actually accomplishing a lot for Americans,” she said. “He’s done a good job getting the country back on track in terms of COVID precautions and getting that under control.”