The better way to fast from social media this Lent 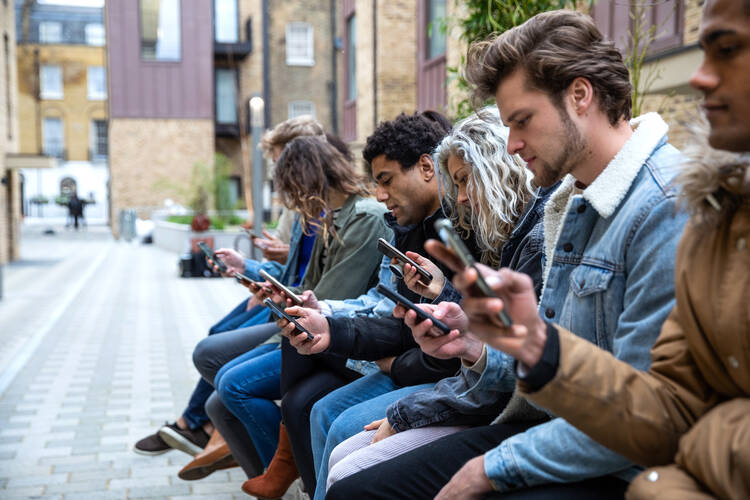 Abstaining from beer and beef, chocolates and cigarettes (e-cigs included!) remain perennial favorites as final selections for Lenten fasts come into focus this week, but in a time when smartphones are rarely more than a hand-reach away, more people are considering a 40-day break from social media as a deeper Lenten sacrifice.

It seems even Pope Francis has social media on his mind this season. “Lent is a propitious time to resist [social media] temptations and to cultivate instead a more integral form of human communication made up of ‘authentic encounters’—face-to-face and in person,” the pope said in his message for Lent.

It is not the first time Francis has expressed discomfort with our iPhoned-in age. Of course, there is no small irony at work here. With more than 50 million followers on Twitter alone, Pope Francis is one of social media’s top global personalities. Could he be projecting?

In a time when smartphones are rarely more than a hand-reach away, more people are considering a 40-day break from social media as a deeper Lenten sacrifice.

Truth be told, lots of us may harbor a social media problem worthy of a spiritual self-assessment this Lent. Donna Freitas, a novelist, religion scholar and the author of The Happiness Effect: How Social Media Is Driving a Generation to Appear Perfect at Any Cost, says you don’t have to dig too deep into a self-examen to find out. Just ask your preferred gadget.

Under your Settings menu, consult “Screen Time.” You may be in for an unpleasant shock as you scroll through its mercilessly detailed report of daily and weekly hours spent on the phone. Look under “activity” to learn which life-sucking social media apps are your worst offenders and how many iPhone pickups worry your day. (Hey, no one is going to just give you carpal tunnel syndrome!)

“That’s the wonderful thing about Lent, right?” says Brian Patrick Green, the director of technology ethics at the Markkula Center for Applied Ethics at Santa Clara University. “You’re giving something up, and then you discover whether you can actually give it up or not.

“Can you put the thing down?” he asks. “Can you kind of detoxify from it or whatever negativity might be emanating from that technology? Do you actually have control over it, or does it have control over you?”

Ms. Freita’s blunt assessment is that we’re all addicted to social media at this point. Like the gambling industry’s slot machines, social media apps are designed to addict us, she says, and they often succeed.

Our behavior on and consumption of social media often stumbles into seven-deadly-sins territory, Mr. Green says. There is a clear element of gluttony at work in the sheer amount of time we devote to social media, but it is not long before other sins come into play.

How about envy as we scroll through our friend’s apparently perfect vacations and families on Facebook and Instagram? And Twitter has become the playground of partisan and interreligious wrath, as well as extreme lastwordists.

Mr. Green recalls that Linkedin founder Reid Hoffman even jokingly referred to the seven deadlies as a solid investment strategy. He explains that it is important to understand “these companies are trying to exploit human weaknesses.”

“That is their business model,” he says, describing the unseen algorithms working in the background to feed you content. “It’s giving you what you want, but it turns out that what we want isn’t always what’s best for us.”

Beyond simply locking away your mobile phone, increasingly an impossibility in our hyperconnected era, other basic strategies have emerged to combat the addictiveness of the phones and their social media apps. Many fasters set their phone screens to grayscale to reduce the glamour of colorful design elements, Mr. Green says. Others move apps they are trying to resist off their phone’s main page, hiding them in Siberia-level app groups, or simply delete them altogether.

Letting friends know your intentions should also help in motivation and accountability.

The same principle is at work during a social media fast. “Social accountability is absolutely a good thing to do,” he says. And when you make that announcement on social media, “not only is it very public, it also lets people know that they shouldn’t expect to see you there for forty-some days.”

“I’ve often thought that the longevity of Lent is kind of God’s gift to us, recognizing that we need to be patient with ourselves. We’ve got five weeks, six weeks to figure this out.”

However, Paul Jarzembowski is not a fan of “total abstinence” when it comes to social media and Lent. Mr. Jarzembowski is the associate director for laity at the U.S. bishops’ Office of Laity, Marriage, Family Life and Youth and the author of Hope From the Ashes: Insights and Resources for Welcoming Lenten Visitors.

He advocates cutting down on social media consumption while striving to become “more intentional” with time spent on social platforms. He worries that a Lent spent avoiding rather than learning from social media could mean that at dawn on Easter Sunday, “the issues you have now are only going to compound themselves.”

Smart fasting, he argues, makes a better approach. “If we are going to fast, what is it that we’re going to fast from? Being cynical or even polarizing on social media? That’s worth giving up, but maybe not necessarily [becoming] disconnected altogether because there’s many people, especially young people, for whom their only connection is social media.”

Mr. Green likewise endorses gradualism. Users can put the phone’s technological sophistication to their own good use, tracking time on screen and setting up daily limits for offending apps. His daily 15-minute limit on Facebook is not absolute—he can elect to override the cutoff—but it has managed to prevent him from losing entire mornings to the app.

“One of the things I think that people discover is that actually giving up these things might not be as bad as they thought it would be.”

There are, for one thing, other options in competition “for your eyeballs,” he says, which raises a different dilemma: Are you honoring the spirit of a Lenten fast if you successfully dodge social media to only devote that liberated time to extra hours of Netflix?

“Don’t fill that time with other empty media,” Mr. Green says. Take a walk in the woods, talk to a loved one, “maybe find a prayer book or something spiritual that you’re nourished by for that period.”

Noting a longstanding distinction in Catholic social teaching, that the economy is intended to serve humankind rather than the other way around, Mr. Green says the same is true for technology.

“There’s a definite impulse from these corporations to exploit their users, and it’s time for us to say, ‘No, we’re not gonna do that.’”

It is worth remembering that we are not just users of social media; we are the product shared with corporate buyers who are seeking insight on our habits, interests and willingness to buy things. “We need to take our power back,” says Mr. Green.

“Don’t fill that time with other empty media. Take a walk in the woods, talk to a loved one, “maybe find a prayer book or something spiritual that you’re nourished by for that period.”

Precisely because most of us are “constantly on it,” unlike other Lenten fasts (such as abstaining from drinking or eating candy), giving up social media, Ms. Freitas says, can truly be a transformative experience. It “really opens you up to the world and paying attention to it, to the people around you and just to being in your own mind and yourself in a way that none of these other [fasts] quite do.”

Her students know they will be required to experiment with custody of their eyes and minds as part of the curriculum. They are often pleasantly surprised by what they achieve in reconnecting with themselves and family during media fasts. One student told Ms. Freitas how much more her nieces “liked her” when they no longer had to compete with her smartphone for her attention.

And above all, don’t be discouraged if your efforts to contain your social media problem don’t achieve immediate results.

Lent is long for a reason, Mr. Jarzembowski says. “I’ve often thought that the longevity of Lent is kind of God’s gift to us, recognizing that we need to be patient with ourselves. We’ve got five weeks, six weeks to figure this out.”

Lent is like baseball spring training, he says. “We try it out, build up certain habits, and the strikeouts don’t count.” If we “we mess up, it’s all right.” Lent, Mr. Jarzembowski says, is practice “for the rest of our lives.”