The Editors: Roe v. Wade was a legal and moral travesty. Its end can bring true justice for women and the unborn. 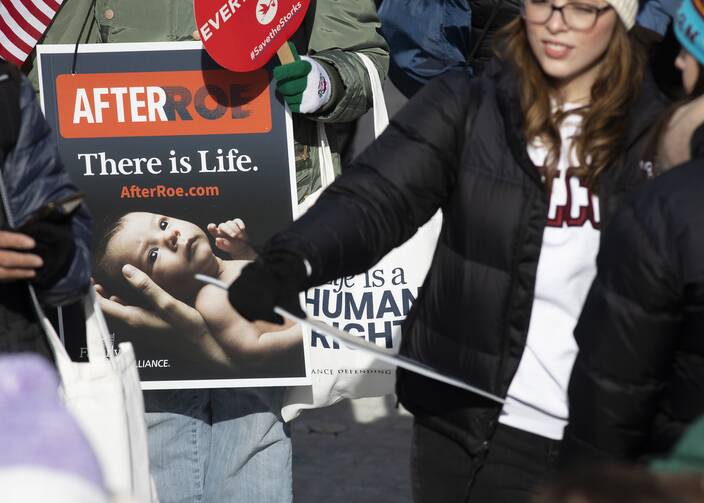 In early May, a leaked draft of a majority opinion in the Dobbs v. Jackson Women’s Health case, now before the Supreme Court, indicated that the court was on the verge of overturning its precedents in Roe v. Wade and Planned Parenthood v. Casey. The Supreme Court confirmed that the leak was an authentic draft, dating from February. While it is not clear how closely the final ruling, expected sometime in late June or early July, will resemble the draft, at least two conclusions can be drawn.

First, the Mississippi law at issue in Dobbs, which bans abortion after 15 weeks of gestation, is almost certain to be upheld. And unless Chief Justice John Roberts convinces another conservative justice to join him in a more limited decision, it seemingly will be upheld by overturning Roe and Casey entirely. Second, both the unprecedented leak itself and the ensuing furor over the potential decision—which has already included protest marches, vandalism and arson of a pro-life group’s headquarters, and angry demonstrations outside the homes of Supreme Court justices who are expected to sign on to the opinion—demonstrate that nearly 50 years of trying to resolve abortion policy at the Supreme Court has been an abject failure that has contributed to thoroughly politicizing the court.

The editors of America have long argued that as a constitutional matter abortion is properly a question for state legislatures.

The question that remains, then, is this: What is the right path forward from this point, with regard to both the substantive question of abortion policy and the political discourse around the issue?

The editors of America have long argued that as a constitutional matter abortion is properly a question for state legislatures. Further, as a moral matter, unborn human life is deserving of legal protection through restrictions on abortion, which must be accompanied by protections for pregnant women and support to make it possible to welcome a child in economic security. For both of those reasons, we welcome the prospect of Roe being overturned and better abortion laws being made possible. We continue to call on our allies and colleagues in the pro-life movement to work for social safety net policies that can help reduce the incidence of abortion. A failure to do so while lobbying for increasingly severe abortion restrictions will harden hearts and minds against recognizing the moral duty to protect unborn life.

We have also long believed that, pragmatically, Roe and Casey have led to more deeply entrenched divisions over abortion. Rather than cooperation and compromise, these court decisions have incentivized pro-choice advocates to oppose any and every substantive restriction on abortion all the way to the Supreme Court. We do not see a realistic possibility that such incentives can change as long as the constitutionality of any abortion law turns on how at least five justices apply Casey’s vague “undue burden” standard. That means that the best hope—albeit a narrow one—for better political discourse on abortion remains removing the obstacles of Roe and Casey and returning the issue to the normal order of legislative politics.

Enmity and fear of people on the other side of the abortion issue will not be easy to overcome.

Even if Chief Justice Roberts were to succeed in securing a more limited ruling upholding a 15-week limit on abortion while deciding nothing else, the question of abortion would be back before the court in short order. Other states could propose laws banning abortion after 10 or 12 weeks, or a challenge to the private enforcement of the six-week Texas ban could finally make it to the court in a way that cannot be dodged. And if that next case pares down Roe and Casey a bit more without overruling them, there will be another case after that. Endless repetition of the same process will not produce a stable resolution to this question.

The U.S. public has remained deeply divided over abortion for decades, and both political parties have become expert at exploiting that division for partisan ends. While overturning Roe and Casey will not end that partisanship, as long as abortion policy can only be meaningfully affected by nominations to the court, abortion will remain a wedge issue dominating politics.

For these same reasons, we believe that the pro-life movement should not pursue the constitutional recognition of fetal personhood through the courts as a way to unilaterally restrict and criminalize abortion. Since the Constitution is as silent on this matter as it is on abortion, a court ruling establishing fetal personhood would be the mirror image of Roe’s fundamental error, likely locking the country into a proxy war over the issue through judicial nominations.

The stance of the Catholic Church against abortion derives from a committment to the sacredness of every human life regardless of circumstances, in the womb or outside of it. To protect life everywhere else but to deny such protection to the unborn is to participate in what Daniel Berrigan, S.J., once denounced as “a human horror,” in which the lives of the unborn are considered among those that do not deserve rights and dignity. “Civilized people,” said Father Berrigan, “have no business disposing of life at whatever stage.”

The Catholic Church teaches that the embryo, as human life, “must be treated from conception as a person” (Catechism of the Catholic Church, No. 2274). This is a moral argument, which implicitly acknowledges that there is no objective way to identify a moment in human development at which the moral actors can be confident that a less-developed human being is not yet a person and so may freely be killed. Catholics are called to convince our fellow citizens of the shared duty to protect human life through argument and democratic activism and should not seek to impose it by judicial fiats, which rely on inevitably strained constitutional arguments.

What is most needed in the public debate on abortion is an honest moral reckoning with the two goods that are in tension when a woman faces a pregnancy she feels she cannot continue: her bodily integrity and personal autonomy, and the dignity of the unborn life that is entirely dependent on her. Under the incentives Roe helped establish, advocates for one good tend to ignore or elide the other, while vilifying opponents who are doing the same. Enmity and fear of people on the other side of the abortion issue will not be easy to overcome. But the call to love and do justice both to women and to the lives of the unborn demands nothing less.