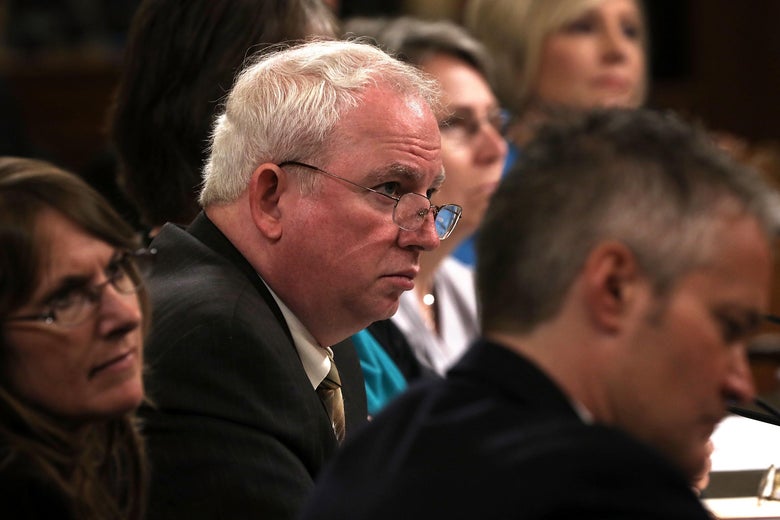 The intellectual ringleaders of Donald Trump’s failed coup are finally facing the threat of serious consequences for their integral roles in the legal plot to overturn the 2020 election.

No lawyers did more than John Eastman and Jeffrey Bossert Clark to try to hand Trump an unearned second term. Eastman developed and promoted the theory that Vice President Mike Pence could reject Joe Biden’s victory, then endorsed it at the Jan. 6 rally that fomented the insurrection. Clark urged his Justice Department superiors to pressure several legislatures into awarding their electoral votes to Trump even though Biden carried their states. Both men remain practicing attorneys.

Now, however, their ability to practice law is under threat. On Monday, a bipartisan group of lawyers, including two former federal judges, asked the California bar to investigate Eastman. One day later, a different bipartisan group of lawyers, including two top-ranking Justice Department officials under George H.W. Bush, asked the D.C. Court of Appeals’ disciplinary panel to investigate Clark.

Forestalling a future assault on democracy will require a repudiation of the conspirators who tried to steal the last election.

These requests could lead to the revocation of Eastman’s and Clark’s license to practice law, a critical first step toward stigmatizing the malignant theories both men pushed for months. Given that the conservative legal movement has refused to criticize their work as out of bounds, the complaints also provide a new opportunity for the mainstream legal establishment to confirm that a lawyer who tries to overthrow an election has proved himself unfit to practice law.

Both letters are supported by a remarkable roster of heavyweights. The Eastman letter was signed by retired judges on the state and federal level, state attorneys general, U.S. attorneys, and governors. It highlights Eastman’s key role in the development of the theory that Pence could toss out Biden’s victory on Jan. 6 when counting electoral votes. In two memos, Eastman laid out a putative pathway for Pence to unilaterally reject Biden electors from seven states, effectively disenfranchising tens of millions of Americans. He championed this idea at Jan. 6’s “Stop the Steal” rally onstage with Rudy Giuliani (whose law license was later suspended). And he spread baseless conspiracy theories all the while, insisting that Trump lost due to widespread fraud of which there was no evidence. (On Jan. 6, he claimed that Democratic operatives hid Biden votes in a “secret folder” within voting machines.) Eastman also filed a brief on Trump’s behalf asking the Supreme Court to overturn the election by nullifying millions of valid votes.

Here is John Eastman, chairman of a Federalist Society practice group, at the pre-insurrection rally spouting conspiracy theories about voter fraud. He concludes: “Anybody that is not willing to stand up and [vote to overturn the election] does not deserve to be in the office!” pic.twitter.com/auD2vXSjNE

The Eastman letter, which was spearheaded by the States United Democracy Center, alleges that these and other unscrupulous actions violated both the California Rules of Professional Conduct and the State Bar Act. These rules prohibit attorneys from assisting a client “in conduct that the lawyer knows” to be fraudulent, illegal, or deceptive. They also bar lawyers from making any knowing or reckless “false statement of material fact or law.” Throughout his crusade, Eastman continually lied about both the facts and the law, alleging nonexistent voter fraud while asserting that Pence could throw the election through a laughably unlawful scheme. The letter asks the California bar to investigate this unethical legal work, a process that could lead to Eastman’s disbarment.

Like the Eastman letter, the Clark letter drew support from an all-star cast of lawyers across the political spectrum. Donald Ayer, deputy attorney general under George H.W. Bush, signed, as did his former colleague Stuart Gerson, who served as acting attorney general under Bush. The letter lays out Clark’s corrupt efforts to throw the Justice Department behind Trump’s plan to overturn the election. Although he joined the DOJ as an environmental lawyer, Clark ascended to assistant attorney general of the Justice Department’s civil division in Trump’s final months. In this capacity, he hatched a plot to coerce swing states’ legislatures into denying the legitimacy of Biden’s victory and to award their electors to Trump instead. In a draft letter, Clark alleged that mass voter fraud had tainted the race, requiring legislatures to toss out the results—exclusively in states won by Biden—and declare Trump the true winner. When acting Attorney General Jeffrey Rosen refused to send this letter to seven state legislatures, Clark launched a conspiracy with Trump to oust Rosen and seize his position.

Like California’s, the District of Columbia’s ethics rules forbid attorneys from engaging in “dishonesty, fraud, deceit, or misrepresentation.” The courts have interpreted this prohibition to encompass “conduct evincing a lack of honesty, probity or integrity in principle,” as well as “recklessly false misrepresentations” of facts and law. D.C. law also bars lawyers from engaging in “conduct that seriously interferes with the administration of justice.” The Clark letter argues that Clark ran afoul of these rules by lying about nonexistent voter fraud—then using these lies as the basis to interfere with the election by persuading states to illegally certify Trump as the winner. Put simply, Clark tried to thwart “the administration of justice” by endorsing the president’s illicit conspiracy on behalf of the United States.

At this early stage, it’s impossible to say whether these letters will spur a serious investigation that culminates in the disbarment of either man. But the effort demonstrates that some attorneys in the U.S. will not tolerate coup abettors in their professional community.

It’s important to remember that Eastman and Clark were not obscure cranks, but established figures in the conservative legal movement. Both men led influential practice groups within the Federalist Society, and Eastman was a powerful figure within the organization. Despite the ample evidence that both tried to steal the election for Trump, they have faced little to no apparent backlash from fellow conservative attorneys. According to David Lat, the Federalist Society “slow-rolled” Eastman’s departure from its practice group so it didn’t “look like they were reacting to pressure.” Although he resigned from Chapman University, Eastman remains a senior fellow at the far-right Claremont Institute, filing briefs at the Supreme Court. Clark, meanwhile, landed a position as chief of litigation and director of strategy at the New Civil Liberties Alliance, a law firm that battles “the administrative state.” (The group’s most recent battle: fighting COVID vaccine mandates.)

If conservative lawyers won’t ostracize Eastman and Clark, the job falls on those officials responsible for protecting the practice of law from corruption. And it is an incredibly important job. Eastman, Clark, and their co-conspirators sought to bring fringe, anti-democratic theories into the legal mainstream. In doing so, they laid the groundwork for a much more organized attempt in 2024. Next time around, the conspirators will have shored up their bogus theories, dressing them in the garb of Federalist Society–approved legalese. They will talk less about secret folders and more about the “independent state legislature doctrine,” as my colleague Rick Hasen has already warned. And they will assert that they are simply vindicating enduring constitutional principles that give a handful of politicians the power to decide presidential elections contrary to the will of the people.

Forestalling such an assault on American democracy will require a full-throated repudiation of the conspirators who tried to steal the last election. That process begins with a formal acknowledgment that overthrowing an election is an illegitimate use of a law license. Disbarring Eastman and Clark won’t solve the impending crisis. But it will at least put conservative attorneys on notice that such lawless behavior will not go entirely unpunished.