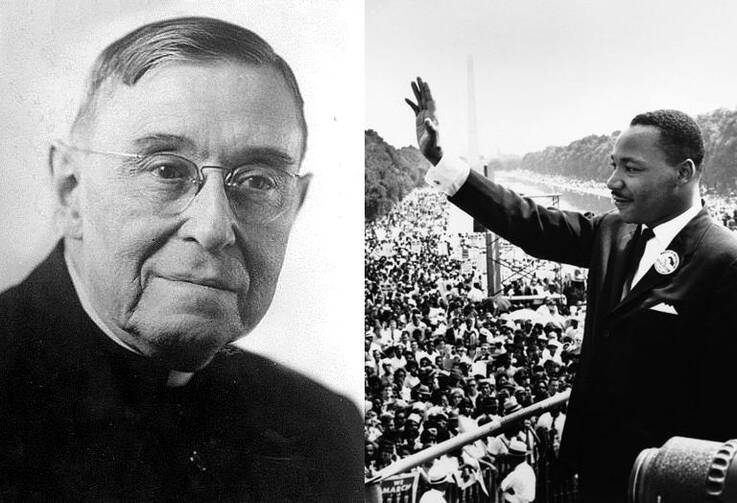 Two weeks after Martin Luther King Jr. was assassinated in 1968, the editors of America wrote the following in an editorial:

There is only one question, a question for every man, woman and child in this country: Will this prophet be heard in death as he was not heard in life? Will the martyr accomplish by his blood what he could not achieve by his words? Will we make the dream of Martin Luther King come true?

King’s murder just as his prophetic call for racial justice in the United States was reaching its crescendo inspired a passionate plea from the anonymous writer of the editorial, who also wrote: “We mourn that the prophet must die in order to be heard. We are ashamed that his last and most eloquent word must be the shedding of his blood. What must not happen is that even this last word go finally unheard. The prophet must not have died in vain.”

“We mourn that the prophet must die in order to be heard.”

As we commemorate Martin Luther King Jr. this coming Monday with a national holiday, it is important to recognize that the Catholic Church (including the Society of Jesus) has had its own shameful role to play in our nation’s long and painful history of racism. At the same time, in the 1960s the editors of America found themselves simpatico with the aims and dreams of the Civil Rights movement to a degree that would not have been possible without the pioneering work of a longtime editor at the magazine and a major figure in the struggle for civil rights: John LaFarge, S.J.

Father LaFarge, the scion of a prominent artistic family in the United States, served as editor in chief of America from 1944 to 1948 and as an associate editor for many years before and after. In those years, LaFarge tirelessly advocated for the rights of African Americans in the pages of America as well as in many books and speeches. He was on the dais when Dr. King delivered his “I Have A Dream” speech in 1963, a recognition of his decades of advocacy for racial justice.

Pope Pius XI asked John LaFarge to help write an encyclical on racism; the target of the encyclical was clear—the racist policies of Nazi Germany.

In that book and several following, LaFarge argued that human rights were natural to all people regardless of race, class or creed; the rights of individuals were not bestowed by governments, but were merely protected by them. The argument found an enthusiast in Pope Pius XI, who in 1938 asked LaFarge to help write an encyclical on racism, to be titled “The Unity of the Human Race” (Humani Generis Unitas). The target of the encyclical was clear—the racist policies of Nazi Germany. Though the encyclical was never released, it formed the basis for much of the Catholic Church’s human rights policies in the aftermath of the Second World War.

LaFarge died on Nov. 24, 1963, at the age of 84. “He was never one to identify the status quo with the Law of God,” his fellow editors wrote after his death, “nor, by the same token, to lose the vision of ultimate and abiding values underlying social change.” America’s editor in chief at the time, Thurston N. Davis, S.J., noted LaFarge’s enormous impact on the direction of the magazine: “Whatever influence [America has] today, what authority we can muster in the world of the press, we owe largely to this gently dogged priest whose broad sympathy for his fellow man spanned the whole world round and constantly spilled over onto our pages.”

We have also tried to cover the theological expressions of those who picked up King’s mantle in the decades that followed his death, including James H. Cone. In this 2019 review for America of Cone’s memoir, Said I Wasn’t Gonna Tell Nobody, Anthea Butler noted that “Cone’s autobiography speaks to one of the most pressing issues of our time, racism, through the pain of his experience and the strength of his writing. For Catholics today, it holds one other important truth: Theology does not arrive out of a sterile doctrinal laboratory but from the pains, sufferings and triumphs of the people of God.”

“The richness of black culture undergirded his theological mien, and it is the first important lesson of the book: Theology does not exist in a doctrinal vacuum,” Butler wrote. “It is culled from the culture of the people and the times in which they live, as well as from Christian doctrine and the life of Christ. It does not ignore the signs of the times.”

One line in particular in Cone’s memoir struck Butler as emblematic of the current struggle for racial justice in the United States: “The ever-present violence of white supremacy—psychic, physical and spiritual—in the black community should be the chief concern of white Americans. Reconciliation is a white responsibility.”

As for Father LaFarge, he recorded his reflections on the “March on Washington” on Aug. 28, 1963, for America, calling it “but a beginning, a summons to unceasing effort. The hour is bound to come—and the less delay the better—when North and South alike will set a final seal upon its simple goal of jobs and freedom for all citizens—yes for all.”

If you noticed these past few weeks that we have taken a bit of a deeper dive than usual into one author or theme, you’re a close reader of America’s literary criticism. In this space every week, we will feature reviews of and literary commentary on one particular writer or group of writers (both new and old; our archives span more than a century), as well as poetry and other offerings from America Media. We hope this will give us a chance to provide you more in-depth coverage of our literary offerings. It also allows us to alert digital subscribers to some of our online content that doesn’t make it into our newsletters.

Joan Didion: A chronicler of modern life’s horrors and consolations

John Updike: Suspicious of Santa, but fond of Christ