The TikTok star who melds Catholic tradition and progressive politics 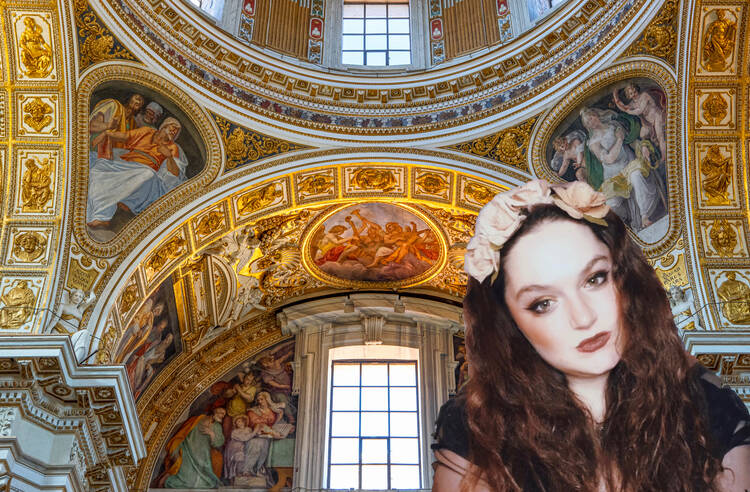 As a young(ish), politically progressive Catholic, finding places where my deep love for tradition and desire for Spirit-led reform coexist peacefully is difficult. Unexpectedly, I found a space for this on TikTok at the HippieCatholic, a.k.a. Kassidy Beane.

In the past few months, Beane has gained almost 19,000 followers (and counting). Utilizing her B.A. in marketing and a double minor in intellectual property management and philosophy and religion, Beane creates a digital community space that I wish more Catholics would foster in real life.

“Hippie” is her actual aesthetic, and honestly, I’m here for it. During our Zoom interview, she wore a headband of pink flowers on top of her head and a Saint Joan of Arc medal around her neck. Multicolored string lights hung in the back of the room peeked over her left shoulder. She even sat in a floral-patterned chair.

HippieCatholic’s TikToks reach Catholics who know the pain of loving tradition and desiring some changes.

Beane started HippieCatholic during college, but her approach didn’t solidify until a group of friends made anti-Catholic comments in her presence. Beane expressed that she was Catholic and that their words were offensive and rude. The group pushed back, flying through a list of (valid) Catholic atrocities: abuse, sex scandals, violent colonialization.

“There are good Catholics that are fighting those evils in the system,” Beane responded.

“Well then where are they?” her friends asked. “Why haven’t they done anything?”

Their questions challenged and changed Beane. Her mission on TikTok is “to start a conversation between the church, where the Eucharist resides, and the world, where the Holy Spirit moves.” Content includes everything from information on female Catholic saints (over 29,000 likes) and her HippieCatholic aesthetic (almost 12,000 likes), to the Catholic drama over fashion at the Met Gala. She even updates her followers on Catholic news and answers questions like “Do Catholics worship Mary?” My absolute favorite are the mini-adoration sessions—evangelism at its best.

“At first, I felt like I was screaming on top of a hill, ‘Can anybody hear me?’ Then people start coming out of the woods saying, ‘I hear you! Can you hear me?’And eventually, that becomes a roar.” Beane said.

HippieCatholic’s TikToks reach Catholics who know the pain of loving tradition and desiring some changes—the Catholics who look like heretics to those who cling to tradition but are too religious for those who are “simply” spiritual.

She likes the Latin Mass and understands why Pope Francis is concerned. She sometimes veils, and she’s a feminist. She adores traditional hymns (yes, that’s her actual voice) and supports those in the L.G.B.T. community. She’s treading a line most aren’t brave enough to walk: “I’m Catholic and progressive, and those things aren’t problems for each other. They can work together in very beautiful ways.”

Her frustration comes in when either side claims there is only one way of being Catholic and that it possesses the sole grip on truth. “Catholicism is a diverse global religion with [many] different ways of expression. And we do a disservice to a universal church by saying that if you don’t fit into this exact mold, you’re not really Catholic,” Beane said. “The truth goes where the truth goes. Sometimes it’s on one side, sometimes it’s on the other, and sometimes it is in the middle. But the truth is Christ, and you follow the truth and align with that truth and let that truth hold you accountable.”

Her mission on TikTok is “to start a conversation between the church, where the Eucharist resides, and the world, where the Holy Spirit moves.”

While many Catholics (especially young Catholics) leave the church out of frustration and hurt or double down and become “rad trads,” Beane boldly stations herself in the mess. Her content is proof that our tradition is strong enough to meet the current moment.

Don’t let the flowers fool you, either. This hippie calls it as she sees it, and no one is off the table for her respectful and sassy criticism—the Vatican, Pope Francis, rad trads, Joel Osteen, even Kaitlin Bennett.

She’s never cruel or rude. “I try to be sassy in a funny way and not a mean way,” Beane explains. “I feel bad if I ever hurt anybody’s feelings.” But for her, kindness doesn’t require silence. “We need to be able to call out nonsense when we see nonsense,” she continued. “When we see corruption or evil going on, we should call it out. But we should do it in a way that calls people in, a way that calls out action and not a person.”

So a young Catholic with a prophetic call for the church and a love for tradition gets a TikTok; what could go wrong? A lot. The internet is a breeding ground for hate, and Catholic content is no exception. Beane receives hate comments from both sides of the line.

In one of her most controversial (and favorite) TikToks, she reported on the possibility of women deacons. In response, a male Catholic creator made a video urging his followers to “ratio” Beane—that is, to flood her feed with negative responses. “He told his followers to go after me and write ‘Woman’ under my comments. He told them to write ‘Woman’ under any theological take that [they think] is bad.”

“That the word ‘woman’ is synonymous with bad theology, that’s what we’re dealing with,” Beane reflects. “All because I was reporting Catholic news that women deacons were in the works—possibly. All I did was report news.”

“How do you deal with all those hate comments?” I asked, mostly out of concern. She didn’t even need a second. “Ultimately, relying on God; Relying on adoration, going to Mass regularly and keeping my spiritual life has strengthened me…I can take it.”

She’s treading a line most aren’t brave enough to walk: “I’m Catholic and progressive, and those things aren’t problems for each other. They can work together in very beautiful ways.”

Beane believes in free speech and doesn’t want to partake in censorship. She believes in the importance of honesty, even when it can be upsetting. “In a sense, we need to see the damage, the problem, and what we have to work with,” Beane says. “Peacemaking is not peaceful.”

It astounds me that Beane can look to the extremes of Catholicism and think, Still my people. But if there’s one thing I take away from the HippieCatholic, it’s that many of our church-political distinctions are worthless. Adoration or the choice to veil is not inherently traditionalist, and inclusion is no more progressive than the Beatitudes. It’s all just Catholic. And insisting otherwise is only pushing people to deeper fringes and weakening our church. We should all learn a lesson from Beane and start dancing to our own tune. It may very well help others have the courage to do the same.