The war in Ukraine is exposing America’s crisis of democracy 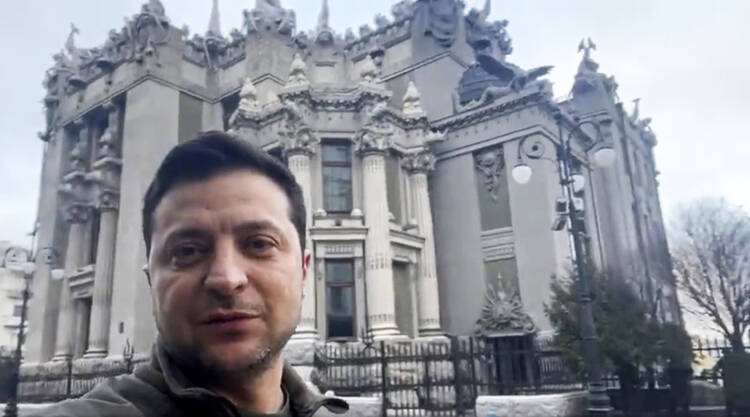 The Ukraine crisis transformed the 2022 State of the Union address and our politics with a startling show of near-unanimity whose type we see rarely. But we know it will be brief. The larger story of the Ukraine crisis in the United States is about our bitter politics, which seems to prize partisanship above security, above our institutions and processes of government…above everything.

One member of Congress, Rep. Marjorie Taylor Greene tweeted on Feb. 24 that “Everything happening to the poor people of Ukraine is a direct result of a WEAK America under the WEAK leadership of Joe Biden,” and Rep. Paul Gosar asserted the same day that “It is obvious the world thinks the Biden regime is incompetent and impotent.”

Americans saw the closing of the Cold War as an American victory: Democracy and the U.S. way of life had prevailed.

Partisanship is not new to U.S. politics. When the United States faced a potential world war at the Korean-Chinese border in 1950, President Harry Truman endured political attacks that included calls to “impeach the imbecile.” But there was still a sense of national purpose and a widespread belief that politics should “stop at the water’s edge” (in the phrase of Sen. Arthur Vandenberg, a contemporary of Truman and his critics).

Americans saw the closing of the Cold War as an American victory: Democracy and the U.S. way of life had prevailed. We believed that when the rest of the world closed their eyes, they imagined a political future that looks just like our political and social life.

But not everyone is imagining that. “The Bad Guys Are Winning,” Anne Applebaum warns in a recent piece for The Atlantic. She describes emerging authoritarian states around the globe, including Vladimir Putin’s Russia, and regrets that in the United States, “a part of the American left has abandoned the idea that ‘democracy’ belongs at the heart of U.S. foreign policy—not out of greed and cynicism but out of a loss of faith in democracy at home.” According to this analysis, the United States’ flagging enthusiasm for making the world safe for democracy has opened a lane for contemporary autocrats. And they are speeding forward.

Our flagging enthusiasm for making the world safe for democracy has opened a lane for contemporary autocrats. And they are speeding forward.

The United States should not abandon a foreign policy that promotes free self-determination around the globe. All the same, those skeptics Ms. Applebaum describes, people who have lost faith in democracy at home, may be on to something. After 20 years of war in Afghanistan, the United States would benefit from some humble soul-searching about a tendency to insist on re-making the world in our image. And even as the NATO powers defend a democratic ally in Ukraine and Volodymyr Zelenskyy emerges as a democratically elected hero, there are indications that at home the vitality of our democracy has diminished.

In Texas, Arizona and other states, more than 440 bills have been introduced since the last presidential election that would restrict access to voting for specifically-targeted groups. At the same time, partisanship has only made it more difficult for Congress to govern: For example, Joe Manchin, the Democratic senator from West Virginia, has been vilified for a lack of party loyalty because of his determination to listen to the people who voted for him.

U.S. political discourse has been infiltrated in recent years by Russian disinformation efforts that have taken advantage of already-existing social divisions to frustrate our politics with polarized paralysis intended to make democracy look weak. But it is too easy to blame outside interference. Loss of faith in democracy is all-American and homegrown.

It is too easy to blame outside interference. Loss of faith in democracy is all-American and homegrown.

In this moment of acute geopolitical danger, it is difficult to accept that our own commitment to democracy is shakier than many of us would like. Our flawed democratic commitments do not necessarily disqualify the United States as a global champion for democracy and peace, but they could mean that the authoritarian crisis abroad is not something Americans can point a finger at without first facing up to the political crisis at home.

Today, in 2022, the America First Political Action Committee cheers for the Russian president, and Fox News host Tucker Carlson parroted Mr. Putin when he described Ukraine last month as “a State Department client state.” Again, not a completely new phenomenon in the United States: In 1939, 20,000 Americans attended a Nazi rally at Madison Square Garden. Our body politic has consistently struggled to embrace the highest civic aspirations of our political ideals.

There are also challenges that are completely contemporary. The complexity of the mediascape and the technological tools used to spread dis- and misinformation create unprecedented hazards.

There is cause for optimism. Mr. Putin has failed to gain swift control over Ukraine, but he has succeeded in reminding the world that one nation’s autocracy can eventually become a global problem, and that the world gains much from the security provided by the United States and its allies in NATO.

Democracies overreach, and the United States certainly is no exception. But the rules-based international order created by democracies has brought more peace and stability than autocracies can promise. Mr. Putin’s attempt to obliterate Ukraine has made that impossible to deny. As depressing as the circumstances are, maybe that is good news. What is at stake at home and around the world has never been clearer.

Despite being an imperfect people, the value of seeking this “more perfect union” together should be something all of us can agree on.

[Related: It’s time for the bishops to speak up again about the threat of nuclear war]