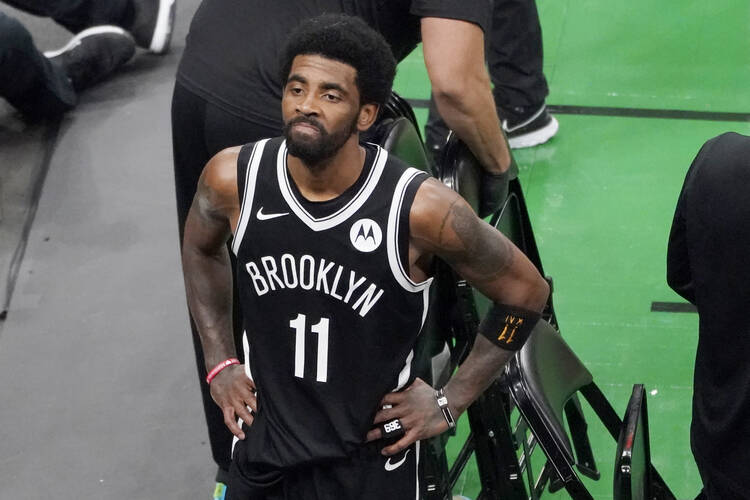 In one of the strangest stories of vaccine hesitancy to date, the Brooklyn Nets superstar point guard Kyrie Irving has not yet gotten the shot.

Unfortunately for Mr. Irving (and Nets fans), under the city’s current Covid-19 protocols, this also means that he is not allowed to practice or play at an athletic facility in New York City until he receives at least one dose of the vaccine. This development is particularly dramatic given that the Nets are widely considered the favorites to win this year’s N.B.A. championship. Furthermore, the team will not pay Mr. Irving for home games missed; he could forfeit upward of $15 million this season.

In one of the strangest stories of vaccine hesitancy to date, the Brooklyn Nets superstar point guard Kyrie Irving has not yet gotten the shot.

Mr. Irving took to social media on Wednesday to explain his decision. In a 20-minute Instagram live video, he both defended himself and tried to identify himself with others in similar situations. “I’m standing with all those that believe in what’s right,” he said. “Everybody is entitled to do what they feel is what’s best for themselves.

“You know, this is my life. I get to do whatever I want with this,” he said as he gestured at his body. “This is one body that I get here, and you’re telling me what to do with my body…. Nobody should be forced to do anything with their bodies.”

Frankly, the fact that he refuses to be vaccinated is not interesting. His argument is not novel. But I am intrigued by the fact that Mr. Irving wants to claim neutrality in the larger conversation around vaccines. He says in the video, for example, that “putting me as a hero or painting me as a villain, saying [I’m] going against vaccine mandates, that wasn’t my intent at all.” He also says that the decision is not a political one.

If that is the case, why has there been such extensive media coverage around the issue? Why are we not willing to buy his claim that he is just an innocent bystander, caught up in a narrative beyond his control?

Perhaps there is a media circus because of Mr. Irving’s status as one of the best basketball players in the world. But I also think that something important is happening with the style of his language, the mode of speaking that he adopts. The video is full of sweeping statements and bold proclamations. Re-read some of the phrases above: “Everybody is entitled”; “standing with all those who believe what’s right”; “this is my life”; “nobody should be forced.” These are strong assertions with little nuance and are meant to elicit a reaction, positive or negative.

This type of language is inherently not neutral.

The trademarks of the prophetic style are “assertion and proclamation,” according to Father O’Malley.

We can identify this type of language even more precisely. It is what the prominent church historian John O’Malley, S.J., calls a “prophetic” style of discourse. Without trying to oversimplify Father O’Malley’s analysis, prophetic discourse has been operative in society since the time of the Hebrew prophets and carried on most prominently by reform-minded figures (think of Martin Luther or Martin Luther King Jr.). The trademarks of the prophetic style are “assertion and proclamation,” according to Father O’Malley.

The prophetic is one of a few “cultures” that Father O’Malley sees running through Western civilization for the past few millennia. The “academic” culture is another, concerned with evidence and well-founded empirical arguments.

So what? Well, when it comes to a discussion of vaccines, or any contentious issue in today’s society, our style of speaking matters. How we speak determines what we can or cannot say. If we use proclamation and assertion to make our points, we may succeed at eliciting an emotional response from someone, but we are also requiring people to take sides on an issue and are not paving much of a path for dialogue.

Kyrie Irving had no chance to convince us that he was a neutral party in the vaccine debate because the style of his speech would not allow it.

Consider a scenario we have seen many times throughout this pandemic, in which the Centers for Disease Control and Prevention, acting upon some form of data and evidence, decides on mask regulations. We typically see two categories of criticism. First, those who make assertions against a perceived injustice: “Our kids are being forced to wear masks in schools. This is absurd!” Second, those who engage with the actual data: “The risk of Covid to school-age children is relatively low. This mandate is not supported by evidence.”

Which method is better? Neither; it depends on what you are trying to accomplish. There is, of course, a time and place for the prophetic, a time to denounce a perceived injustice and evoke an emotional response. There is also a much-needed place for evidence-based discussions of policies and procedures.

I worry, however, that our society is becoming overly reliant on the former. Social media has become a breeding ground for sweeping statements and bold claims. It pushes us toward this prophetic style of discourse with the promise of fame and followers for those who use it best. We adopt this style of speaking without realizing that style affects content. Form affects function. Kyrie Irving had no chance to convince us that he was a neutral party in the vaccine debate because the style of his speech would not allow it.

His example reminds us to be mindful of how we communicate and, as Christians in a divided country, to assess how our language is furthering or hindering the culture of authentic encounter to which Pope Francis has called us.