The year the Twin Towers fell, the Yankees lost the World Series—and God could do nothing about it. 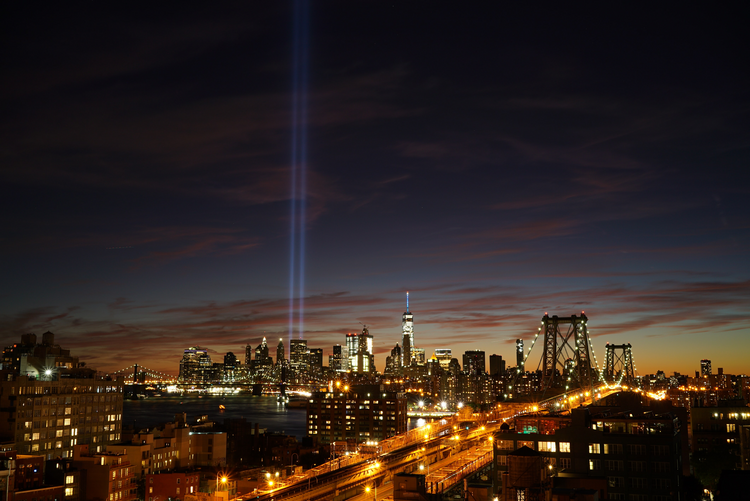 On Sept. 11, the two planes not only took down the World Trade Center, killed 2,977 people, crushed a city and launched two wars, they also knocked out the gigantic television antenna that rested on top of 1 World Trade Center, the North Tower. So if you lived in New York and did not have a cable hook up, the only station you could watch was WWOR. And WWOR did not show New York Yankees games.

Which meant that when the Yankees made it to the seventh game of the World Series against the Arizona Diamondbacks two months later, New Yorkers who only had regular TV could not watch the game at home. I was at a place that only had regular TV, so we listened to it on the radio. I was living on the Lower East Side of the city, acting, writing and considering a religious vocation. I wanted to join the Jesuits. I did not want to join the Jesuits. Almost every Jesuit I know has the same story. That night of game seven, I was at the apartment of a Green Party candidate for the New York City Council named Kwong Hui. He was running for office at an opportune time, when term limits were ending the careers of many long-time council members. The day of the attack was also New York’s original election day. I was handing out leaflets a hundred yards from a polling place and a noise boomed out like a truck going over a metal plate on a bridge. From the opposite ends of the sidewalk I shared a startled look with a leafleteer for my opponent, a mainstream Democrat whom I had regarded with distaste. And then a second, lesser boom and it all began.

A building giving up and sinking down on itself, black and gray smoke and dust and concrete collapsing, and it made you sick.

The election was cancelled. I went to my roof, one remaining tower standing, gashed, burning, and then, as if it was unable to take it anymore, seeming to just give up. A building giving up and sinking down on itself, black and gray smoke and dust and concrete collapsing, and it made you sick.

In the city, an acid shock, the posters and messages of peace scrawled all over a George Washington statue in Union Square, the ridiculously beautiful blue skies and perfect weather that went on all throughout that September. For weeks the air downtown was also sulfurous. Later, a man who had been a medic in Vietnam wrote that the smell was, in part, the odor of dead, rotting bodies.

Kwong and his core volunteers regrouped and turned the campaign into a relief effort for people, primarily in public housing in Chinatown and the lower east side, his would-be constituency.

In Kwong’s district, they were staggering from their businesses being shut down, their phones not working, the mental and emotional devastation. We knocked on doors, checked on elders, agitated to get air purifiers from FEMA.

The Yankees were suddenly winning late in game seven of the World Series two months after the city was attacked by terrorists in planes.

I followed the Yankees with half an eye, catching TV highlights through restaurant windows, a headline in a news stand. They fought their way past the Oakland A’s and then the Seattle Mariners and finally into the Series. In the meantime the election had been rescheduled and our relief work turned back into a campaign. When the World Series went to a seventh game, it took place on Sunday night November 4, two days before the election. We were sorting flyers and posters and listening to the game on the radio and it was tied and who knew where this was going. But then, in the top of the 8th inning, the young center fielder Alfonso Soriano hit a solo home run and the Yankees took a one-run lead. The Yankees were suddenly winning late in game seven of the World Series two months after the city was attacked by terrorists in planes. Two months after the devastation, the grief beyond what a surviving body seemed capable of bearing, the pain sent forth in waves over the entire region, those firemen sitting helplessly in front of their open red garages surrounded by flowers and candles and cards from school kids, the economy sunk, the air toxic, and the lesser evil of a just war, and wondering how much traction evil loses when it is simply “lesser” and Lin, the Taiwanese organizer from Queens with whom you have fallen into a half-hearted relationship, and we could go on about those days, couldn’t we, pages, books, theories, heroics, lights, shadows and shadows of shadows.

Nevertheless, coming on to end this madness for at least one night, to heal it for the space of a few champagne-soaked moments was the best pitcher in the known universe. It is the bottom of the ninth, and Mariano Rivera walks to the mound. And then things fall apart. The radio announcers tell us there is a hit. And there is another hit, this one back to the mound. And Rivera throws the ball into center field, and the runners are safe and things go on like this and suddenly the Diamondbacks have won the World Series and the Yankees have not. We turned off the radio. We finished folding the brochures. Everyone went home. I left with Lin. The Yankees had lost and the towers smoldered and two days later Kwong Hui, the sweatshop crusader, would lose, lose badly.

The sinking towers, hopeless election, grateful neighbors, heartbreaking Yankees, looming Jesuits, last sad romance, marvelous blue sky: 20 years later it is all of a piece. I could say something about God and resurrection and redemption and hope and the city coming together. But still, the sting and the fog of pain and sorrow 20 years later, helpless as planes crash, as wars arise, helpless as a team loses what by all rights they should have won.

The sting and the fog of pain and sorrow 20 years later, helpless as planes crash, as wars arise, helpless as a team loses what by all rights they should have won.

And that heartbreaking baseball defeat seeming to distill and crystallize all of it; pointing to something so bleak, sad and hopeless tucked into the fabric of everything. Everything is loss, suffering and pain. Sometimes people want to kill us, and sometimes they manage to do it. The good spirit threads in, through and around all of it, sure, but at the same time tossing the fire blanket of spirituality onto this epically sad time doesn’t seem to quite fit. Not even God can rewrite a box score.

But there is one more story.

Three days after the planes hit I went to my stage fencing class at an acting studio in Greenwich Village. At the end of class, the key student asked the two of us who showed up to raise our rapiers in the air, as we always did to close a session. As the three dull gray weapons went up, and touched points, she added a few words. Something like: “Even in a time like this we know that it is okay to do this, to carry on, and in its own way this art can be meaningful…it is important that we do this.”

Laymen’s military, citizen soldiers beholding September’s catastrophe, pausing before the insanity, and performing our own barely sane little theater ritual that we tried to tie into the larger insanity out there; raising fake swords in a tiled basement classroom and saying vaguely regal things and then going home.

It was weird and small and awkward and lovely and perfect.

Joe Hoover is America’s poetry editor. This essay has been adapted from his book, O Death, Where is Thy Sting? A Meditation on Suffering.