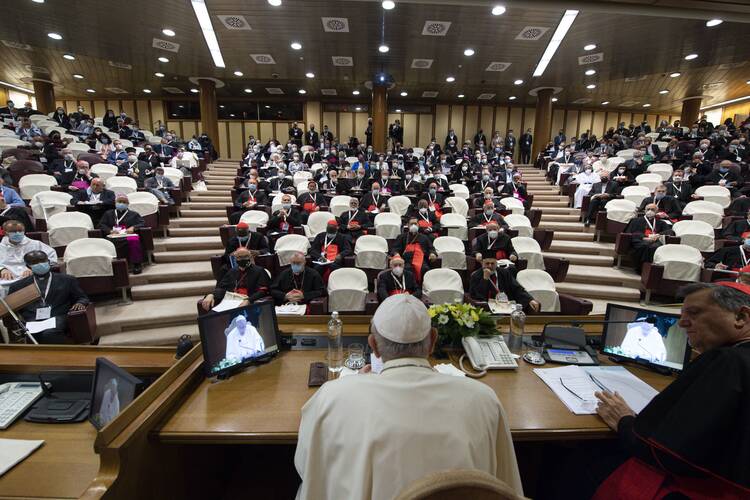 “There is no need to create another church, but to create a different church,” Pope Francis said—quoting the words of Yves Congar O.P., one of the great theologians of the Second Vatican Council—in his talk to a gathering of more than 200 cardinals, bishops, clergy, religious and laity from all over the world.

They had come together on Oct. 9, wearing masks, in the Vatican synod hall for “a day of reflection” organized by the synod secretariat, headed by Cardinal Mario Grech of Malta, prior to the formal opening of the two-year-long synod on synodality by Pope Francis at Mass in St. Peter’s Basilica tomorrow, Oct. 10.

The synod is intended to involve all the baptized—bishops, clergy, religious and laity—at the diocesan and continental levels, and will conclude with a plenary assembly of bishops at the Vatican in October of 2023.

This is Francis’ fourth synod—after the synods on the family, youth and Amazonia—but is perhaps the most important of all as he envisages it as the path to a profound renewal and transformation of the Catholic Church worldwide, through the participation of all the baptized. He explained this in his talk this morning, which drew warm applause from those present when he finished speaking, and which Cardinal Grech declared, “offers direction” to the whole synodal process.

“I am certain the Spirit will guide us and give us the grace to move forward together.”

Speaking in Italian and seated between Cardinal Grech and the Jesuit Cardinal Jean-Claude Hollerich of Luxembourg, whom he appointed to the key post of general relator (rapporteur) of the synod, Francis thanked the participants who had come from many churches worldwide. He told them, “I am certain the Spirit will guide us and give us the grace to move forward together, to listen to one another and to embark on a discernment of the times in which we are living, in solidarity with the struggles and aspirations of all humanity.”

Departing from his prepared text, he emphasized that the synod is “not a parliament nor a survey of opinions,” rather it is, “an ecclesial moment whose protagonist is the Holy Spirit.” He insisted, “Without the Spirit, there is no synod.”

He prayed that it would bring unity in the church. Quoting St. Cyprian, he said, “We must maintain and firmly uphold this unity, above all among ourselves, the bishops who preside in the church, in order to demonstrate that the episcopate is itself one and undivided.”

He said the synod has three key words: “communion, participation and mission.” He recalled that the Second Vatican Council “taught that ‘communion’ expresses the very nature of the church, while pointing out that the church has received ‘the mission’ of proclaiming and establishing among all peoples the kingdom of Christ and of God, and is, on earth, the seed and beginning of that kingdom.”

He recalled that St. Paul VI, who guided the council’s last three sessions, explained that communion entails “cohesion and interior fullness, in grace, truth and collaboration,” while mission means “apostolic commitment to the world of today.”

Communion entails “cohesion and interior fullness, in grace, truth and collaboration,” while mission means “apostolic commitment to the world of today.”

St. John Paul II, he noted, concluded the 1985 synod that marked the 20th anniversary of the council’s closure, reiterating “that the church’s nature is koinonia, which gives rise to her mission of serving as a sign of the human family’s intimate union with God.” He said the Polish pope emphasized that for synods to be fruitful, “it is necessary that the local churches work at their preparation with the participation of all.”

Pope Francis reaffirmed this vital need for “participation” and said, communion and mission risk remaining somewhat abstract “unless we cultivate an ecclesial praxis that expresses the concreteness of synodality at every step of our journey and activity, encouraging real involvement on the part of each and all.”

He reminded everyone that “participation is a requirement of the faith received in baptism” and said, “in the church, everything starts with baptism. Baptism, the source of our life, gives rise to the equal dignity of the children of God, albeit in the diversity of ministries and charisms. Consequently, all the baptized are called to take part in the church’s life and mission.”

While acknowledging that progress regarding participation has been made in many dioceses, Francis also stated frankly, “we must acknowledge the frustration and impatience felt by many pastoral workers, members of diocesan and parish consultative bodies and women, who frequently remain on the fringes.” He reminded bishops and priests, “Enabling everyone to participate is an essential ecclesial duty!”

He said the synod offers “a great opportunity for a pastoral conversion in terms of mission and ecumenism” but “it is not exempt from certain risks.” He mentioned three risks: formalism, intellectualism and complacency.

Referring to formalism, he said, “the synod could be reduced to an extraordinary event, but only externally; that would be like admiring the magnificent facade of a church without ever actually stepping inside.” Instead, the synod is meant to be “a process of authentic spiritual discernment that we undertake, not to project a good image of ourselves, but to cooperate more effectively with the work of God in history.”

“We must acknowledge the frustration and impatience felt by many pastoral workers, members of diocesan and parish consultative bodies and women, who frequently remain on the fringes.”

Francis spoke to an audience that included the officials of the Roman Curia, including retired office holders and bishops from across the world, among them Archbishop José Gomez, president of the U.S. Conference of Catholic Bishops, and seven others from the United States.

“If we want a synodal church,” he said, “we cannot remain satisfied with appearances alone; we need content, means and structures that can facilitate dialogue and interaction within the People of God, especially between priests and laity.” He emphasized this, he said, because “sometimes there is an elitism among priests and bishops that causes them to separate themselves from the laity.”

He insisted that the synodal church “requires changing certain overly vertical, distorted and partial visions of the church, the priestly ministry, the role of the laity, ecclesial responsibilities, roles of governance and so forth.”

Identifying the second risk as intellectualism, Francis said the synod “could turn into a kind of study group, offering learned but abstract approaches to the problems of the church and the evils in our world. The usual people saying the usual things, without great depth or spiritual insight, and ending up along familiar and unfruitful ideological and partisan divides, far removed from the reality of the holy People of God and the concrete life of communities around the world.”

He identified the third risk as “the temptation of complacency, the attitude that says: ‘We have always done it this way’ and it is better not to change.” This is a poison in the life of the church, he said, adding that “those who think this way, perhaps without even realizing it, make the mistake of not taking seriously the times in which we are living. The danger, in the end, is to apply old solutions to new problems.”

“Let us experience this moment of encounter, listening and reflection as a season of grace that, in the joy of the Gospel, allows us to recognize at least three opportunities.”

Pope Francis said it is “important that the synodal process be a process of becoming, a process that involves the local churches, in different phases and from the bottom up, in an exciting and engaging effort that can forge a style of communion and participation directed to mission.”

He invited everyone, starting with bishops, “let us experience this moment of encounter, listening and reflection as a season of grace that, in the joy of the Gospel, allows us to recognize at least three opportunities.”

He said the first opportunity calls us “to move structurally towards a synodal church,” that is to “an open square where all can feel at home and participate.” The second asks us “to become a listening church,” that is “to break out of our routine and pause from our pastoral concerns in order to stop and listen. To listen to the Spirit in adoration and prayer, to listen to our brothers and sisters speak of their hopes and of the crises of faith present in different parts of the world, of the need for a renewed pastoral life and of the signals we are receiving from those on the ground.”

The third opportunity, he said, calls us “to become a church of closeness, that not only in words, but by her very presence weaves greater bonds of friendship with society and the world. A church that does not stand aloof from life, but immerses herself in today’s problems and needs, bandaging wounds and healing broken hearts with the balm of God.”

Francis prayed that this synod “may be a true season of the Spirit!” He told his audience, “The Holy Spirit guides us where God wants us to be, not to where our own ideas and personal tastes would lead us.” At this point he recalled that Father Congar once said: “There is no need to create another church, but to create a different church.”

He concluded with this prayer: “Come, Holy Spirit! You inspire new tongues and place words of life on our lips: keep us from becoming a ‘museum church,’ beautiful but mute, with much past and little future. Come among us, so that in this synodal experience we will not lose our enthusiasm, dilute the power of prophecy, or descend into useless and unproductive discussions.”

Pope Francis will open the synod with a concelebrated Mass in St. Peter’s Basilica Oct. 10, and each bishop is expected to open the synod in his diocese this month also, thereby opening the path to what could mark the beginning of a great renewal of the life of the church.