During a prime time broadcast that was syndicated across numerous major TV and radio networks in the UK, viewers were told, “There’s no chip or tracker in the vaccine.” 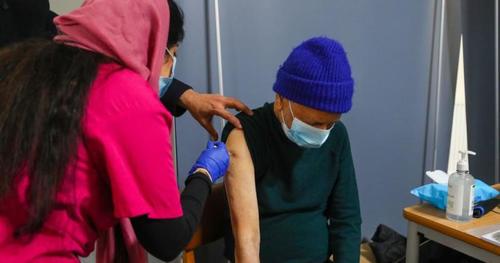 The advert went out just before 10pm last night and appeared on all the major networks, including BBC, Sky, Channel 4, ITV and LBC.

It featured numerous ‘BAME’ celebrities urging people to get the COVID-19 vaccine in order to be allowed to see their friends and family again.

“We will be reunited with our friends and family – all we have to do is take the vaccine,” said one woman to camera.

LBC has united with other broadcasters to urge ethnic minority communities to #TakeTheVaccine. pic.twitter.com/7AAcdvqKJY

Viewers were told that the vaccine doesn’t include pork, fetal matter and is entirely safe.

“There is no chip or tracker in the vaccine to keep watching where you go, your mobile phone actually does a much better job at that,” said one of the participants.

Studies show that non-white populations are less likely to get the vaccine because such communities have a greater suspicion towards the procedure.

The idea that people will have to take the vaccine before they are allowed to return to normal life is an interesting line of reasoning given that the government has assured people it will not be mandatory.

However, as we highlighted yesterday, domestic vaccine passports that would allow only those who have taken the jab to enter stadiums, cinemas and even bars are still being considered.

New limited edition merch now available! Click here. In the age of mass Silicon Valley censorship It is crucial that we stay in touch. I need you to sign up for my free newsletter here. Support my sponsor – Turbo Force – a supercharged boost of clean energy without the comedown. Also, I urgently need your financial support here.