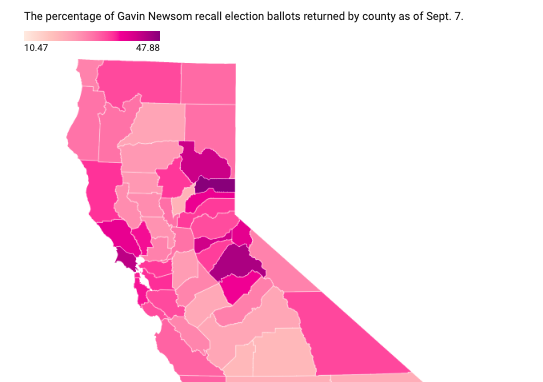 Over 6 million ballots have been accepted by election officials in the Gavin Newsom recall, the rapidly approaching Sept. 14 contest where every registered voter was mailed a ballot.

According to figures from the California Secretary of State’s Office dated Sept. 7, across the entire state a total of 22,357,300 ballots have been distributed to voters and 6,330,575 have been returned, good for 28.3% turnout.

The secretary of state provides a county-by-county breakdown of where ballots have been submitted, visualized in the map below. Included are each county’s turnout figures to this point, as well as the margins of the 2020 presidential election and 2018 gubernatorial election for reference.

Sierra County, which has favored Republican candidates by more than 20 percentage points in the last two statewide elections, has the highest turnout so far with 47.9% of ballots returned. The county with the lowest turnout is Imperial County (10.5% of ballots returned), a typically blue county where over 80% of residents are Latino.

Low Latino turnout has been one of the major storylines in the recall election so far, and in all three California counties where Latinos make up more than 56% of the population — San Benito, Tulare and Imperial — voter turnout is below the statewide figure of 28.3%.

Every county in the highly Democratic San Francisco Bay Area exceeds the statewide 28.3% figure with the exception of Solano County, which has a returned ballot rate so far of 27.8%.

In the COVID-19 era, Democrats have been more likely to vote by mail while Republicans are likelier to vote in person on Election Day, and this pattern seems to be borne out a bit by the Bay Area’s high returned ballot rate contrasted with the Central Valley’s low rate. Kern County, which was the most highly populated California county to vote for Trump in 2020, has a paltry 21.1% return to this point. That’s suggestive of an upcoming large election day turnout from pro-recall voters.

The exact size of that Election Day turnout and the question of whether Democrats can engage more voters in the campaign’s final days will determine Newsom’s fate.