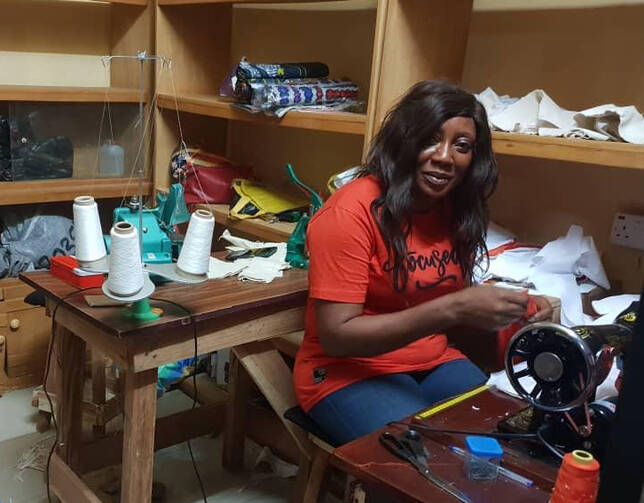 Chisom Eze grew up in a polygamous home in Enugu State in southeast Nigeria, where close family relationships were difficult to maintain. When tensions escalated within the family, her stepbrothers accused her of stealing and other petty crimes. They called local police and had her arrested. She was three months pregnant when she was brought before the magistrate court for theft, then remanded to prison in May 2016.

Four months after her arrest, a team led by the Ambrose Ekeroku, O.C.D., from Carmelite Prisoners’ Interest Organization, or Capio, a nonprofit committed to improving the welfare of inmates in Nigeria, visited the prison where Ms. Eze was detained. The group from Capio celebrated Mass, distributed food among the inmates and began seeking out the prisoners who have been jailed without being convicted of anything. Almost 75 percent of Nigeria’s total prison population are being held behind bars simply awaiting trials. In the worst cases, defendants can wait as long as seven years in prison before their trials begin.

Without Capio, “I would still be suffering in the prison because I had no money to hire the services of a lawyer,” Chisom Eze said. “I had thought my life would end in prison until Capio saved me.”

Fortunately, Ms. Eze, 25, did not have to remain too long in her overcrowded prison cell. Capio’s legal team intervened and brought her case quickly before the high court in Ogute, in Enugu. Her trial was postponed three times, but when her stepbrothers failed to appear in court to share evidence against her, she was acquitted and discharged in November 2016, the same month she delivered a baby boy, David.

Without Capio, “I would still be suffering in the prison because I had no money to hire the services of a lawyer,” Ms. Eze, who separated from her husband in 2017, said. “I had thought my life would end in prison until Capio saved me.”

But after her release, Ms. Eze only faced greater challenges. Among them was restoring herself to society. In Nigeria, rejection and stigmatization typically push ex-convicts back into crime.

Criminal recidivism around the world, even in economically affluent nations, is stubbornly high at about 50 percent. According to one study, between 20 and 63 percent of ex-convicts, depending on the country in question, relapse into criminal behavior within two years of their release from prison. Nigeria has experienced a persistent rise in recidivism—from 35 percent in 2007 to 50 percent in 2019. Its exploding prison population and lack of resources to pay for rehabilitation programs has not helped matters.

In August 2019, President Muhammadu Buhari signed the Nigerian Correctional Service Act into law. Its Section 14 outlines expectations on the reformation and rehabilitation of inmates, ordering that inmates should receive education and vocational training while in correctional centers. But implementation of Section 14 has been slow because of government funding shortfalls.

Things changed for Ms. Eze after her release in January 2017 when Capio’s welfare team contacted her to find out what trade or business interested her. No one in her family was willing to support her, but Capio provided financial and material support for her to start a business in preparing okpa—a common delicacy in southeastern Nigeria prepared with bambara beans—to sell in her state’s capital city, also called Enugu.

Capio rented an apartment for her and her son in Enugu and provided a gas cylinder “and all the material I needed to start the business,” she remembered. “From the business, I make at least 5,000 naira [$12.03] daily,” she told America. “Capio changed my life completely and did not allow me to experience any hardship that will lead me to [commit] crime. I can’t thank them enough.”

Today, Ms. Eze is among over 20 ex-inmates in Enugu that Capio has empowered with skills and start-up resources to help them reintegrate into society.

Started by Discalced Carmelite friars in Enugu State and formally launched in August 1992, Capio has been pushing for criminal justice reform in Nigeria while it attends to the practical and material needs of inmates.

When Capio launched, it initially focused on advocating for the rights of inmates. But after noticing the steep increase in crime among ex-convicts, the group decided to add a rehabilitation program to its services.

“We observed that most inmates in the custodial centers come out worse,” the Jude Isiguzo, O.C.D., Capio’s executive director, said. “This has greatly contributed to the high rate of recidivism [mainly] because there is a dearth of rehabilitation activities across custodial centers in Nigeria.

Negative perceptions about ex-convicts make it difficult for Capio to attract partnership sponsorship and support from individuals and organizations.

“Even when inmates are released from custodial centers, the process of proper reintegration to support them is not there. This gap informed Capio’s rehabilitation services.”

Under its four main areas of interest in support of prison inmates—legal, medical, social welfare and rehabilitation—Capio has improved the quality of life and outcomes for prisoners released from Nigerian correctional centers.

Capio’s legal team regularly visits the four correctional centers in Enugu and other jails across the country to provide free legal services to inmates, especially those who cannot afford to hire their own attorneys. With four in-house lawyers and the help of volunteer lawyers, Capio has provided legal support for over 100 inmates.

Each time Capio secures the release of inmates, it helps them reunite with their families and also helps them start up a small business or to learn a trade.

“After learning about tailoring, Capio provided machines and rented a shop for me to start my business in Abuja,” Lucy Dangana, a former prisoner, said. “Today, I am doing great.”

Every Tuesday, Capio’s welfare team visits correctional centers in southeast Nigeria and other parts of the country to provide welfare packages to inmates that includes essential materials like mattresses, toiletries, sanitary wares, food and clothing.

Capio donates medications and clinical equipment and provides free treatment to inmates. With the help of medical volunteers, Capio has assisted over 100 inmates during each visit.

On Sundays and some days during the week, Capio celebrates Mass in the prisons and counsels inmates. “We do this to attend to their spiritual needs,” Father Isiguzo said.

During the outreach, Capio donates medications and clinical equipment, and provides free treatment to inmates. With the help of medical volunteers—including professors and consultants of medicine, pharmacists, nurses and medical recorders—Capio has assisted over 100 inmates during each visit.

Capio conducts outreach efforts in secondary schools in Enugu to instruct young people on fundamental human rights and to discourage them from getting involved with crime.

Despite its successes, lean financial resources have frustrated Capio’s ambitions to help more inmates start up small businesses or receive skills training. Negative perceptions about ex-convicts make it difficult for Capio to attract partnership sponsorship and support from individuals and organizations.

“Not many donor agencies are interested in committing their funds to the prison sector,” Father Isiguzo explained. He has learned through his work that many of the incarcerated people have never been convicted of crimes, and even those who may be guilty of offenses are passionate about changing their lives. But the general public still regards “inmates as criminals that should be punished,” he said. “So donors prefer channeling their funds to other causes they feel benefits the society.”

But Father Isiguzo is still encouraged. He said Capio is building a home called the Center of Hope, where ex-convicts will receive livelihood and vocational training. Meanwhile, support from organizations such as Oxfam Novib, Misean Cara, the Episcopal Conference of the Catholic Bishops of Italy and Irish Aid, has helped Capio extend its projects to over nine correctional centers across the country. With 14 in-house staff and dozens of volunteers, the nonprofit has continued to rebuild the lives of ex-convicts.

Ms. Eze is glad her 4-year-old son has started school. She wants him to be a lawyer.

“I want to train my son to be a barrister and help people just like Capio helped me,” she said.