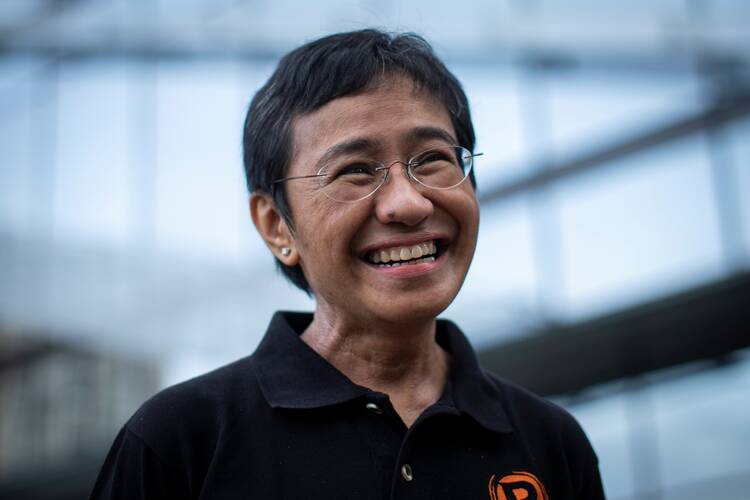 Maria Ressa and Rappler are made for each other. It is hard to imagine Rappler without the inspired leadership that Ms. Ressa, a joint recipient of this year’s Nobel Peace Prize, brings to this pioneering news website in the Philippines. It is equally difficult to fathom how Ms. Ressa could sustain her courage as she confronts, daily, the powers that be if she did not have the constant support of her young, committed and dynamic team.

“What makes Maria such a compelling leader is her energy,” said Marguerite de Leon, editor of Rappler’s opinion section. “Pre-pandemic, she would literally run around the newsroom, talking a mile a minute, popping her head in here and there to say ‘Hi’ and give some reminders and encouragement.” This brand of dedicated, hands-on leadership, “helps make everyone feel that they have a solid stake in the company,” Ms. de Leon said, “that Rappler is each and everyone of us and not just Maria.”

‘Rappler is each and everyone of us and not just Maria,’ said Marguerite de Leon, editor of Rappler’s opinion section

Brave women are changing the conversation

The Nobel Peace Prize, awarded this year to two journalists leading embattled press outfits at great personal sacrifice, witnesses the heroism of principled media practitioners around the globe who deliver fact-based news from the frontlines of social unrest often provoked by corrupt governments or despotic regimes. Sharing the prestigious honor with Ms. Ressa is Dmitry Muratov, who founded Novaya Gazeta, an independent Russian newspaper, and has served as its editor-in-chief for 24 years.

The Norwegian Nobel committee said, in its statement announcing the prize, it decided to award the Nobel Peace Prize jointly to Ms. Ressa and Dmitry Muratov “for their efforts to safeguard freedom of expression, which is a precondition for democracy and lasting peace.” Both journalists, the committee added, are “representatives of all journalists who stand up for this ideal in a world in which democracy and freedom of the press face increasingly adverse conditions.”

Despite working under constant duress and harassment—defending against criminal charges ranging from cyber libel to tax evasion, the former leading to Ms. Ressa’s arrest in 2019—Ms. Ressa has demonstrated the capacity to confront the presidential palace by the Pasig River and its army of paid trolls, and she has impressed and inspired a new generation of young media practitioners.

Early in Rodrigo Duterte’s tenure as president of the Philippines, Rappler’s intrepid investigative reports uncovered Facebook’s inability to check online abuse and disinformation meant to bring down the opponents of his regime and others who dared dissent.

Ms. Ressa has demonstrated the capacity to confront the presidential palace by the Pasig River and its army of paid trolls.

Afterward Rappler plowed on, remaining true to its investigative character—despite incessant intimidation from Mr. Duterte and sexualized threats from his allies that threatened the safety of its staff—by demonstrating the link between Mr. Duterte’s propaganda machine and the “troll armies” that manipulated the media and disseminated disinformation to influence and shape the mindset of netizens.

This year’s Peace Prize is also a testament to brave women—not only in the Philippines—who are changing the conversation, confronting the dumbing down of politics, and pushing back against the naysayers and those who employ social media to distort the truth and undermine the trust of citizens.

In mid-June 2016, soon after he assumed power, Mr. Duterte remarked that murdered journalists “deserved what they got” and had it coming to them because “they were corrupt.” His off-the-cuff remark—to which I publicly responded to in an article I wrote at the time, and of which there are countless other examples—appeared to give citizens, especially those in authority, permission to commit acts of hostility against media personnel who were exceptional in the practice of their craft, particularly in a country that was exceedingly dangerous for journalists who took their profession seriously. Since that statement, 19 media practitioners have lost their lives. And that’s not counting other human rights defenders, lawyers and judges who took a stand for truth and were felled by bullets in broad daylight.

This year’s Peace Prize is a testament to brave women who are changing the conversation, confronting the dumbing down of politics.

Ressa and Rappler: The country’s staunchest defenders of ‘democratic space’

I first met Maria Ressa in 1989 when she was a young reporter for CNN in the Philippines. Her interview of me took place in a most inauspicious time, as the country faced a hostile takeover attempt by disgruntled military officers who wanted to forcibly remove then-President Cory Aquino from power.

I was one of the organizers of KILOS (an acronym that meant “act”), a citizens’ movement formed to fight against the coup d’etat. Ms. Ressa interviewed me at my home just outside the campus of Ateneo de Manila University, run by the Jesuits. Ms. Ressa wondered aloud if this was the first country in the world where “coup d’etats are publicly announced and publicly postponed.” With her quick questions and an incisive mind, she proved a formidable interviewer even in the midst of such great tensions.

Later, as a CNN investigative reporter based in Indonesia, Ms. Ressa filed outstanding reports on terrorism in Southeast Asia when the region became a hotbed for agitation and radicalization, and communities that felt themselves marginalized, even ostracized, from mainstream society sought ways to express their frustrations and anger.

With her quick questions and an incisive mind, Maria Ressa proved a formidable interviewer even in the midst of such great tensions.

In 2012, Ms. Ressa founded Rappler, now one of the country’s staunchest defenders of democratic space.

In a country with a history of fearless journalism—dating to the Marcos regime’s martial law period that began in the early 1970s—Rappler has touched a vital nerve in the country’s capacity for defiance, and it has demonstrated an ability to reimagine ways of maintaining its relevance.

Before the Anti-Terrorism Act came into effect last July, Ms. Ressa—along with other media practitioners, religious leaders, educators, students and framers of the 1987 Constitution—submitted appeals to the Supreme Court, pushing back against yet another instrument that paved the way for arbitrary arrests and the climate of intimidation that such laws’ chilling effect brought. We stood against the weaponization of the law, and argued that the letter and spirit of the Bill of Rights of the 1987 Constitution were violated.

In 2012, Ms. Ressa founded Rappler, now one of the country’s staunchest defenders of democratic space.

On the day the Nobel Peace Prize was announced, I had just copied Ms. Ressa on a piece I was submitting to Rappler questioning the audacity of Ferdinand Marcos Jr., the late dictator’s son popularly known as “Bongbong,” filing his certificate of candidacy for president of the republic in the next year’s elections. It was as if time stood still. There he was, another Marcos on the political horizon without any remorse or acknowledgment for the atrocities committed and the countless lives destroyed during his father’s dictatorship, without any attempt to restore ill-gotten wealth. In fact, it is an affront twice over. Funds plundered from the people are now being used by Marcos as a candidate to “rebrand” the failed dictator’s legacy and revise history.

Ms. Ressa and Rappler continue to provide the space to resist the politics of lies and division, of untruth spread, in her own words, “by a thousand cuts.”

Ms. Ressa and Rappler continue to provide the space to resist the politics of lies and division, of untruth spread, in her own words, by a ‘thousand cuts.’

“We are fighting for facts,” Ms. Ressa said in an interview on Oct. 8. “When the world’s largest distributor of news [referring to Facebook] prioritizes the spread of lies, laced with anger and hate, and spreads it faster and further than facts, then journalism becomes activism.”

Indeed, “we live in a new era of shamelessness,” as Amal Clooney, Ms. Ressa’s lawyer, said in a CNN interview, where a Washington Post writer can be killed and dismembered through government complicity and a Belarusian journalist can be “hijacked from a plane” in mid-flight to be arrested by authorities. It is in this context that this year’s recipients of the Peace Prize are a welcome respite and refuge against authoritarian regimes.

What the Norwegian Nobel Peace Prize Committee honored in choosing Maria Ressa and Dmitry Muratov as this year’s Peace Prize laureates are the many journalists in different parts of the world who have stood fast against constant threats, to write their stories as they see fit without fear or favor.

Indeed—as leaders of the country’s historic “parliament of the streets” put it— “in the line of fire is the place of honor.”