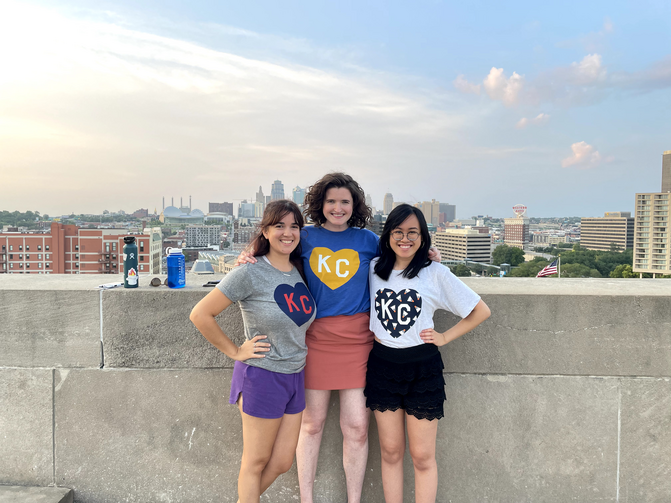 As a summer intern for America Media, plenty of unflattering news about the Catholic Church passed across my desk. Bishops quarreled over eucharistic coherence; the bodies of hundreds of Indigenous children were uncovered at the sites of Catholic residential schools in Canada; a cardinal was sent to trial for misuse of Vatican funds.

While I read these stories, I wondered, why choose to stay in a flawed church? Is it worth it?

To fight off the despair, I contemplated the people that do make it worth it: Catholics who commit themselves to bettering both the church and living in service of others.

To fight off the despair, I contemplated the people that do make it worth it: Catholics who commit themselves to bettering both the church and living in service of others.

Enter the Jesuit Volunteer Corps. In August 2020, J.V.C. sent 100 recent college graduates into communities across the world for a year or two to serve the poor and live in community. To my surprise, 77 of them were women.

I spent three days with three 23-year-old volunteers in Kansas City during the second to last week of their service year to understand why they joined J.V.C., how the year shaped them and what role their Catholic faith played in their lives.

Listen to their stories on the latest episode of the “Church Meets World” podcast here:

What makes young women commit to a year of Jesuit values?

Veronica Lugtu quickly wove through the narrow hallways of KC Care Health Center in dark blue scrubs and white sneakers. She cheerfully explained all the bodily fluids she monitored for inconsistencies that might reveal illnesses.

Blood in stool samples, for example, is an indication of colon cancer. This test is especially helpful for uninsured patients who cannot afford colonoscopies.

In a children’s office painted with colorful spots, the medical assistant explained her motivation behind volunteering.

“That’s what community is. That’s what alleviating suffering means,” she said. “You know, you hear about other people suffering, you accept the burden of it and do something about it. We have to work together more than ever before.”

“You know, you hear about other people suffering, you accept the burden of it and do something about it. We have to work together more than ever before.”

Lugtu’s faith is palpable. She regularly attends eucharistic adoration. She owns socks with St. Ignatius on them. She runs an Instagram page called @churchtours where she documents the churches she visits.

“What really makes a church beautiful is when you find God in this space that you’re in because he invites us, you know, into our relationship with him,” she said about her devotion to the buildings. “So, when you meet him, I think that’s the most beautiful part of being in a church.”

For Emma Chabolla, one of Lugtu’s roommates, the path to J.V.C. was less centered around the Catholic faith.

Identifying as bisexual and experiencing a suicide in her family led Emma to mostly write off her Catholic upbringing during high school. But her connections to J.V.C. made the choice to volunteer easy. Chabolla’s father serves as the organization’s president.

If it wasn’t faith that motivated her, what did?

“Honestly, most of the time it’s anger at the system. If you have the means to help people and you have a passion for [working against] something unjust, then that’s your job to try and help fix it,” she said. “A lot of this country is built on individualism, and that’s really good for a lot of things, but I think, especially in the pandemic, we’ve realized how important community and collectivism and being there for each other is.”

“Especially in the pandemic, we’ve realized how important community and collectivism and being there for each other is.”

Chabolla volunteered at the prison re-entry program Journey to New Life, located in an airy office in Missouri with brick walls and wooden floors. When a man with grey hair and loose clothes entered the glass front door, Chabolla’s co-workers brought him a shoebox from the back. He removed a pair of large steel-toed boots, unlaced his own and left them.

Across the state border in Kansas, their housemate Amy Lepp excitedly discussed binders, sharpies and coupons with her coworker Sister Sharon Hamsa while stocking the Donnelly College Campus Cupboard for the upcoming school year.

Lepp, an academic support specialist, helped students with their writing over the year and organized other tutoring programs.

She was inspired to join J.V.C. after watching the protests over George Floyd’s murder from the comfort of her home in Washington.

Lepp was inspired to join J.V.C. after watching the protests over George Floyd’s murder from the comfort of her home in Washington.

“It was sobering to witness these very big events from the comfort of home. I am from an affluent suburb of Seattle. It’s literally an island, so kind of like it’s my ivory tower,” Lepp said. “To be witnessing mass protests all over the world, online, in a pandemic at home—that was yet another confirmation that I had to get out of there.”

For the Marquette graduate, life as a J.V. certainly looked different from home. She shared a quaint house full of hand-me-down furniture, a rusty 2007 Toyota Corolla and all her meals with fellow J.V.s.

The trials of a service year

In the winter, Lugtu was making $1.60 an hour getting patients set up in their rooms, taking their vitals and assisting physicians with E.K.G.s and rapid H.I.V. and S.T.D. testing. The stress of work began to weigh on her spiritual life.

“I remember going through a period of desolation myself. I pretty much stopped prayer altogether,” Lugtu said. “I remember Emma told me that she started praying for one of her clients, and I was like, ‘Emma is praying more than me?’”

The grocery budget, $90 per month per person, particularly impacted Lepp because during college, she developed a gluten and dairy allergy. Because of this, she wrestled with disordered eating habits until her hair fell out.

Lugtu was making $1.60 an hour getting patients set up in their rooms, taking their vitals and assisting physicians with E.K.G.s and rapid H.I.V. and S.T.D. testing.

“I was so angry at my body for not letting me eat the things that I wanted it to, that I was used to eating…. I felt so out of place, not just in my own mind but also in my own body,” she said.

By the time she joined J.V.C., she had been eating an expensive but necessary diet of meats, fish and produce for a year and a half. But upon entering the organization, she ignored her allergies to adhere to J.V.C.’s value of simple living.

When she became sick again two months in, she asked J.V.C. for more grocery money to buy paleo options for their house. Sticking to the organization’s commitment to living in solidarity with the poor, they declined.

At first, her roommates made gluten and dairy free meals on the side for Lepp.

But eventually, their meals started to change altogether. In the spring, one of Lepp’s roommates lamented that she missed pasta. Lepp realized then that the whole house had stopped eating gluten and dairy.

“That was the radical inclusion—that there was no extra thing that was required for me,” she said. “Even with simple living and a very modest budget, they pretty much went paleo with me for a year, and they treated me and my body with more kindness and respect than I treat myself. And that’s been a lesson of love and compassion that has literally been hard to swallow.”

“They treated me and my body with more kindness and respect than I treat myself.”

At KC Care Health Center, a patient reminded Lugtu of God’s presence during her period of desolation.

While rooming a patient with a long list of conditions and disabilities, she felt defeated and discouraged. The patient looked up at Lugtu and said, “But what keeps me going is church.”

That got Lugtu, the church-collector, to finally attend Mass and eucharistic adoration again.

Chabolla, whose dedication to social justice inspired her path to J.V.C., noticed the small ways that God showed up for her throughout the year.

Her clients, newly released from prison, put all of their faith in God. They could be sleeping in their car, she said, and always spoke of God’s plan.

“[God] pushed so many people into my life. I made so many connections with people that I wouldn’t have otherwise. I’ve made friends for life.”

And her conversations about faith in the J.V. house inspired a different outlook.

“I was mad at God after my cousin died. And I felt the furthest from God I’d ever felt, but I realized this year that God wasn’t abandoning me,” she said. “He pushed so many people into my life. I made so many connections with people that I wouldn’t have otherwise. I’ve made friends for life.”

I started this reporting trip with an ambitious goal. I felt beaten down by giant global tragedies and longing for meaning, which turned out wasn’t far from what motivated these women to join J.V.C. I was hoping they could show me that the Catholic Church is worth the trouble and that young people can impact social change amid all the grief and pain we have witnessed in the past year.

The clearest thing I saw was the deep impact the J.V.s had on each other. The sacrifices they made for each other, however small, meaningfully changed each other’s lives. Being present to the people they served impacted them deeply.

The J.V.s reminded me of the power of doing small things with great love. With the immensity of the pandemic and worldwide protests, small things felt like they wouldn’t cut it. But things as small as dairy-free meals, listening to a patient describe their motivation and talking about God with friends are the acts of “radical inclusion” that help foster the big changes that we long to see.