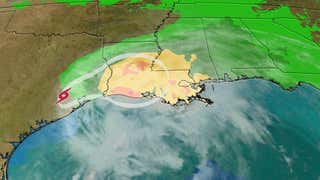 Tropical Storm Nicholas will spread its threat of flooding rain from southeast Texas into Louisiana and Mississippi the next couple of days after making landfall as a hurricane overnight.

Nicholas made landfall as a Category 1 hurricane with maximum sustained winds of 75 mph at 1 a.m. CDT Tuesday about 20 miles northeast of Matagorda, Texas.

The center of Nicholas is now located near Houston. Bands of heavy rain and gusty winds are hammering the upper Texas coast and parts of Louisiana.

More than 300,000 homes and businesses are without power in southeast Texas, including the Houston area, as of 7 a.m. CDT, according to poweroutage.us.

Winds gusts over 50 mph have been clocked at Houston’s Hobby airport this morning. Parts of the far southeast Houston metro area have picked up 4 to 7 inches of rain in the past 24 hours.

Galveston, Texas, has the highest storm total rainfall so far with 13.96 inches as of early Tuesday.

A storm surge of 3 to 4 feet above normal tide levels has been observed this morning on the upper Texas coast, including around the Galveston Bay area.

A topical storm warning is in effect from San Luis Pass, Texas, to Cameron, Louisiana, as well as some inland counties near the coast, including the Houston metro area. This means tropical-storm-force winds (39+ mph) are expected to continue in southeast Texas through this morning and will spread into coastal southwest Louisiana by this afternoon.

Nicholas will weaken to a tropical depression and as it gradually turns more to the northeast and then east over eastern Texas and Louisiana through Wednesday and into Thursday.

Here’s a look at the expected forecast impacts from Nicholas.

The potential for major rainfall flooding will be the most widespread threat from Nicholas going forward.

Nicholas could produce storm total rainfall amounts of 5 to 10 inches (locally up to 20 inches) from the upper Texas coastline to central and southern Louisiana, far southern Mississippi and far southern Alabama, according to NOAA.

Flash flood watches have been issued by the National Weather Service from coastal Texas into all of southern Louisiana and far southern Mississippi. This includes Houston, Lake Charles, Baton Rouge and New Orleans.

Do not drive through floodwaters of any depth and be sure to stay aware of the latest forecast and warning information if you live in a flood-prone location.

(MORE: Deadliest Year For Flooding Since 2017)

Nicholas will produce tropical-storm-force winds within the warning areas along the upper Texas coastline and southwest Louisiana through Tuesday.

Stronger wind gusts might cause some tree damage and scattered power outages in spots. The winds could also down some trees, especially where soil becomes saturated from Nicholas’ heavy rain.

Storm surge is predicted to be the following heights above normal tide levels if the peak surge occurs at the time of high tide, according to the NHC.

-3 to 5 feet from Sargent, Texas, to High Island, Texas, including Galveston Bay.

-2 to 4 feet from High Island, Texas, to Rutherford Beach, Louisiana.

-1 to 3 feet from Port Aransas, Texas, to Sargent, Texas.

-1 to 3 feet from Rutherford Beach, Louisiana, to Intracoastal City, Louisiana.

-1 to 3 feet in Sabine Lake and Calcasieu Lake.

These peak surge values may linger in the hours after the center of Nicholas moves ashore especially along and to the east of the center.

As often is the case with landfalling storms, a few tornadoes are possible in Nicholas’ rainbands, generally to the north and northeast of the center into Tuesday from the upper Texas coast into southern Louisiana.

Nicholas became the 14th named storm of the 2021 Atlantic hurricane season late Sunday morning over the southwest Gulf of Mexico.

Nicholas strengthened into the 6th hurricane of the season at 10 p.m. CDT Monday night. It made landfall just northeast of Matagorda Bay, Texas, about 3 hours later as a Category 1 with maximum sustained winds of 75 mph.

The upgrade to hurricane strength was prompted by a WeatherFlow sensor at Matagorda Bay, Texas, recording sustained winds of 76 mph and a gust to 95 mph.

Several locations along the Texas coast have clocked wind gusts at least to 60 mph.

Port O’Connor, Texas, measured gusts up to 71 mph Monday evening, and water levels rose quickly, with 3 feet of inundation, according to a NOAA gauge.

Storm surge and rainfall flooding prompted the closure of the only road from Matagorda to Matagorda Beach, Texas.

Some minor areas of high water were reported on feeder roads adjacent to the Gulf Freeway (Interstate 45) in Galveston County, and on Broadway in the city of Galveston, according to the National Weather Service.