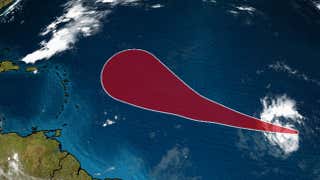 Tropical Storm Sam has formed in the eastern Atlantic Ocean and may become a hurricane by Friday. However, it’s uncertain whether it will strike the Leeward Islands next week.

The National Hurricane Center upgraded Tropical Depression Eighteen to Tropical Storm Sam late Thursday morning as it was about 1,750 miles east-southeast of the northern Leeward Islands in the eastern Atlantic Ocean.

An Uncertain Future For Leeward Islands

It’s not yet clear if Sam will ever threaten land, but it will take its time.

Sam’s forward speed will slow down this weekend, as high pressure to its north acting as its initial steering wheel weakens.

According to the latest computer forecast models, Sam may not reach the longitude of the Lesser Antilles until the middle of next week.

Whether it passes over parts of the islands or bypasses them to the north is unclear, at this time.

Enjoy The Outdoors With This Portable Outdoor Fan (SPONSORED)

Residents in the Lesser Antilles, especially the northern Leeward Islands, should simply monitor the latest forecast for any possible changes.

Beyond that, the large majority of computer model forecasts eventually curl Sam away from the U.S. East Coast late next week or next weekend.

That’s because they’re forecasting a weaker, less expansive Bermuda high over the Atlantic Ocean and a stronger trough, or southward plunge of the jet stream, near the East Coast, as described in a previous article here.

That pattern would cause Sam to curl north, then northeastward into the central or western Atlantic Ocean, rather than simply plowing westward.

However, it’s far too soon to completely rule out Sam as a potential U.S. threat. That’s because the long-term steering forecast for Sam could change in future computer model forecasts updates.

Sam could at least generate high surf and rip currents along the East Coast more than a week from now even if it stays well offshore, as Hurricane Larry did earlier this month despite passing east of Bermuda.

Sam Could Become a Strong Hurricane

What is of higher confidence is that Sam will have an environment conducive for intensification into at least early next week, including low wind shear and increasingly warm water.

In this environment, Sam will likely become a hurricane by Friday or Saturday east of the Lesser Antilles, and could become a stronger hurricane by early next week.