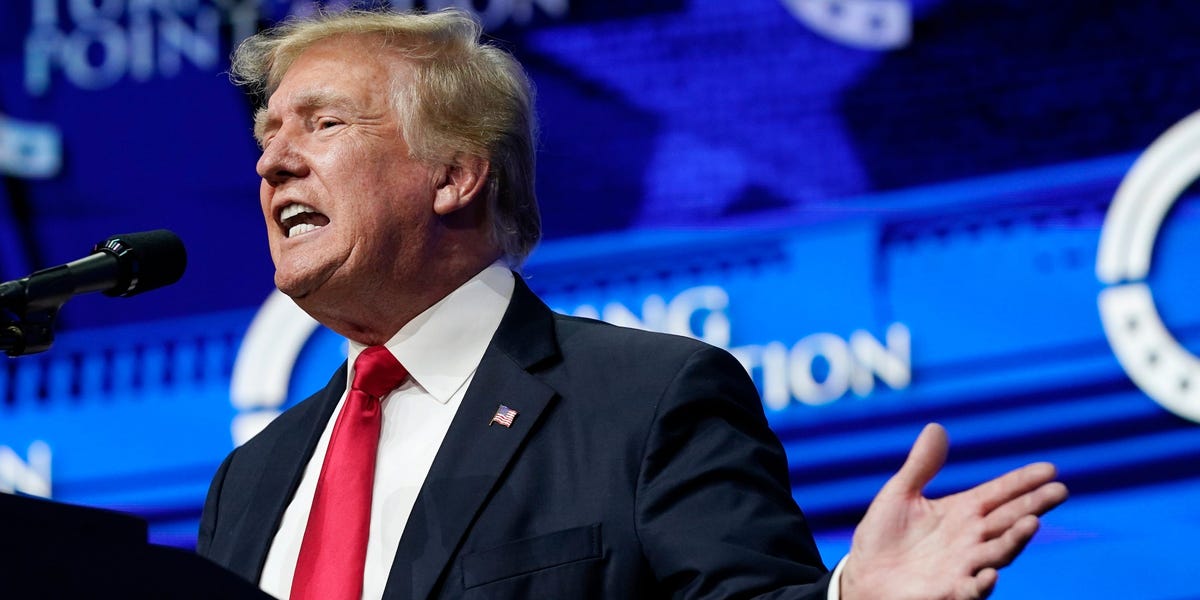 Former President Donald Trump continued to push false claims about the 2020 election, blasted his foes in Congress, and played all the biggest hits from his routine of grievances at Thursday’s National Republican Senatorial Committee’s retreat in Florida, a preview of the role he may play in the approaching 2022 midterm cycle.

Trump slammed Democratic leaders as “maniacs” and said they “cheat like hell, and they stick together.” Republicans “need to stick together,” he added, while also insulting GOP Sens. Mitt Romney and Ben Sasse, The Washington Post reported.

The former president also praised Chinese President Xi Jinping, highlighted his strong relationship with Russian President Vladimir Putin, and ranted about his opposition to windmills, one of his longstanding obsessions, in his speech to lawmakers and donors at at an event sponsored by the Senate GOP’s campaign arm.

“It’s so sad when you see that they are approving these windmills — worst form of energy, the most expensive,” Trump said, according to The Post. “You talk about carbon emissions, well they are making them. More goes into the air than if you ran something for 30 years.”

Trump’s appearance at the event came after he explicitly threatened Republicans against challenging his false claims that the 2020 election was stolen from him in a Wednesday statement that declared: “If we don’t solve the Presidential Election Fraud of 2020 (which we have thoroughly and conclusively documented), Republicans will not be voting in ’22 or ’24.”

Insider’s Kimberly Leonard previously reported from Palm Beach, the site of the retreat, that some Republicans were surprised that Trump was even invited. They were worried that Trump could hurt the party’s chances by doubling down on his 2020 election loss, an issue that may not a top motivating factor for voters while also telling them that elections are rigged and their votes may not count.

The former president is now making 2020 a litmus test for 2022. That includes pressuring GOP lawmakers in battleground states to conduct partisan reviews and examinations of the 2020 election nearly a year later, and endorsing candidates, like those for election administration positions in critical swing states, that back his false election claims.

In the process, Trump is causing headaches for GOP House and Senate leaders who are intent on recapturing both chambers in 2022.

Rep. Tom Emmer, the chairman of House Republicans’ campaign arm, reportedly distanced himself from the statement in a Thursday call with reporters, describing Trump as a “private citizen” who is “entitled to his opinion.”

One GOP strategist told The Post that Trump’s insistence on rehashing past elections “gives everyone cold sweats over the Georgia situation and the prospect he could have some impact again.”

Republicans got a worrying potential preview of coming attractions in the January Senate runoffs in Georgia, when after nearly two months of Trump claiming the 2020 election in the state was rigged, two Democrats defeated incumbent Republicans Sens. David Perdue and Kelly Loeffler and returned the chamber to Democratic control for the first time since 2013.

Rural, predominantly Republican areas of Georgia saw the largest drop-offs in voter turnout between the November 2020 general election and the January 2021 runoffs, an indication of the struggles the party may face without Trump at the top of the ticket while his election lies dominate GOP politics.

Rep. Don Bacon, a Republican representing a competitive House district in Nebraska, told The Post that the GOP “will lose” if lawmakers focus on the past instead of the future.

“Right now, if the party focuses on Afghanistan, inflation, the border, crime — we are going to win big,” Bacon told The Post. “If the party wants to make it about the election is rigged, we will lose. Independent voters don’t respond well to that. If we keep the focus right, I think we’re going to win big in 2022.”

GOP Rep. Roger Williams of Texas similarly told CNN: “I’m a President Trump guy. But we’ve got to focus on 2022.”